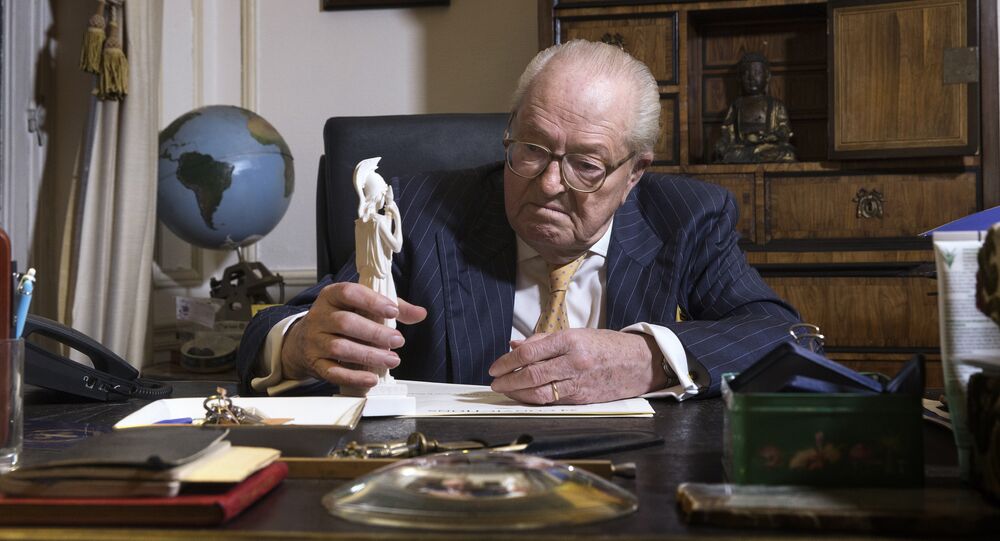 The expelled founder of the right-wing Front National (FN) Party in France, Jean-Marie Le Pen has threatened to set up a party to rival FN, which is now led by his daughter Marine, in a threat seen as deliberately damaging her chances of becoming France's first female president.

© AP Photo / Claude Paris
Le Pen Family Feud: Hints of Thaw Ahead of Presidential Race
Jean-Marie Le Pen was expelled from the Front National six months ago after repeating contentious remarks about the holocaust — and there is no love lost between father and daughter.

She is attempting to start her campaign to run for the presidency in 2017, but is beset with party problems. Marine has moved the party from the hard right towards the center and softened its line on racism, but has faced severe criticism over her performance in the regional elections in December.

Now her father has published an open letter on Tuesday, which calls for "the unity of the movement" and to "close the open fault, which already arouses ambitions among potential candidates who, by their presence, threaten your chances to be included in the second round," in a clear reference to rivals for the nomination for the presidency within the Front National.

In a barely disguised threat, he wrote:

"If our approach is not successful, aware of the terrible dangers that threaten our country, we will not give up, and then reluctantly act outside the National Front."

Marine Le Pen's party is beset with acrimony following its defeat in the December regional elections, leading to calls for "reforms" and even a name-change, which goes to the heart of the Le Pen family's grip on the party.

Despite having won six out of 13 regions in the first round of voting on December 6, Le Pen's party did not manage to win powers in a single region after the second round of voting on December 13 — despite winning 6.8 million votes, it's largest ever score. Le Pen had been hoping that the party's first victory ever in regional elections would act as a springboard for her campaign to run for the presidency in 2017.

© AP Photo / Francois Mori
Le Pen's Front National Party in Disarray After Election Defeat
He said: "Nothing is taboo, everything is possible."

Jean-Marie's intervention to draw the party together again around him — which is hard to imagine given the fact that he is expelled — and the threat to set up a right-wing rival is a further sign of the chaos that is going on within the Front National.

But it is also a sign that the father is prepared to go to the ultimate limits, even if that mars his own daughter's chances of campaigning to be the first female French President.