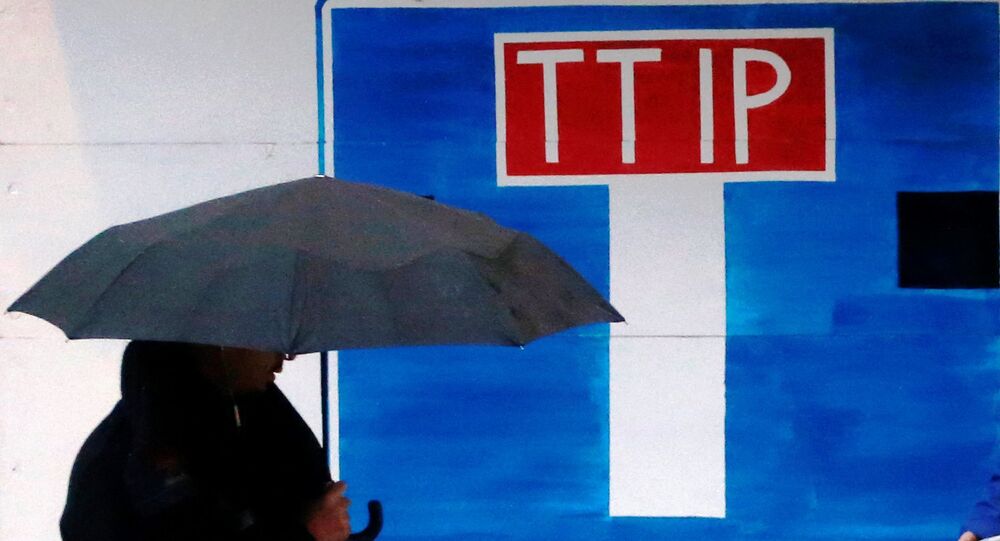 The latest round of talks over the controversial Transatlantic Trade and Investment Partnership (TTIP) have run into yet more problems, with major opposition to a mechanism that many feel will allow multinational companies to ride roughshod over regulators.

The TTIP negotiations could lead to the creation of the biggest trade pact in the world, between the European Union and the United States. However, the talks have been beset by controversy — not least over the massive lobbying by multinational companies, with critics saying they are attempting to water-down EU regulations.

Guy Taylor from Global Justice Now told Sputnik there was a "growing movement of ordinary people across the EU & the US gaining knowledge and understanding about the deals (despite the best efforts of our governments and media).

"From the 3.2 million people who signed their opposition in the European Citizens' Initiative last year, to the trade unions and community organizations saying 'no' to the deals, we are building a force that will be hard to resist."

Critics of the TTIP deal point to the fact the European food regulations are different from — and some say more stringent than — those in the US. They also fear strict European environmental regulations will be flouted under the proposed deal.

The 12th #TTIP negotiation round kicks off with a handshake (between the Chief US & EU Negotiators). pic.twitter.com/JNQ5RB9kBr

But the most controversial issue is the Investor-State Dispute Settlement (ISDS) mechanism which opponents say would enable corporations to sue governments in secretive, supra-judicial courts for bringing about legislation that would harm their profits.

Thus, if a US multinational company lost profits because their product or service was banned by law for health or other reasons. Critics believe large multinational companies — which have been lobbying hard for the TTIP — will force through a trade agreement that would reduce the ability of democratically-elected politicians to regulate the market.

According to campaign group Global Justice Now, the European Commission has been massively taken aback by the strength of feeling about ISDS. They carried out a public consultation in 2014 and 97% of the thousands of response they received were negative.

"There is a huge crisis over the form of Investor protection or 'ISDS' as it was once known. As the most contentious part of TTIP, it has attracted huge criticism amongst Members of the European Parliament and in the public domain as well," Taylor told Sputnik.

"In 2014, 150,000 responded to a European consultation on the issue and 97% of those responses were very negative. Since then, the trade commissioner in Brussels has dreamt up the Investor Court System as a proposed alternative. It has been made very clear that ICS is not alternative, more a repackaging of the dangerously flawed ISDS. Earlier this month, the largest association of German Judges completely slammed the ICS idea as undemocratic and undermining the sovereignty of domestic courts.  Slowly, our representatives in Brussels are beginning to realize this."

As one example of how the ISDS is being used by big business to sue government, Global Justice Now says US agribusiness giants Cargill and Archer Daniels Midland have successfully sued Mexico for introducing a 'sugar tax' on the sales of soft drinks containing high-fructose corn syrup.

Taylor told Sputnik the British In-Out referendum on membership of the EU could also scupper the talks.

"You might have noticed, but there is going to be a referendum on membership of the EU in the UK soon. Everything is up for grabs. If the UK votes to leave the EU, TTIP will probably still apply to us. In the horse-trading and arguments that will rage between now and the day of the vote, there will be concessions and deals struck — maybe, just maybe, TTIP could become a casualty," Taylor told Sputnik.

TTIP 'Could Prevent Tax Justice' Amid Concerns Over Corporate Courts