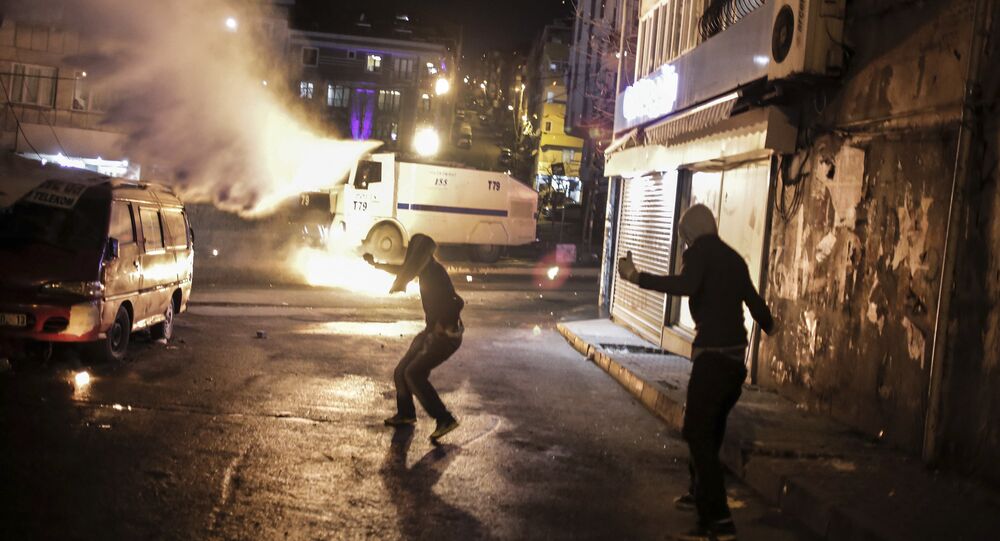 The Turkish government's current woes are the result of a series of mistakes, which have recently included the shooting down of Russia's Su-24 bomber and demands that the US back its position against the Kurds, the Washington Post recounted on Saturday.

© AFP 2021 / OZAN KOSE
What Could Italy's Investigation Against Erdogan Find?
Recep Tayyip Erdogan and his government are facing a multitude of problems and have isolated Turkey internationally by believing their own hubris about Ankara's influence, the Washington Post (WP) wrote on Saturday.

The country is facing economic depression, terrorist attacks, a failure of its Syrian policy and a rebuff from Washington after demanding that the US back its campaign against the Syrian Kurdish YPG, one of the most effective fighting forces against Daesh, wrote author Liz Sly.

In addition, Erdogan has sought unsuccessfully to revive pressure on the United States to agree to long-standing Turkish proposals for the creation of a safe zone in northern Syria.

"Erdogan has mismanaged foreign policy because of hubris," Henri Barkey, a Turkey expert at the Wilson Center in Washington, told WP.

"He was overconfident in 2010 that Turkey was the darling of the world, and that went to his head. There are setbacks that are not of his doing, but how he managed those setbacks are his doing."

© AP Photo / Lefteris Pitarakis
In this photo taken from the Turkish side of the border between Turkey and Syria, in Akcakale, southeastern Turkey, a Turkish soldier on an armoured personnel carrier watches as in the background a flag of the Kurdish People's Protection Units, or YPG, is raised over the city of Tal Abyad, Syria, Tuesday, June 16, 2015
Those setbacks include the US' waning influence in the Middle East, and the increased influence of Russia. The downing of Russia's Su-24 bomber was a "major miscalculation" that damaged relations with Moscow and resulted in sanctions targeting Turkish goods, transportation and tourism, Sly wrote.

Threats by the Turkish president to send troops in Syria "would risk a confrontation with Russia that Turkey would almost certainly lose," wrote the author.

© AP Photo / Basin Bulbul, Presidential Press Service Pool
Angry Bird: Erdogan 'Continues to Play the Fool as He Paints Himself Into a Corner' - German Newspaper
The Turkish army is at war with PKK militants in towns in its southeast after a two year ceasefire collapsed last year, and "blowback from the Syrian war in the form of a string of suicide bombings in Istanbul and Ankara, most recently on Wednesday, has brought fear to Turkish streets and dampened the vital tourist industry."

However, Erdogan has put himself in a difficult position, Gokhan Bacik, professor of international relations at Ankara’s Ipek University, said.

"I’m not saying that Turkey has lost its mind and is poised for war, but the posture in Ankara is very strange and could lead to surprises," he said, and warned that "Turkey is facing a multifaceted catastrophe."

"This is a country that has often had problems in the past, but the scale of what is happening now is beyond Turkey’s capacity for digestion."

UAE Could Replace Turkey in Deliveries of Fruits, Vegetables to Russia