Russian Foreign Ministry spokeswoman Maria Zakharova has commented on the pledge made by some MPs from Council of Europe member states to go on a hunger strike in support of Nadezhda Savchenko, a suspected accomplice in the killing of two Russian journalists in Ukraine, calling it “utter hypocrisy” and a “political farce.”

© Sputnik / Sergei Pivovarov
Savchenko Admits to Directing Ukrainian Artillery Fire
“Members of parliaments of 22 member states to the Council of Europe intend to hold a hunger strike in support of Nadezhda Savchenko, detained in Russia as a suspected accomplice in the killing of two Russian journalists during the early stages of the conflict in eastern Ukraine,” Zakharova wrote on her Facebook page.

“What utter hypocrisy! First they illegally elected Savchenko a deputy, included her in a delegation and then staged a political farce, in staging a hunger strike,” she added.

All that's left for the MPs to do now is form a choir in the EU parliament entrance halls, Zakharova continued.

The foreign ministry spokeswoman suggested that if the deputies are so sure of Savchenko’s innocence, it would make more sense to encourage the investigation and search for the killers of the Russian journalists.

However, the lack of any action towards supporting the investigation and the absence of any media coverage  towards or media coverage only speaks of the indifference towards the fate of the Russian journalists or Savchenko herself. 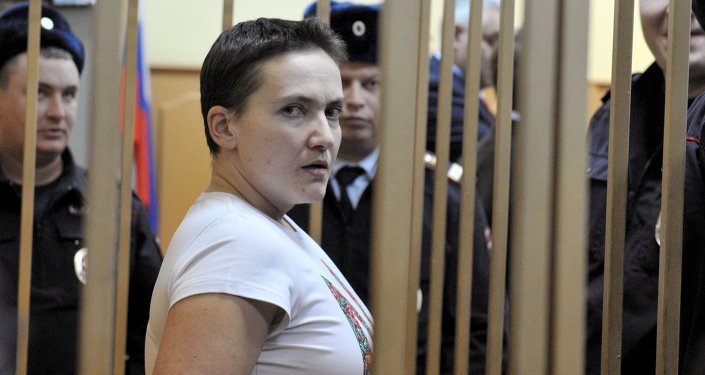 © Sputnik / Sergey Kuznecov
Savchenko's Notes Prove Involvement in Russian Journalists' Killing
The fate of the Russian journalists has been entirely forgotten by the deputies, Zakharova added, reminding her Facebook audience that they were killed performing their journalistic duty, not on a tourist trip.

Savchenko has been in pretrial detention in Russia since summer 2014, as a suspected accomplice in the killing of two Russian journalists during the early stages of the conflict in eastern Ukraine.

Russian investigators believe that Savchenko was a fire spotter during a mortar attack near the eastern Ukrainian city of Luhansk on June 17, 2014, that killed two Russian journalists, Igor Kornelyuk and Anton Voloshin.

Savchenko Back in Russian Pretrial Detention Center After Hospital