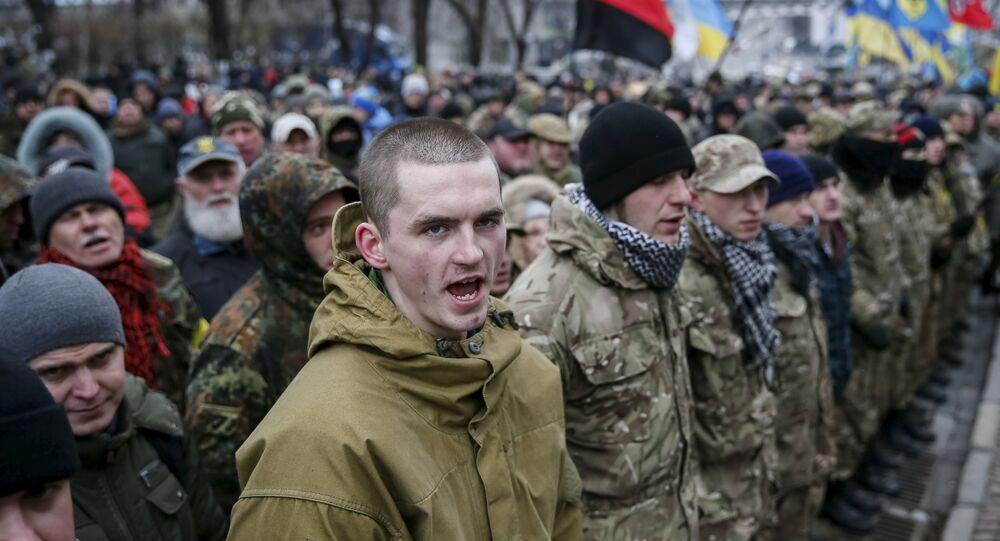 On Saturday, ultra-nationalist protesters descended on central Kiev, clashing with the National Guard, attacking Russian banks and holding a meeting in the city's Independence Square (Maidan); the clashes come ahead of the 2nd anniversary of the bloodiest day of Euromaidan, a political protest movement which resulted in the coup of February 2014.

On Saturday, meetings in Kiev commemorating the bloodiest day of violence between police and protesters during the February 2014 protests turned ugly, with activists from ultra-nationalist groups including the Right Sector clashing with Ukraine's National Guard in the center of the city.

"I am witnessing clashes between the Right Sector and national guards. Right Sector activists told us they were attempting to bring tents to the Maidan [so that] demonstrators could stay warm," a correspondent from Ukraine's News One reported on Saturday.

© AFP 2021 / PEDERSEN, TERJE / NTB SCANPIX
Not My Maidan: Orange Revolution's Leader Calls Ukraine's Current Crisis 'Most Hopeless' Yet
Militants from the Right Sector and other nationalist organizations, it is worth noting, were instrumental in assuring the victory of the February 2014 Maidan protests. At that time, they clashed with riot police and took over government buildings ahead of the coup against the government of Viktor Yanyukovych on February 21.

The Maidan, Kiev's independence square, is the traditional center for revolutionary-minded protesters, from the 'Orange Revolution' of 2004 to the Euromaidan protests of late 2013 to early 2014.

Saturday marked the two-year anniversary of the bloodiest day of clashes between protesters and police, with over one hundred people, including nearly twenty police officers, killed between February 18 and February 21, 2014.

Earlier in the day, nationalist protesters who had gathered in the city attacked branches of two Russian banks – Sberbank and Alfa-Bank. Protesters threw rocks and broke several windows at a Sberbank branch, while others broke into an Alfa-Bank and smashed it up from the inside with metal bars, RT reported.

​In the late afternoon, hundreds of anti-government protesters, including members of Right Sector, the Aidar Battalion and other paramilitaries, many of whom have been involved in fighting in the country's east, blocked off Khreshchatyk, the main street of the Ukrainian capital, and marched onto Independence Square, calling on Kiev residents to stage an open-ended strike.

​Also on Saturday, local media reported that about 50 men in military fatigues from the 'Radical Right Forces', an amalgamation of the country's right wing organizations, including the Right Sector, had taken over the Kazatskyy Hotel, which overlooks Independence Square, and established their headquarters there.

© AP Photo / Matthias Schrader
Poroshenko Says Ukraine's Pro-EU Course 'Irreversible'
Despite the takeover, it is reported that the hotel remains open for business, with militants setting up camp in the lobby and allowing guests in and out of the building.

In the evening, activists pitched about half a dozen tents and light barrel fire pits on Independence Square, with others distributing hot tea and sandwiches and bringing in firewood.

Into the night, protesters held a 'people's assembly', making speeches and unfurling signs, including one which threatened Prime Minister Arseniy Yatsenyuk with a 'bullet to the head'.

​"We wish for a dialogue. We want to discuss what they [the government] have done over the past two years and what they are going to do, what their action plan is and how they see our future. We want our people to have a chance to talk to them and to express their demands. If no response follows, we will stay another night, and a third. It will be a peaceful action, a search for dialogue," one demonstrator said, according to Ukrainian news portal UNN.

For their part, the 'Radical Right Forces' issued a manifest, calling for "the legal dismissal of the president and the government."

​"While in Russia the working day is drawing to a close, in Kiev, the work is just beginning. 'Welcome to Maidan'."

"We are calling on members of all initiative groups all over Ukraine to set up tent camps for peaceful demonstrations and to coordinate action with the central headquarters," the statement released Saturday reads. The radicals promised to release a finalized list of demands on Sunday.

The meeting has continued into Sunday, with several dozen protesters remaining on the square throughout the night, Russia's RIA Novosti reported.

On Sunday, local news resource espreso.tv reported, citing their own sources, that the Radical Right Forces occupying the Kazatskyy Hotel were given an ultimatum  to leave the hotel. Otherwise, they were told, "force may be used against them."

At the same time, other media reported that the protesters have been met by the heads of the Kiev city police, the deputy minister of internal affairs, and Ukraine's defense minister, who promised that force would not be used against the demonstrators.

​"The leaders of the Ministry of Internal Affairs held talks with the activists."

Also on Sunday, Channel 112 Ukraina reported that a scuffle had broken out between police and demonstrators near the Trade Unions Building, which overlooks Independence Square.

"A truck, believed to contain materials for erecting a stage, approached the Trade Unions Building…As soon as the truck drove up, about a hundred people approached it [from the square]. Law enforcement blocked the truck, and a clash took place. No one was injured…Ten minutes later, the truck turned back and drove off in the direction of the European Square. People returned back [to the square] and law enforcement also left," a correspondent from the TV channel said.

© REUTERS / Anastasia Sirotkina/Pool
Ukrainian Lawmakers Submit Bill to Use Term 'Muscovy' Instead of 'Russia'
An Internal Affairs Ministry spokesman quickly denied the report, saying that the supposed clash near the Trade Unions Building was just a misunderstanding. "There was no scuffle. They just had a talk," the spokesman said.

Russian business newspaper Kommesant reported that the activists will hold another 'people's assembly' meeting Sunday evening, where protesters will issue demands, "including the resignation of the government."

Speaking to the newspaper, Ruslan Bortnik, the head of the Ukrainian Institute for the Analysis and Management of Policy, said that for now, the situation remains calm, but complex. "If the authorities fail to resolve the situation quickly and peacefully, they could witness large-scale protests," the expert noted.

Meanwhile, one source within the Ukrainian parliament told the newspaper that the new protests were a case of "pro-Russian forces attempting to provoke, incentivize and reconstruct the events of two years ago."

Another source who is close to the contact group on peace in eastern Ukraine, meanwhile, said that the protests were an indication that "as soon as the situation on the settlement of the problem of Donbass begins to move toward peace, radicals in Kiev begin to undermine it."

Ukrainian Lawmakers Submit Bill to Use Term 'Muscovy' Instead of 'Russia'