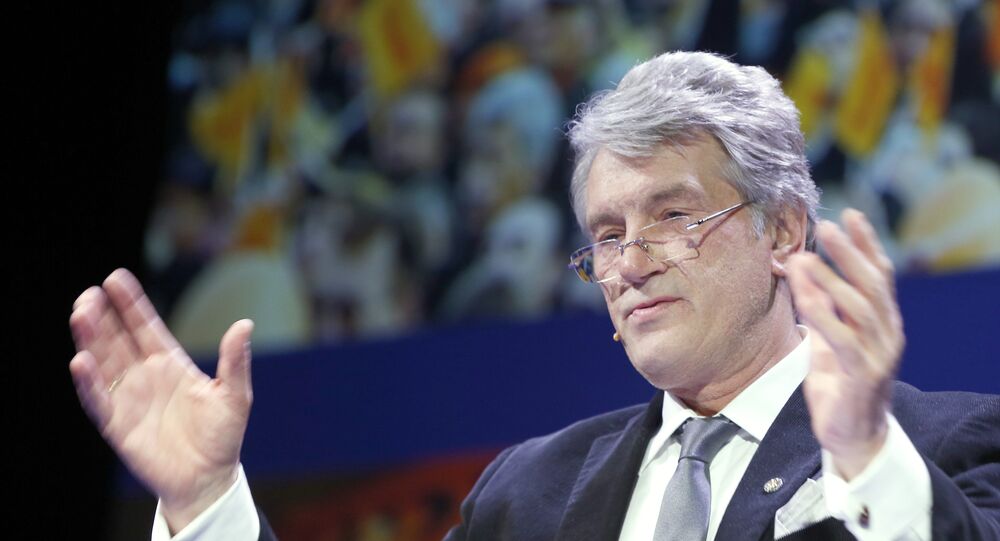 Ukraine remains in the grip of "the most hopeless crisis" since the early 1990s, with the current government holding full responsibility for the ongoing turmoil, according to former Ukrainian President Viktor Yushchenko, who came to power after a series of protests during November 2004 - January 2005 known as the Orange Revolution.

© Sputnik / Stringer
'Most Obvious Coup in History': Ukraine in Chaos Since the US Decided 'Yats is Our Guy'
In an interview with the Ukrainian newspaper Segodnya, former Ukrainian president Viktor Yushchenko blamed his country's current government for what he descried as "the most hopeless crisis" in Ukraine since the early 1990s.

According to him, the country's problems are not limited to political gridlock because Ukraine is also going through economic, monetary and security crises.

"The political crisis is something that is wrapped around it all, and the situation itself looks like the most profound and, to some extent, most hopeless crisis since the early 1990s," Yushchenko said.

He pointed the finger at the Ukrainian authorities for the ongoing chaos.

"The political coalition, namely, the party of power, bears the responsibility for what is now happening in the country," Yushchenko pointed out.

He also pointed to the Ukrainian currency, the hryvnia, losing 350 percent of its value within the past 18 months, which Yushchenko said indicates the opening of "a second front" of the war, which is "more frightful that the first military front."

This is an especially sore spot for the former president; Ukraine's currency was introduced when Yuschenko was chairman of the National Bank of Ukraine between 1993 and 1999 and Ukrainians know him as the "father of the hryvnia".

His remarks came after Ukrainian Prime Minister Arseniy Yatsenyuk described the ongoing political crisis in his country as "artificial", and urged the Ukrainian society to continue on a reform course.

© AFP 2020 / ALEXANDER NEMENOV
US, Russia Made No Secret Deal Linking Syria Solution With Ukraine Crisis
On Tuesday, Yatsenyuk's government survived a vote of no confidence in parliament despite a rapid decline in Yatsenyuk's popularity in the country and incumbent Ukrainian President Petro Poroshenko's explicit demand that he step down.

Ukraine's southeast has been engulfed in a conflict since April 2014, after Kiev launched a military operation to suppress local militia who were resisting a government they claim was installed in a coup.

Washington and its allies accused Moscow of fueling the conflict and introduced several rounds of sanctions against Russia. Moscow has consistently denied the allegations.

The Price of War: Drone Footage of Ukraine's Deadliest Battlefield