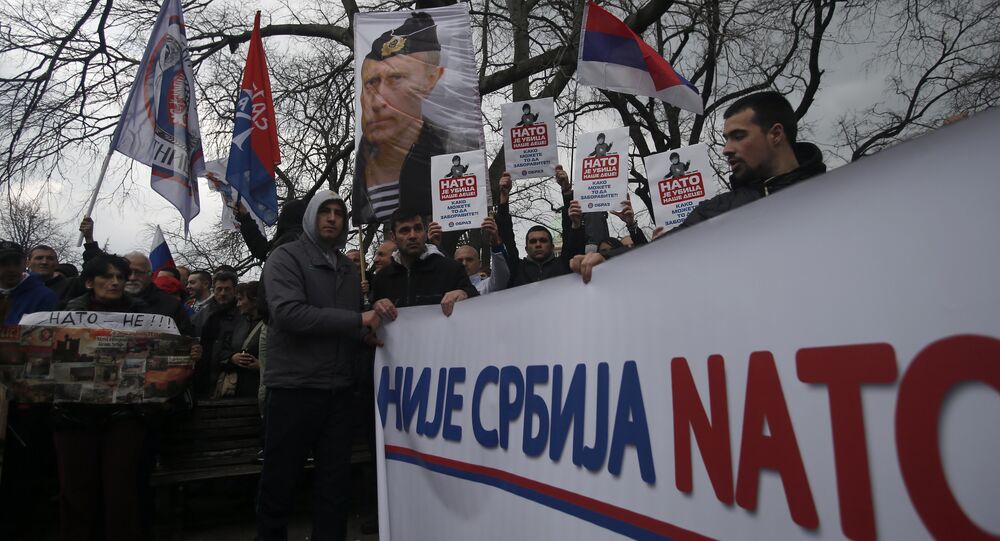 Up to 2,000 patriotic activists protested against Srbia's cooperation with the North Atlantic Treaty Organization (NATO) in Belgrade.

BELGRADE (Sputnik) – Patriotic activists of the Republic of Serbia gathered in front of the Russian Embassy in Belgrade to express peaceful opposition to their country’s cooperation with the North Atlantic Treaty Organization (NATO) on Saturday.

Up to 2,000 people carrying Serbian and Russian flags gathered outside the Russian mission in the Serbian capital, according to unofficial estimates. Many expressed indignation over the death of two Serbian diplomats kidnapped last November who were killed in US airstrikes on Libya on Friday.

That day, Serbian President Tomislav Nikolic signed a confirmation of his country’s cooperation plan with the Western alliance. Serbian lawmakers ratified a diplomatic immunity agreement and logistical support for NATO representatives on February 12.

Serbia was among the former Yugoslav republics to be invited to join NATO’s Partnership for Peace program – the alliance’s pre-membership program – in 2006.

© REUTERS / Sabratha municipality media office
Two Kidnapped Serbian Diplomats Killed During US Airstrikes in Libya
It agreed to deepen cooperation with NATO through the Individual Partnership Action Plan in January 2015, which took effect in March 2015, shaping educational and technical cooperation, joint exercises and efforts to form a positive image of the alliance among Serbian society.

NATO carried out a 1999 bombing campaign over Serbia in support of the Kosovo Albanian population.

Russia views NATO’s eastward expansion as a threat to its national security and a breach of the military bloc’s post-Soviet pledge not to encroach on Russian borders.