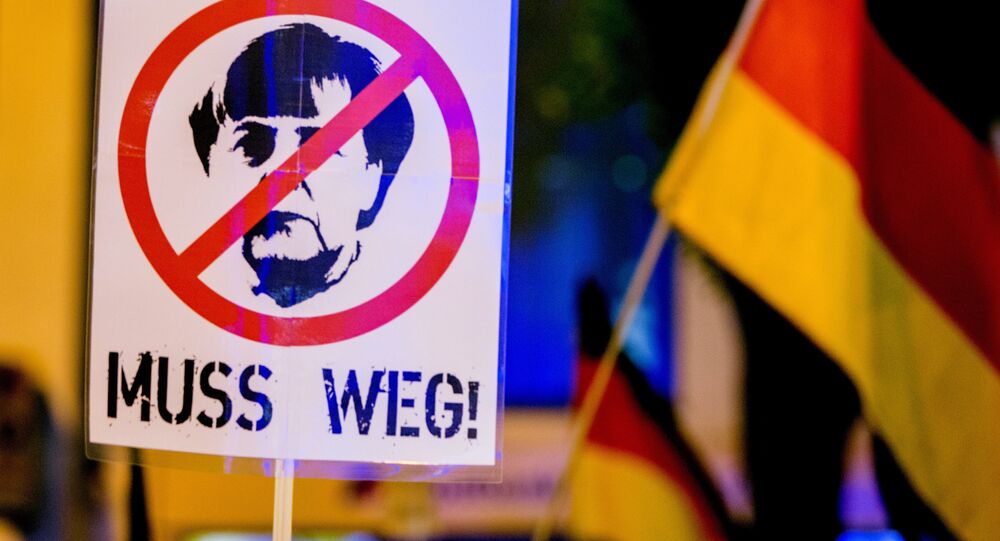 Angela Merkel's migration policy is doomed to failure, and her decisions on the issue indicate her "infinite arrogance and political incompetence", according to Frauke Petry, head of the right-wing, Eurosceptic party Alternative for Germany.

© AP Photo / Markus Schreiber
Merkel Under Fire in Legal Threat Over Refugees From Coalition Partners
German Chancellor Angela Merkel prefers to turn a deaf ear to criticism related to her migration policy, which is doomed to flop, RIA Novosti quoted Frauke Petry, head of the right-wing party Alternative for Germany (AfD), as saying.

She condemned Merkel's statements that self-isolation cannot be a solution to the migration crisis, and called on the German Chancellor to heed the criticism.

"Merkel's statements are nothing but an indication of boundless arrogance and political incompetence. She takes decisions that are doomed to failure instead of taking the advice of [her] European partners," Petry added.

Her remarks came after the German news network Deutsche Welle reported that the Bundestag does not rule out Merkel's resignation because she "always said she wants to avoid a scenario of her losing the elections like Helmut Kohl and that she may step down on her own."

© REUTERS / Fabrizio Bensch
Germany's Spending on Refugees May Reach Unprecedented €50 Billion by 2017
Elections in three of Germany's federal states will be held in mid-March, and Merkel's Christian Democratic Union party runs the risk of losing the vote, which will be blamed on the Chancellor, according to Deutsche Welle.

Merkel, who enjoyed high popularity ratings early last year, has grown increasingly isolated in recent months and public pressure has skyrocketed for her to abandon the country's open-door policy toward refugees arriving from the Middle East and Africa.

An opinion poll conducted in late January revealed that at least forty percent of Germans are not satisfied with the country’s migrant policy and want Merkel to resign.