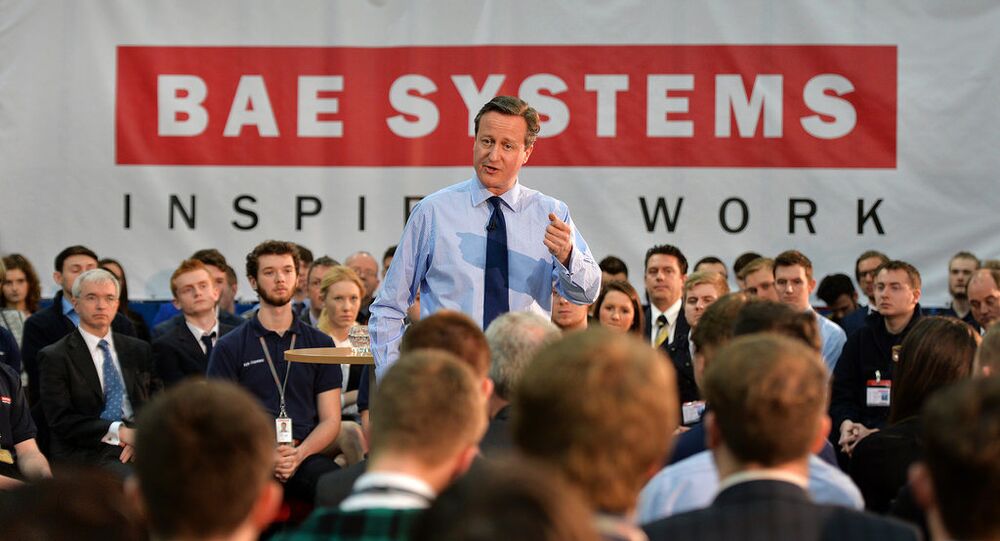 While thousands have been killed and millions more injured and displaced as a result of fighting in the Middle East, British defense company BAE systems has seemingly cashed in on the conflict, posting a sharp rise in revenue due to the sale of products to Saudi Arabia.

© AFP 2020 / FAYEZ NURELDINE
UK Has to Stop Selling Arms to Saudi Arabia if 'Cares About Human Rights'
BAE's sales rose by 7.6 percent in the past year to US$25.7 billon (£17.9bn), while the company's share price eclipsed earlier forecasts.

The company, which specializes in selling aerial and naval military products, as well as munitions and warfare systems, recently announced job cuts and a scaling down of production due to a lack of demand.

However, the increase in fighting in Syria and Yemen has seemingly boosted demand and subsequently the company's sales.

BAE confirmed it had increased aircraft deliveries to Saudi Arabia and struck a deal to supply the Gulf kingdom with 22 more "Hawk Advanced Jet Trainer" aircraft, along with additional ground equipment training aids.

The announcement of increased profits comes at a time of high debate about arms sales to Saudi Arabia, with many campaigners concerned about reports of alleged Saudi war crimes and breaches and international law associated with Riyadh's bombing campaign against Houthi rebels in Yemen.

A number of international organizations have called for the British government to immediately suspend the sale of arms to Saudi Arabia and cancel revoke any licenses until a proper investigation into such claims is carried out.

© AFP 2020 / Oli Scarff
Britain Headed for 'Very Embarrassing' Court Case Over Saudi Arms Sales
The UK-based Campaign Against Arms Trade (CAAT) has initiated legal action against the government over the matter, arguing that the country's continued sale of arms to Riyadh is in breach of international guidelines.

A recent UN report found that 21 million people are in need of some sort aid in Yemen, with the country experiencing a "humanitarian catastrophe" as a result of the conflict, which has killed approximately 6,000 people, including 3,000 civilians, since March 2015.

CAAT spokesperson Andrew Smith told Sputnik the UK needed to review its policy in regards to exporting arms to Saudi Arabia if the humanitarian condition was to improve.

The UK has been accused of cashing in on the conflict, with government statistics revealing British military sales to Saudi Arabia increased dramatically following Riyadh's March 2015 announcement that it would be undertaking an aerial campaign against Houthi rebels.

© REUTERS / Khaled Abdullah
Houthi militant stands guard outside the house of court judge Yahya Rubaid after a Saudi-led air strike destroyed it, killing him, his wife and five other family members, in Yemen's capital Sanaa January 25, 2016.