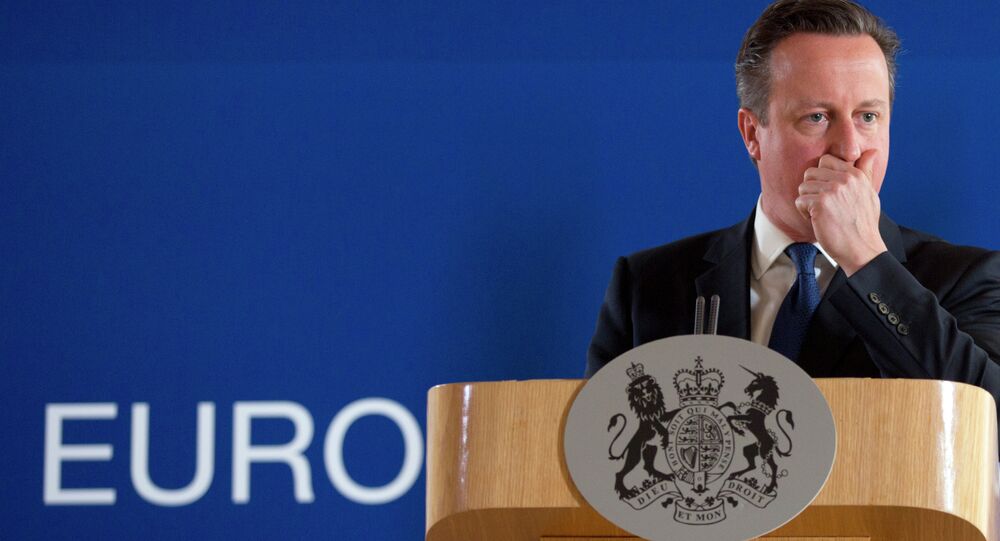 Cameron Rolls Dice in Biggest Gamble of His Political Career

UK Prime Minister David Cameron is staking his career on today's European Council talks on negotiating a new settlement for Britain's membership of the European Union (EU), but is facing political oblivion if he fails.

© REUTERS / Neil Hall
UK Pollsters Scramble Over Brexit Uncertainty
Cameron's Conservatives have been split over membership of the EU ever since the UK joined the European Economic Community (EEC) in 1973. At that stage, the EEC was mainly a trade agreement, which the Conservatives broadly supported, but it quickly developed into more than that causing many in the party to raise fears over attempts to create a federal union.

When she was UK Prime Minister, Margaret Thatcher was a force to be contended with, demanding a rebate of its annual contribution because of the country's poor economic state and the fact that its agriculture industry was smaller and did not benefit as much from the substantial subsidies enjoyed by others. She won an opt-out from the Exchange Rate Mechanism — the precursor to the Eurozone.

However, under Conservative Prime Minister John Major, things really began to slide. The Maastricht Treaty of 1992 created the European Union, which included the establishment of the euro (which the UK also opted out of), as well as the principle of freedom of movement of people, goods, services and capital. The treaty rocked the Conservatives, split the party and Major lost the 1997 general election, putting the party out of power for 13 years.

When Cameron came to power in 2010, his party was still deeply divided over Europe and there was a gradual rise in Euroskepticism throughout the country, which saw the rise of the anti-EU UK Independence Party (UKIP), which threatened to be joined by Cameron's Euroskeptics and lose him the 2015 election. He decided to offer Britain an In/Out referendum by late 2017 in an effort to settle the issue once and for all — he will not.

His demands to renegotiate the UK's membership conditions are meeting with strong opposition from other member states. One of the biggest issues is his demand that the UK be allowed to withhold benefits from non-UK EU citizens working in Britain — particularly for Eastern European nations who believe the demand is discriminatory.

The pro-Europe Cameron is now playing with fire. If he cannot get agreement over a new settlement for the UK, he will be seen to have failed. If the negotiations drag on into another emergency summit he will be seen as looking more desperate.

There is still no guarantee that we will reach an agreement. But it's my goal to do the deal this week https://t.co/hfFr8hJ1IO #UKinEU #EUCO

If he wins a renegotiation, he will have to put the terms of it to his own party first, which is split on the issue, with many — including many parts of the British media — saying he has not won enough concessions. He is desperate to keep the UK within the EU, but knows he has to win substantial reforms from his European counterparts, which he cannot by any means guarantee.

If it comes to the referendum — which he hopes to be able to call in June this year — and Cameron loses, he will be left with little option but to resign, throwing the country into disarray.

© REUTERS / Yves Herman
Cameron to Warn Brexit May Lead to Emergence of Refugee Camps in England
It is unlikely his preferred successor and close ally, Chancellor George Osborne will come out untainted, spoiling his chances of becoming leader.

Step forward the hugely popular Mayor of London, Boris Johnson. He has made no secret of his Euroskepticism in the past and Cameron spent 40 minutes with him on Wednesday evening, ahead of the summit. Cameron wants Johnson to back staying in, but Johnson is reported to have said Cameron had not done enough.

If Cameron fails to do the deal in Brussels, or if he brings back a piece of paper that is worthless, Johnson could lead a popular campaign to take the UK out of the EU, backed by heavy-hitters from within the Conservatives. In that scenario, it could swing the vote, put Cameron out of power and the crowd-pleasing Boris into Number 10.