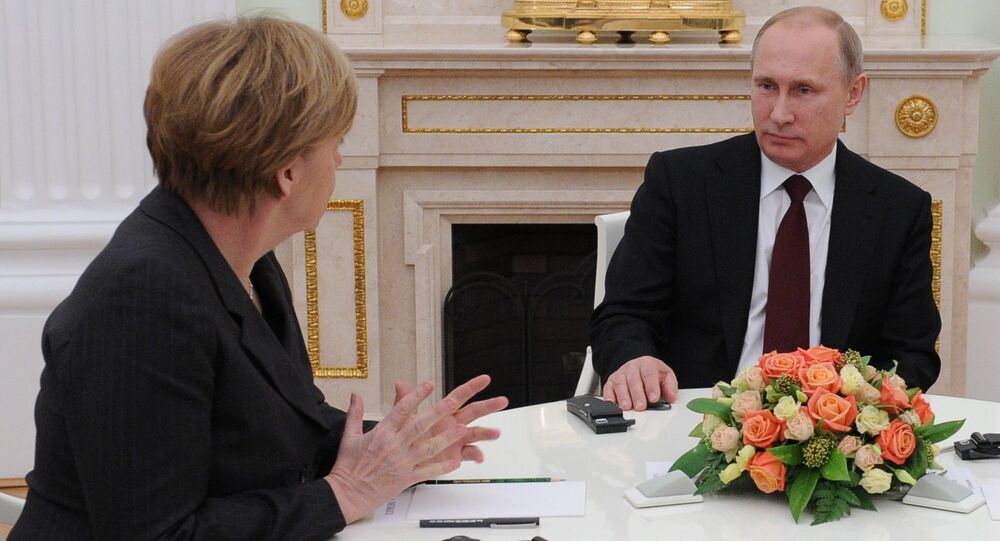 Will Media Accuse Putin of ‘Being Responsible for Merkel's Haircut' Next?

The West makes Russian President Vladimir Putin out to be responsible for all of the ills of the modern world, German magazine Spiegel Online wrote.

However, most accusations against Putin are made up and not based on any evidence. Whether you switch on your computer, read the newspaper or turn on the TV, the negative image of Russian President is everywhere, the magazine wrote.

"From the Ukrainian conflict and migration crisis to Pegida, the Russian President seems to be responsible for all the problems on the continent. Soon, probably for Merkel's haircut as well," the article said.

© AP Photo / Alik Keplicz
Putin: West Continues Cold War Approach Despite Bipolar System Collapse
When the Ukrainian conflict started, Putin was simply perceived by the West as a madman. At that time, Angela Merkel said that "he lives in his own world", but now, he is considered a real "devil."

According to the magazine, there is poor habit among Western countries to see everything in black and white.

"Europe is bright, reasonably controlled. And there's a dark Russia, prone to violence, tyranny, chaos, craving for our destruction," the article said, referring to the most common prejudices about Russia in Western countries.

In late September, Russia started a military campaign in Syria. Over the course of six months, the Russian operation fundamentally improved the situation in the country and achieved "irretrievable" success, as the German newspaper FAZ wrote on Sunday.

At the same time the West had watched in silence as 250,000 people died and more than 11,000,000 lost their homes over the course of the five-year civil war.

"Through the prism of indifference and incompetence of the calculation we watched how Syria was turning into a slaughter. We have lost the right to moralize," the magazine concluded.

Serious Mistake! West ‘Should Have Built Dialogue With Russia as Equals'