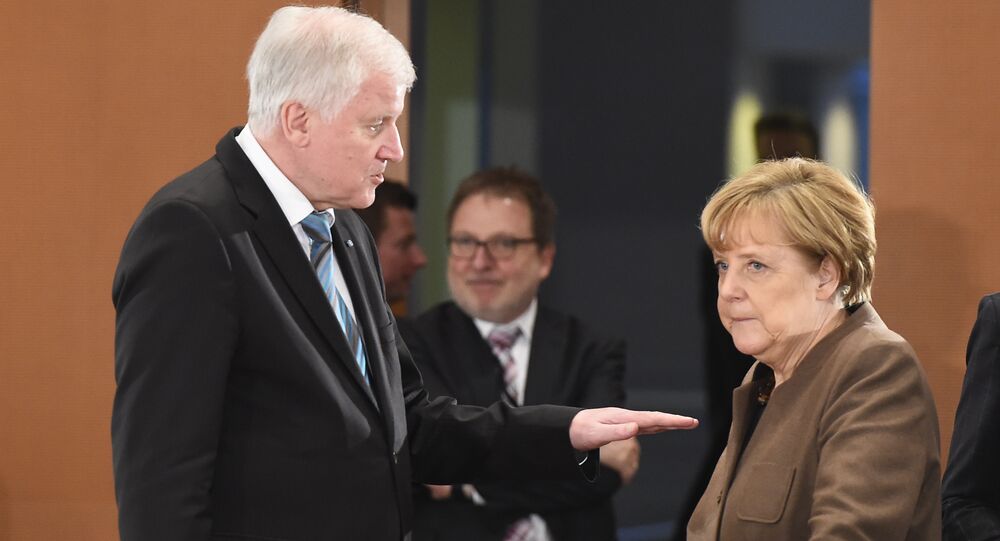 Amid heavy criticism over the government's handling of the refugee crisis, German Chancellor Angela Merkel has toughened her stance on new arrivals into the country, with her Christian Democratic Union (CDU) party outlining new guidelines for asylum seekers to follow if they want to stay in Germany.

As part of the plan labeled "Fördern und Fordern" (Encourage and Demand), outlined by Merkel's CDU, the senior partner of Germany's CDU/SPD grand coalition, refugees in Germany would have to abide by certain rules if they want to stay in the country.

The proposals suggest that anyone found to not be meeting the guidelines could be sent back to their home country, as part of tougher plans aimed at reducing the number of illegitimate refugee claims in Germany.

© AFP 2021 / Daniel Bockwoldt
Refugees are seen in their temporary housing in a former hardware store in Hamburg, northern Germany.

To help with the integration of new arrivals, the plans suggest that newly registered refugees will receive a starter pack in their native language explaining the laws and social norms in Germany — something that many critics have called for in the wake of the mass sexual assaults in Cologne, which reportedly involved refugees.

The integration plan would also offer basic German language classes with regular tests to check the proficiency and progress of those receiving lessons.

This would be backed up by measures allowing refugees to enroll in universities, while employment officers would assist others looking for jobs.

Despite the support, the CDU plans have offered a warning to those granted asylum and looking to stay in Germany.

"Integration comprises encouraging and demanding. It is an offer but also an obligation to personal endeavor," the proposals state.

The plan comes amid efforts from the German government to reduce the number of people entering the country.

With Merkel's open-door refugee policy increasingly unpopular with the German electorate, a tougher stance has been adopted by Berlin to ensure that only those in desperate need of protection are granted asylum.

The new proposals may run into some opposition however, with the Social Democrats (SPD), Germany's junior coalition partner, raising concerns over efforts aimed at modifying the minimum wage.

Under the new plans, companies could pay refugees less than the current minimum wage of US$9.5 (€8.50) an hour, as long as refugees were employed as part of an internship.

However, the SPD has warned against efforts that could compromise the minimum wage, arguing that it could lead to unnecessary competition that could drive down the wages of many Germans.

Germany Denies Plans to Cut Refugee Reception by Half