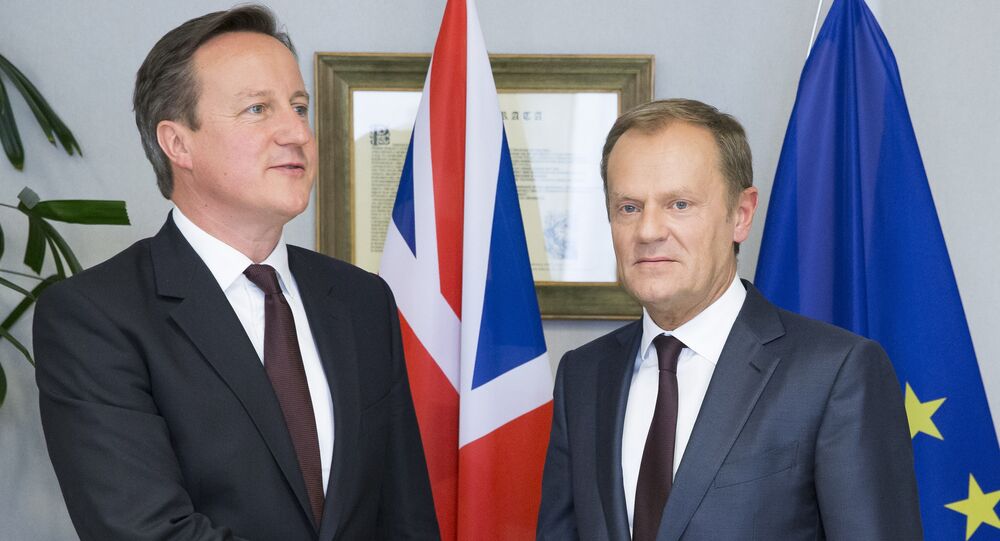 UK Prime Minister David Cameron is in Brussels Tuesday in last-minute talks to secure a new deal for Britain to remain in the European Union, while European Council Donald Tusk travels to Athens, Prague and Berlin to seek their backing for the proposals.

Both Cameron and Tusk are embarking on last-ditch talks to secure an agreement that will keep the UK within the European Union, subject to enough conditions to satisfy Cameron's Conservatives and other Euroskeptics that he has achieved a better deal for Britain.

Cameron was forced to promise an In-Out referendum on Britain's membership of the EU ahead of the 2015 general election. His Conservative Party has been split over Europe for decades. The party lost the 1997 election over deep divisions over the European project and was out of power for 13 years.

Cameron is hoping he can reach a deal that gives Britain an exception to the principle of "ever closer union", a guarantee that the country will not be discriminated against because of being outside the Eurozone, the power to over-rule Brussels — if enough member states agree — and cuts in red tape.

If Britain doesn't want to be part of further political integration of EU, let's respect & recognise this fact in the treaties #UKinEU

But his chief problem is on migration. At home, he is under threat because EU migrants working in the UK are enjoying in-work benefits — including housing assistance — that many British-born workers say is slewing the marketplace against local workers.

Cameron has proposed and "emergency brake" meaning that EU workers would have to wait four years before they could enjoy the same benefits. However, many in Eastern Europe — including Poland which has a significant Polish population working in Britain — say this is discriminatory and that the "emergency brake" will have to be subject to certain conditions.

Cameron has the backing of Tusk, who warned:

"This is a critical moment. It is high time we started listening to each other's arguments more than to our own. It is natural in negotiations that positions harden, as we get closer to crunch time."

This is a critical moment. Risk of break-up is real as #UKinEU negotiations very fragile. Handle with care. What is broken cannot be mended

However, Cameron knows that — whatever deal he gets this week in Brussels — he still has serious convincing to do within his own party which is barely able to disguise open conflict between the Europhiles and the Europhobes.

The EU referendum is a defining moment for Conservative MPs- we will be judged on this for Parliaments to come: https://t.co/DFyR5BLeDd

Arch euroskeptic lawmaker John Redwood sent an email round Conservative MPs saying: "The well intentioned efforts to give us a bit more freedom over the payment of benefits in certain circumstances is not proof against a European Court case reversing it".

"There is no half way house or middle way. The vote is simple. Stay or leave. If like me you want to be governed by a democracy, where government is of the people, by the people, for the people, there is only one option. UK democracy is incompatible with EU membership."

Which led to a thundering retort from the grandson of former British Prime Minister Winston Churchill, Nicholas Soames, who tweeted:

If such strong language is being used by Conservative Party big-hitters ahead of Cameron's deal, which he has not yet put to the country, it portends badly for him when he does, as in-fighting is likely to intensify.