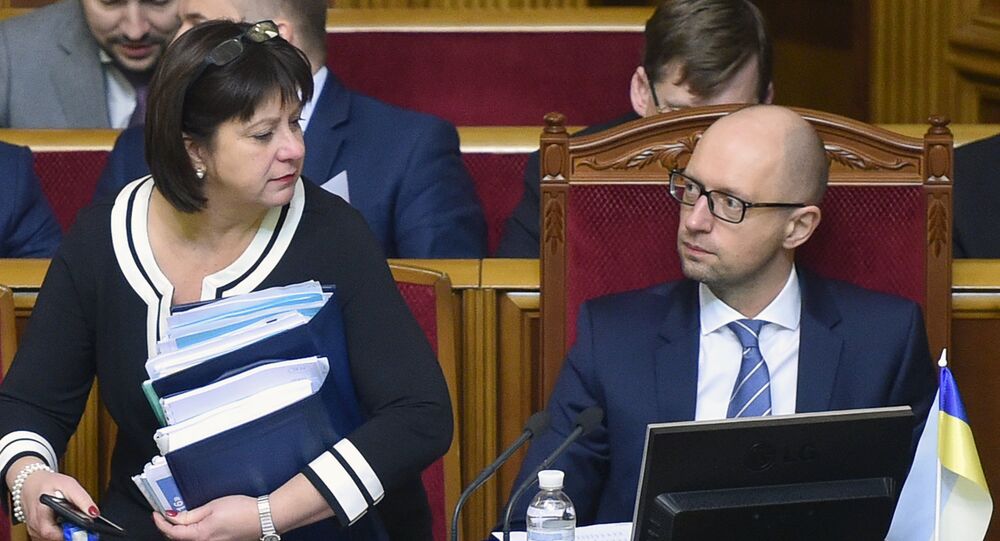 The Petro Poroshenko Bloc's faction in the Ukrainian parliament considers the work of the Ukrainian cabinet in the past year as 'unsatisfactory' and will support the vote to dissolve the government, a Ukrainian lawmaker said Monday.

KIEV (Sputnik) — Yatsenyuk said Friday that his government will continue to work despite the recent crisis, although the Cabinet is ready to resign should the parliament find it necessary.

"The Petro Poroshenko Bloc's faction has decided to consider the work of the government 'unsatisfactory.' We will vote for the Cabinet's resignation if there are enough votes in the Verkhovna Rada," Volodymyr Aryev said following a faction meeting attended by President Poroshenko and Prime Minister Arseniy Yatsenyuk.

© AP Photo / Sergei Chuzavkov
Resigned Ukraine Economy Minister May Consider Staying in Revamped Cabinet
The economic situation in Ukraine has been deteriorating since February 2014 when a new government came to power in what some consider a coup. The country's GDP fell by 6.8 percent in 2014, while inflation soared to 24.9 percent. According to IMF projections for 2015, Ukraine's GDP was expected to contract by 9-11 percent with inflation standing at 46 percent.

On February 3, Ukrainian Economic Development Minister Aivaras Abromavicius announced that he would resign from his post, because of important reforms were blocked systematically "at a political level" in Ukraine. The agrarian policy and food minister, the information policy minister, the healthcare minister and the infrastructure minister joined Abromavicius the next day, later rescinding their resignations.

Following Abromavicius's statement, Yatsenyuk said that his government will continue to work despite the recent crisis, although the Cabinet is ready to resign should the parliament find it necessary.