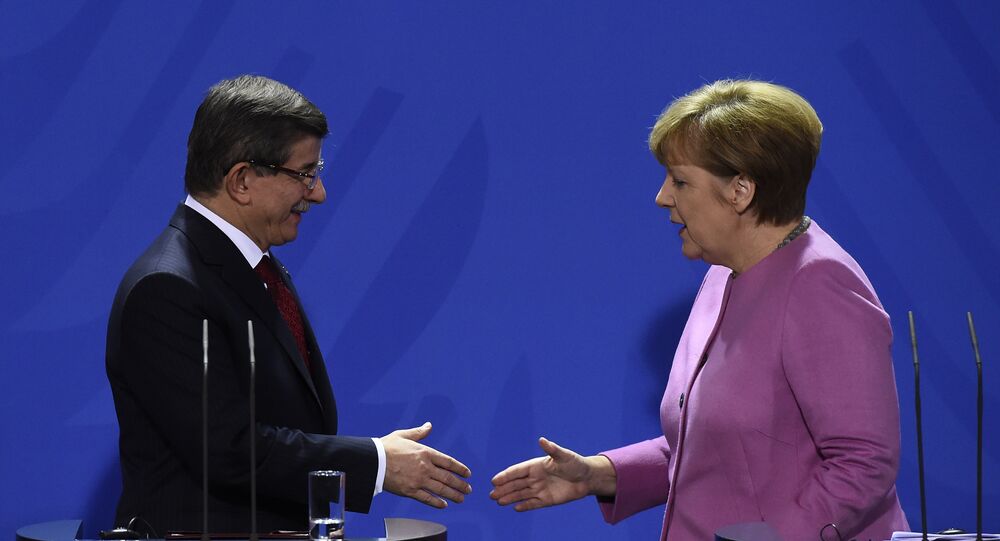 When it comes to dealing with Turkey and trying to solve the ongoing refugee crisis in Europe, German Chancellor Angela Merkel shouldn’t talk to Turkey on behalf of the entire European Union (EU), French political analyst Didier Billion told Atlantico.

By negotiating with Turkish President Recep Tayyip Erdogan the issue of refugees, Merkel is simply pushing her own interests, not the interests of the EU as a whole.

"There is no equality between German interests and European interests," Billion, who is the co-head of the French Institute for International and Strategic Affairs (IRIS), told Atlantico.

Since no EU counsellors have given Merkel a mandate to discuss the issue of refugees with Erdogan and Merkel's claims to represent the EU were made without a collective decision they're illegitimate, the French political analyst explained.

According to Billion, Merkel's selfish action shows a "sign that the European project no longer exists."

© REUTERS / Umit Bektas
From Turkey 'Empty-Handed': Merkel's Solution to Refugee Crisis Not Working
Meanwhile for Erdogan, the EU's disunity is beneficial, as he can negotiate a better deal for himself using the refugees as a diplomatic tool. Despite this, whether the EU likes it or not, Turkey will continue to play a central role in the refugee crisis, the Frenchman argued.

If the EU fails to find a working deal with Turkey, Europe will face an increasing wave of uncontrollable refugees. According to Billion, without an agreement with Turkey the number of refugees in Europe would increase manifold.

Nevertheless, an agreement with Turkey should be found with the participation of all 28 EU member states and not based on Merkel's personal interests, Billion said.

Merkel's personal attempt to act as the EU's representative has been "reckless" and she will end up paying a stiff price for this in the future. Many Europeans are unhappy with her policies and have already dubbed her sarcastically as "Mama Merkel," the IRIS expert said.

The German Chancellor has already provoked widespread public anger after calling on all EU member states to participate in a mandatory relocation scheme, according to which refugees would be relocated across the entire EU.