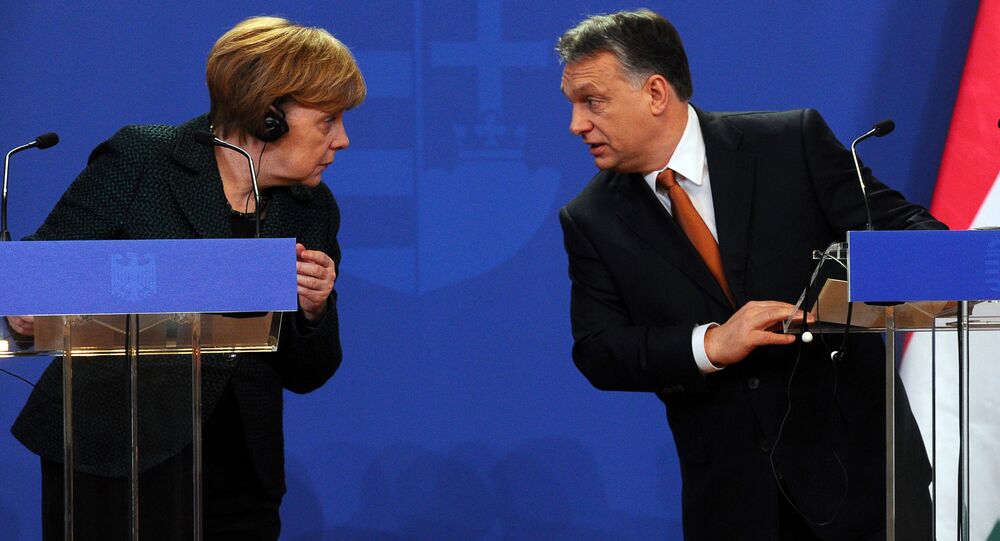 German Chancellor Angela Markel is looking increasingly sidelined over her handling of the refugee crisis as the core members of the Visegrad group - the Czech Republic, Hungary, Poland and Slovakia - threaten to split Europe over relocation and border controls.

© AP Photo / Christian Bruna
UN Steps In to Warn Central European States Over Refugee Row
Merkel has provoked anger after calling on all EU member states to participate in a mandatory relocation scheme whereby genuine refugees from warzones, or countries where people are likely to be persecuted against, are offered asylum throughout all the EU countries.

At Monday's meeting of the Visegrad group — alongside Bulgaria and Macedonia — the leaders of the central European states are outlining their determination to avoid a compulsory relocation scheme and threaten to close their borders completely to stem the flow of migrants and refugees flooding into Europe.

Merkel is desperate not to oversee the collapse of the Schengen borderless Europe zone, but will have her work cut out at this week's EU leaders' summit. The Visegrad group is calling for a 'Plan B', closing the border with Greece and Macedonia.

Hungary has already built a 175km razor wire fenced along its border with Serbia and another 40km fence at its border with Croatia. Bulgaria built a fence blocking migrants from Turkey and other border controls are in place between Turkey and Greece, Macedonia and Greece, Austria and Hungary, as well as Slovenia and Austria.

© AP Photo / Petr David Josek
Hungarian soldiers work on a fence that is being built at the border with Croatia, near the village of Beremend, Hungary, Tuesday, Sept. 22, 2015

EU leaders are set to discuss the possibility of suspending the Schengen zone for up to two years — a course of action Merkel is keen to avoid. However, with the central European countries actively planning a complete border shutdown to prevent migrants from crossing into Europe via Turkey and Greece, she is heading for a conflict. Hungary's Prime Minister Viktor Orban said:

"We need a new second line of defense."

"As long as a coherent European strategy is lacking, it is legitimate for the countries along the Balkan route to protect their borders… We will help them with that."

Merkel's plan to negotiate a relocation program with Turkey for refugees to be distributed around Europe is also heading for trouble. Poland's new prime minister Beata Szydlo made ​​clear last week that this would only encourage more refugees to attempt the hazardous route to Europe.

The Czech Interior Minister Milan Chovanec threatened not to pay his country's share of the US$3.36 billion grant to Turkey so it can secure its borders and stem the flow of migrants reaching Europe.

Why do people obsess over how many refugees Hungary or Poland are willing to admit and not Mozambique, Indonesia, or Saudi Arabia?

However, the President of Turkey Recep Erdogan has said the EU money is insufficient for it to tackle to huge number of people crossing from Syria and aiming for Europe. He threatened last week to "open the floodgates" and allow migrants through-passage into Europe.

With such fighting talk among the Central European nations, Merkel is heading for a very shaky summit on February 18 and 19.

She has promised to cut the number of refugees accepted by Germany in 2016, but wants to do so by not closing borders and relying on a "coalition of the willing" to rally round a common immigration policy within Europe.

With the EU split over borders and refugees, she is unlikely to get her way.