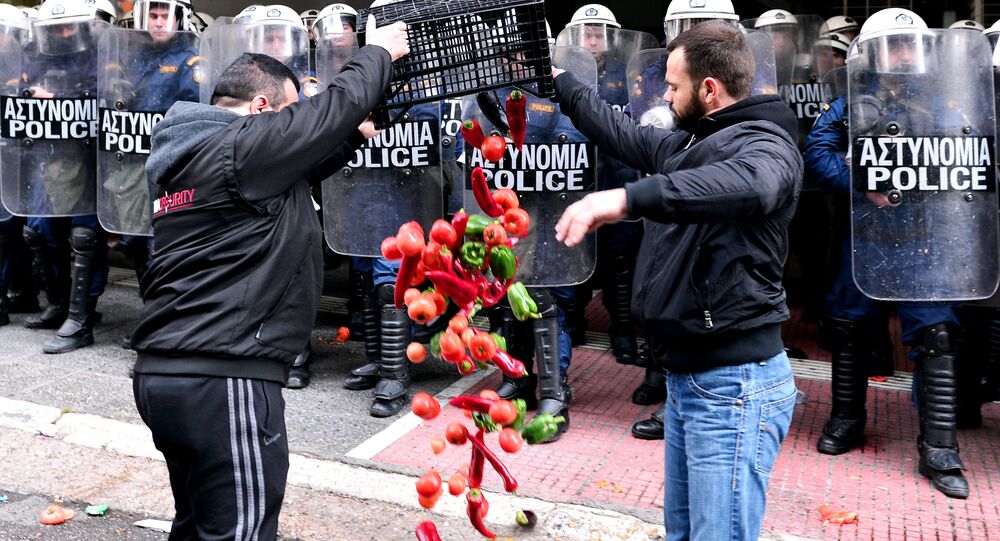 Greek farmers have clashed with police in downtown Athens, following weeks of motorway blockades to protest against the government's tax rise and pension reform plans.

Around 800 farmers from the Greek Island of Crete tried to enter the Ministry of Agriculture this morning, but when riot police halted them a confrontation erupted.

The protesters were seen throwing rocks and tomatoes, setting rubbish bins on fire, and brandishing sticks as the police fired tear gas. Some of the rioting farmers were later arrested.

"These scenes were aimed at blackening the struggle of the farmers," Agriculture Minister Vangelis Apostolou, who was barricaded inside the besieged building, told AP.

"For us, there is one path — that of dialogue to solve the problems of farmers."

Other brawls were initiated on the highways around the capital, as thousands of farmers were trying to enter the city with tractors and agricultural vehicles, which are banned in the city.

Some farmers managed to get around police roadblocks, and effectively using their tractors for about half an hour created a blockade on the motorway linking Athens to its airport.

The planned two-day Athens demonstration follows weeks of highway blockades all around the country — which have caused diversions and delays, and disgruntled truck drivers from neighboring countries.

Only in #Greece: Protesting Greek farmers chase a group of riot police in downtown Athens. (via @NewsItFeed) pic.twitter.com/PVMTkbNZeJ

Farming organizations have so far refused to talk with government officials, simply asking that the proposed reforms be repealed.

Prime minister Alexis Tsipras' cabinet has unveiled new plans to radically reduce the country's expenses by US$2,02 billion (€1.8bn), and start repaying its most recent bailout to creditor countries.

Farmers offering products for free after they placed their tents on #Syntagma for a 3day protest #agrotes #Greece pic.twitter.com/YcCkkAX03r

Farmers, specifically, will face the slashing of over three quarters of their yearly earnings as a result of a doubled income tax, and the four-fold increase of social security contributions.

The reforms would also lower the maximum pension by US$450 to US$2,586, and lower the minimum guaranteed pension to US$432. This further shrinkage comes after the average pensioner income has been reduced by 12 times at the hands of the EU and the IMF.

Still, Greece's creditors claim that the Greek pension system is the most expensive in Europe and it is to blame for much of the country's economic dysfunctionality.

Farmers from Crete protesting outside the ministry of Agriculture #agrotes #Greece pic.twitter.com/7c8JgFqLBV

The reforms are slated for a parliamentary vote four weeks after Greece and its creditors reach an agreement on the measures' definitive make-up.

While the tractors' blockade is the most visible manifestation of Greeks' discontent — from farmers to pensioners and lawyers, to doctors and sailors — the proposed reforms have managed to bring together a motley bunch under the same protest umbrella.

#Athens Farmers from across Greece protest against the puppet gov. and its plans for new austerity measures #agrotes pic.twitter.com/bFxaOe3Rer

This afternoon, protesters will start an overnight sit-in in front of the Parliament, in Athens' Syntagma, with a final rally scheduled for tomorrow.

Greek Exporters May Lose Over $34Mln Daily Due to Farmers' Blockades