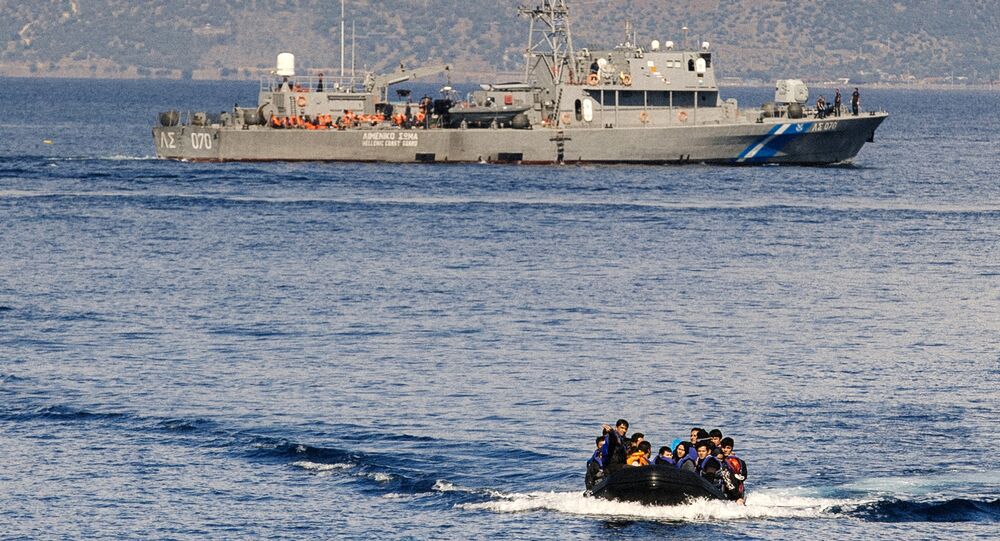 The recent remarks of the German chancellor and her Turkish counterpart about their plans to use NATO to bolster Turkey’s coastal borders have apparently taken the Alliance by surprise, which reacted by denying the claim, declaring “it isn’t really NATO's job,” according to US-based online magazine Politico.

© AP Photo /
It's a Trap! Erdogan Trying to Use Refugee Crisis to Lure NATO Into Mideast
“Turkey and Germany will together recommend to NATO … becoming involved concerning the consequences of the flow of refugees from Syria,” Davutoglu told a joint news conference with Merkel. “In particular, we will make a joint effort on the effective use of NATO’s observation and monitoring mechanisms on the border and in the Aegean.”

The German-Turkish proposal has apparently caught the Alliance on the back foot, says the outlet.

It cites as an example a remark made by an anonymous official at its headquarters in Brussels:

“We wonder what the outline is, and why NATO?” he apparently asked. “It isn’t really NATO’s job.”

© AP Photo / Tolga Bozoglu, Pool
EU ‘Should Ask Russia for Help Instead of Falling on Its Knees in Front of Ankara'
“NATO doesn’t have any legal mandate nor framework to manage this type of situation,” it also quotes another unidentified source at NATO as saying, “where the feeling was that the request was so far vague and unprepared.”

The voiced proposal came ahead of a meeting of NATO defense ministers on Wednesday and Thursday.

“I expect that the Turkish minister will provide us with more details when we meet tomorrow and that the ministers will address this issue,” NATO Secretary General Jens Stoltenberg said ahead of the meeting. “I think we will take very seriously a request from Turkey and all our allies to look at what NATO can do to cope and deal with the crisis and all the challenges they face, or at least in Turkey.”

The US ambassador to NATO, Douglas Lute, was also not very welcoming of the idea, noting that that responding to the refugee crisis is primarily the EU’s job, rather than Washington or NATO’s.

No Time for Crime? German Police Too Busy Dealing With Refugees