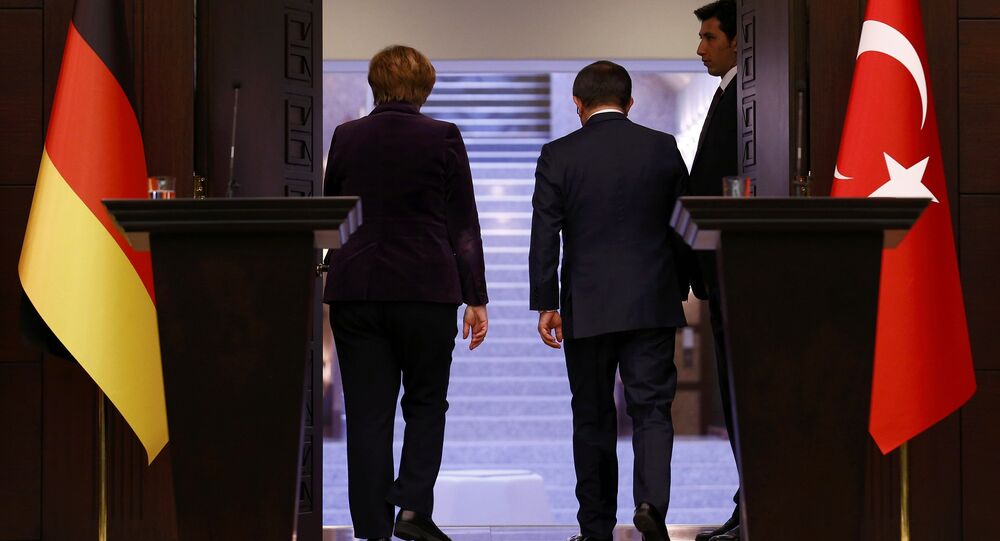 From Turkey 'Empty-Handed': Merkel's Solution to Refugee Crisis Not Working

Angela Merkel's latest visit to Turkey was meant to encourage Ankara to deliver on its promise and prevent refugees from flooding into Europe, but it appears to be a classic case of a mountain bringing forth a mouse.

At a first glance, the visit might have seemed productive. The German chancellor and Prime Minister Ahmet Davutoglu have agreed on a 10-point action plan in addition to the existing $3.35 billion deal.

© REUTERS / Hannibal Hanschke
Refugee Crisis: 'Merkel Has Lost Contact With Reality'
One of the steps, outlined in the strategy, involves urging NATO to help monitor Turkish coastal borders, which are the primary route migrants use to get to the EU. Other measures include greater humanitarian cooperation between the two countries. Ankara also pledged to do more to curb human trafficking.

However, these steps, according to Matthew Karnitschnig and Janosch Delcker, "fall short of the firm commitments Berlin has been hoping for." In their view, Merkel came home "empty-handed" since the German chancellor "has almost no leverage" when it comes to bargaining with Ankara.

© AFP 2021 / Bulent Kilic
Migrant families - helped by rescuers - disembark on the Greek island of Lesbos after crossing with other migrants and refugees the Aegean Sea from Turkey, on November 25, 2015.

"Instead, she found herself confronted with fresh complications and new demands from Ankara" as increasing waves of refugees flee violence in neighboring Syria, they wrote for Politico. Under these circumstances "Ankara will have even less incentive to accommodate Europe by taking measures to keep the refugees from leaving."

Merkel is facing increased pressure at home to introduce a cap on the number of refugees after Germany accepted 1.1 million asylum seekers in 2015 – a record for any European country. According to a recent survey conducted by ARD Deutschlandtrend, over 80 percent of respondents think that Merkel's government is not in control when it comes to dealing with the refugee crisis.