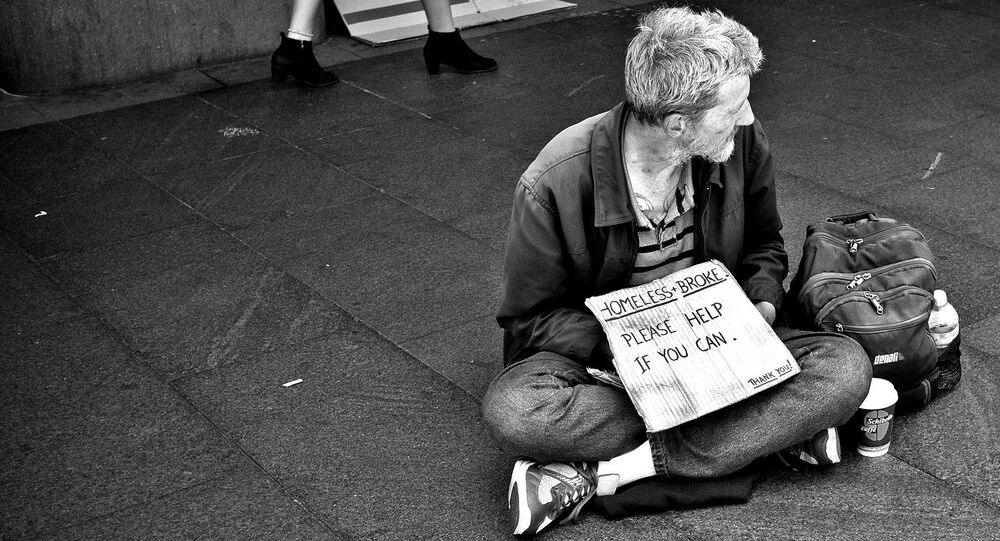 More than 60 people in Brighton have been arrested for begging in the last year, rousing accusations that the Sussex police force is criminalizing rough sleepers by using plain clothed police officers to arrest them.

A statement from the force said: "We use plain clothes officers to gather evidence against people begging as they are not likely to ask a uniformed officer for money.

"If we know someone who has been begging is now engaging with the various programs and agencies, then we will look for alternative ways to address the anti-social behavior", adding that "it is unlikely that they will be arrested. However, if we see someone begging who has refused help from the agencies, then they can be arrested."

It is illegal in England and Wales to be homeless under the Vagrancy Act 1824, which means anyone begging or clearly sleeping rough can be arrested, but "more often told to move on," a police officer who remains anonymous told Sputnik.

"It is illegal to beg and you can be moved on if you're blocking the pavement — that would be a crime. These are all the ways the government control public spaces. Most police officers in boroughs in London like Westminster, where homelessness is a major problem, are more likely to just ignore them," an anonymous police officer told Sputnik.

Critics of the strategy to arrest people who are illegally begging in Brighton argue that it increases the financial burden on rough sleepers with addiction problems.

But according to the police officer, who agreed to speak to Sputnik:

"Most beggars are already housed and use the money to top up methadone or to buy heroin."

Jason Knight, a businessman in Brighton who works with homeless people in the city, told London newspaper the Independent that: "People are effectively being victimized for sleeping rough. We have a ridiculous situation where homeless people are being arrested for asking for a few pennies, fined by the courts and then put back out on the street. These are vulnerable individuals who are being criminalized."

According to homeless charity, Crisis, rough sleeping in on the rise. Since 2010, there has been a 55 percent increase in the numbers of people sleeping rough across England. In 2014, the British government estimated around 2,744 people sleep on the streets on any one night. However, Crisis believes that number to be much higher.

If you're homeless, law says you can be turned away to sleep rough. Demand #NoOneTurnedAway https://t.co/DLYOEw1TkQ pic.twitter.com/CTVg0Oyo5e

Over seven thousand people slept rough at some point in London alone during 2014 and 2015 — a 16 per cent rise on the previous year.

Homeless people in the UK, particularly street children, should be regarded as potential assets, and not as a nuisance or burden on society.

The police officer, who agreed to speak to Sputnik, joins outreach teams paid for by local councils to work with homeless people on the streets of London.

"You approach them in a manner that they are a vulnerable person with complex needs. You treat them like people — you never know who you might find.

"We took one man up to the No Second Night Out shelter recently. He was Polish and had been working sporadically. He had a child back in Poland and was waiting for more work before he returned to Poland to pay his child's medical bill, so with our help he had a nice warm night and was able to get into a hostel.

"But you always get people who don't want any help. It can be for so many reasons, they could be ashamed or embarrassed, or they would rather sit and get drunk or high, so they don't have to address their illnesses," a police officer told Sputnik.

No Second Night Out has hubs in north, south, east and west London, providing heated indoor areas for people to bed down with food, tea and coffee, as well as support networks for mental and physical health.

Offering further insight into the situation in London, the officer said:

"They do cause a visible nuisance — they urinate and defecate in public spaces and they leave their stinky sleepy bags on the streets. There is a stench about them. But there are homeless people who do manage to keep themselves clean because there are loads of facilities in London.

"No homeless person needs to be on the streets because there are plenty of council, church and charity facilities working to help homeless people — but if someone sleeping rough refuses any of the services available — they can be arrested."

Police forces are facing further budget cuts over the next four years, which begs the question — how will they be able to deploy their depleted resources — plain clothed or in uniform.

Forces are already operating with 17,000 fewer officers than they had five years ago. Budgets have been slashed by 25 percent since Theresa May became Home Secretary in 2010.

Crushed to Death, in a Bin: Hidden Misery of Europe's Migrants Exposed