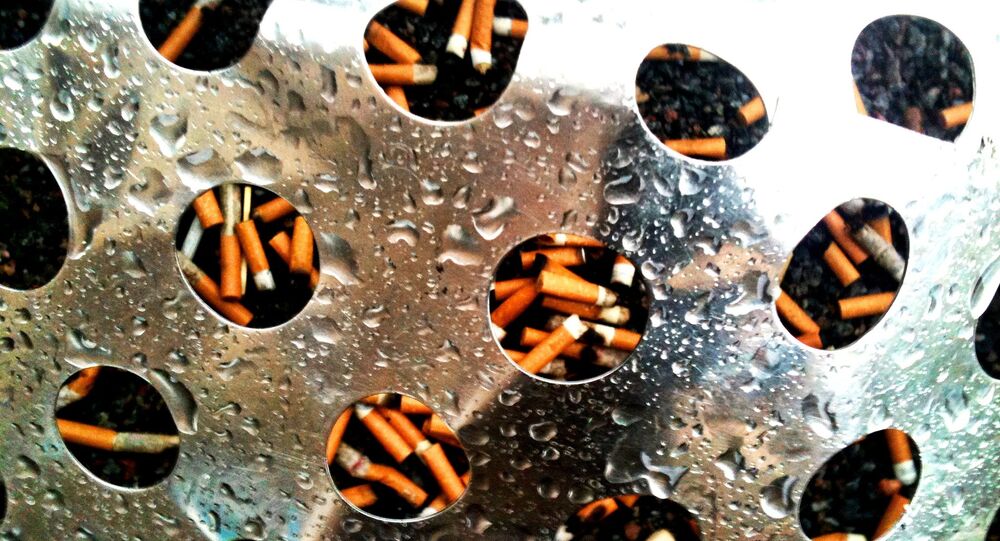 One of the world's leading international tobacco companies has called out Greece for its illegal cigarette trade, accusing it of denying the state thousands of euros in potential revenue. Meanwhile, a leading academic in public health tells Sputnik the tobacco industry has been found to benefit from the illicit trade.

"The tobacco industry has been found to benefit from the illicit trade."

"Young people, who are the ones the industry is interested in, like being able to buy cheap cigarettes and if they're cheap enough, they get the habit and they keep it and remain in the market for tobacco."

"So, it's greatly beneficial for the tobacco companies in the long term, if thousands of young people take up smoking," Dr Filippidis told Sputnik.

"It creates a big public revenue hole that taxpayers have to fill," Kargarotos said.

More people smoke in Greece than in any other European country, Dr Filippos Filippidis, told Sputnik, suggesting that the Greek government is "lacking the political will to do something about cutting the number of people who smoke or raise tax on tobacco". He thinks this failure of the Greek government is "either down to total incompetence — or another interest".

A recent report found that 3.9 billion illegal cigarettes were smoked in 2013 — four times as much in 2009, which estimated that it denied the public purse approximately US$626 million (€565m).

"Even though there has been a reduction in the number of people who smoke in the last five years — it's still the highest in the European Union. The former Greek prime minister once met with Philip Morris and praised their investment," exclaimed Dr Filippidis.

"The current government has planned to enforce the tobacco control legislation but it hasn't really happened," he added.

Dr Filippidis told Sputnik that it doesn't appear to be a priority for the government to set up a sensible mechanism to control the tobacco trade in general.

"Whether that's the illicit trade, enforcing smoke free zones, increasing taxes and prices", he said, "so they do lose a lot of money and it's crazy."

Dr Filippidis recently wrote a letter published in The Lancet, a medical journal, suggesting that a tax increase of US$2.2 (€2) per pack of cigarettes would raise US$1.34 billion (€1.2bn) in new revenue — and prevent 125,000 Greek children from taking up smoking and prevent 190,000 deaths. Dr Filippidis states in the letter that ten percent of Greece's national budget is spent on the treatment of smoking related diseases.

"Any sensible person who becomes a health minister or a finance minister in Greece, which has the highest proportion of smokers in any EU country, would increase tax on tobacco, save the health system and save lives. It makes sense from a financial and health point of view."

A recent opinion poll also showed that 73 percent of Greeks support a tax increase on tobacco — if the money is spent on health and curbing smoking.

"At the end of the day, illegal traders make a lot of money — people like cheap cigarettes, and the tobacco industry gets the addicts. No one has a real interest in doing something about it — apart from the people."

Dr Filippidis is calling on the Greek government to make tobacco control a priority.

"I cannot prove that the health minister received money from the tobacco industry to prevent legislation being implemented — but the fact that is hasn't been enforced doesn't make sense," said Dr Filippidis, who remains suspicious.

The suggestion by Iakovos Kargarotos, vice-president of Philip Morris International's affiliate in Greece, Papastratos AVES,  that the lost tax revenue — if collected — could be used to pay for pensions and social benefits comes as thousands of workers, farmers, professionals and pensioners staged their third national strike.

The strikes are in protest over the proposed reforms to Greece's pension system. Prime Minister Alexis Tsipras' Syriza government needs to save US$ 2 billion (€1.8bn) under terms of its international bailout package.

Meanwhile, a tax increase of US$ 2.2 (€2) per pack of cigarettes would raise US$ 1.34 billion (€1.2bn) in new revenue, according to Dr Filippidis and his colleagues.