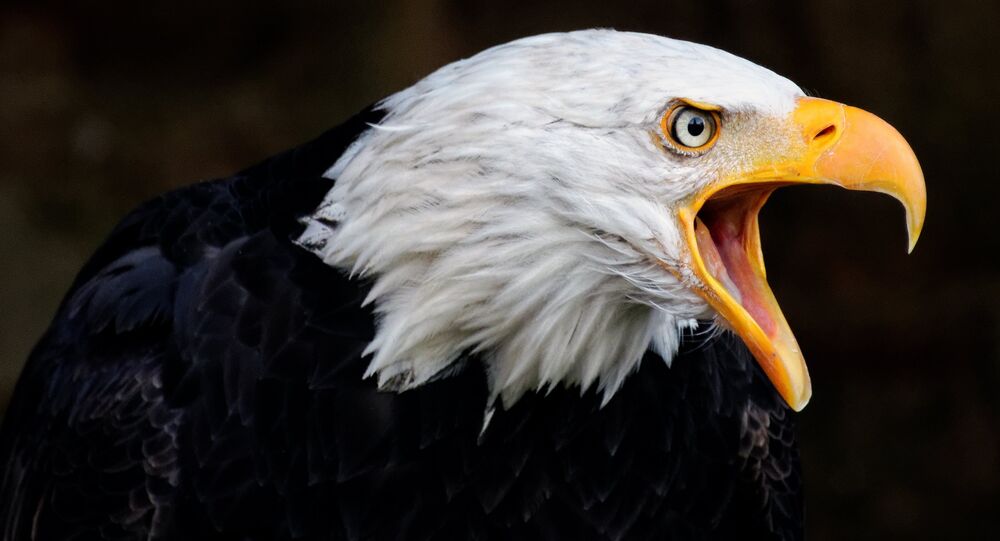 The consideration by London's Metropolitan Police to use eagles to take down drones is "totally unsuitable" and "extremely dangerous" - Britain's leading falconry expert told Sputnik.

"You certainly shouldn't let eagles catch something that is dangerous enough to chop off a human finger," said Jemima Parry-Jones, director of the International Center for Birds of Prey.

"It's not safe for the bird to grab hold of whirling blades.

"Birds of prey should not be flown in built-up areas — what if it landed on a building, or a pram with a child inside, or goes and chases a dog?" Parry-Jones asks.

Please sign this petition, we feel very strongly that eagles should not be trained to catch drones, let's stop it before…

Posted by ICBP International Centre for Birds of Prey on Monday, February 8, 2016

The outrage from falconry experts follows the emergence of an online video which shows a giant eagle, trained by the Dutch Police, which streaks across the sky and captures a drone.

Police teamed up with a training company, Guard from Above, to successfully teach bald eagles to take down the flying objects.

"That video shows a young imprinted [hand-reared] eagle that could have been potentially dangerous," Parry-Jones told Sputnik.

"It grabbed the drone then covered it with its wings which is an extremely dangerous situation."

The flying robots are increasingly causing concern for police and aviation authorities. In 2015, there were 30 confirmed drone sightings on UK flight paths. Drones are also used by criminals to deliver illegal drugs and weapons over prison walls.

"I think it's a gimmick because loads of people in Holland own birds of prey and they're just thinking ‘how can I make some money out of this?' " Parry Jones suggests.

"The Met [Metropolitan Police] are jumping on it as it's good publicity but it has not been thought out. I'm disappointed the Met asked experts and took no notice."

A Met Police spokesman said: "As would be expected in an organization that is transforming, we take an interest in all innovative new ideas and will of course be looking at the work of the Dutch police use of eagles."

Not only does Britain's leading bird of prey expert think that it is "extremely dangerous" and "totally unsuitable" for eagles to capture drones, Jemima Parry-Jones told Sputnik that: "Anyone who knows anything about flying a drone would be able to avoid an eagle by going above it and swinging around behind it," which suggests that it wouldn't work anyway.

Dr David Glynne Fox, of the British Falconers Club Eagle Group, has also watched the footage and told Sputnik he is "totally amazed that anyone could be so stupid as to even think of the idea," and says the latest "gimmick" is "beyond the pale."

"If this ever takes off, heaven forbid, how long will it be before some bright spark enlarges the rotor blades deliberately, which they will, and then we'll see sectioned parts of raptors raining down over our housing estates. There is seemingly no end to so-called civilized mans' stupidity," Dr Fox told Sputnik.

Dr Fox, who condemns training eagles for capturing drones in the strongest terms — also had a message for those who do think it is a good idea:

"May I recommend that they thrust their own fingers into the revolving propellers and view the result! I am not being silly here either, because over the years, I have been staggered and yes, thoroughly disappointed at so-called falconers and their ridiculous antics," Dr Fox told Sputnik.

Eagle Takes Down Drone in Midflight