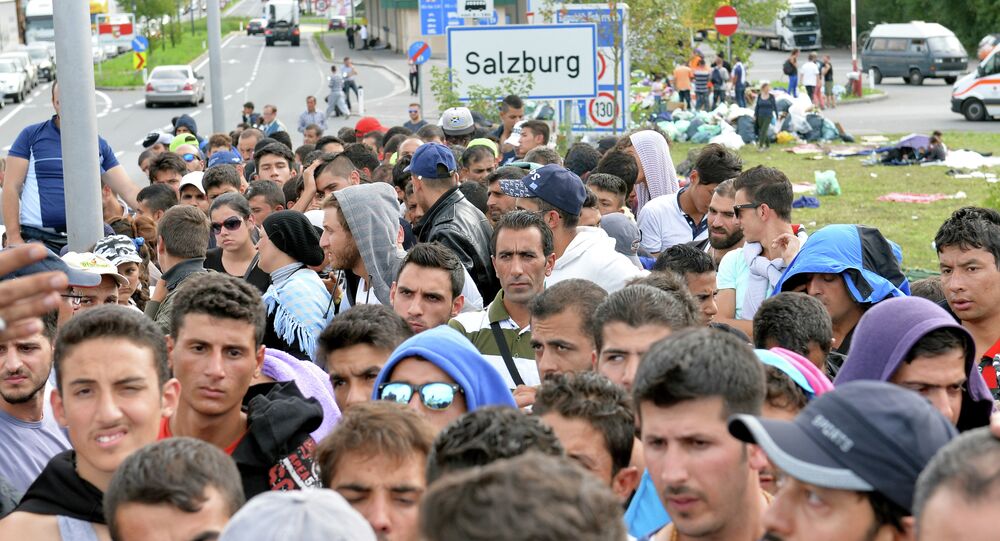 Austria has called on it's EU partners to close down the Balkan route, which is used by refugees to get to Western Europe.

© AFP 2021 / JOE KLAMAR
Refugees Country of Origin Unimportant Factor in Granting Asylum in Austria
Austrian authorities also suggested that soldiers from EU states should ensure the security of the EU's external borders, while refugees attempting to cross the border should be sent back to Turkey, German newspaper Deutsche Wirtschafts Nachrichten (DWN) wrote.

According to the newspaper, Austria is considering the possibility of a military mission in the Balkans. The country is campaigning for its EU partners to stop refugees on the Balkan route and use soldiers in case of emergency.

EU foreign ministers are meeting on Saturday in Amsterdam with representatives of such countries as Macedonia, Serbia and Turkey to discuss the issue.

"In Macedonia, but also in other states along the route we have now a strong willingness to reduce, slow or maybe even stop the influx of refugees," Austrian Foreign Minister Sebastian Kurz said at a ministerial meeting.

His country is willing to deploy military-police missions in cooperation with its partners in the Balkans, while EU soldiers could take care of border security and registration process of refugees in Macedonia and Serbia, the diplomat argued.

© REUTERS / Ognen Teofilovski
Germany, Austria Planning to Close Greek-Macedonian Border to Refugees
Kurz also has not ruled out the use of EU soldiers to ensure the border security in the region, while Austrian Defense Minister Hans Peter Doskozil spoke of possible "military-civilian joint missions".

Addressing numerous critics, the Austrian Foreign Minister called for an understanding regarding the Austrian policy. As a human being, he is "100 percent" sympathizing with refugees, but as a politician he has the responsibility to act and prevent the situation in which his country won't able to cope with the migration crisis, the diplomat claimed.

Europe is currently struggling to cope with a massive refugee influx, with millions of refugees fleeing conflict-torn countries of the Middle East and North Africa in search of asylum in stable and wealthy EU states.

Refugees from the Middle East and North Africa are transiting to prosperous EU countries, including Germany and Sweden, via various routes including Italy, Greece, Turkey and the Balkan states.