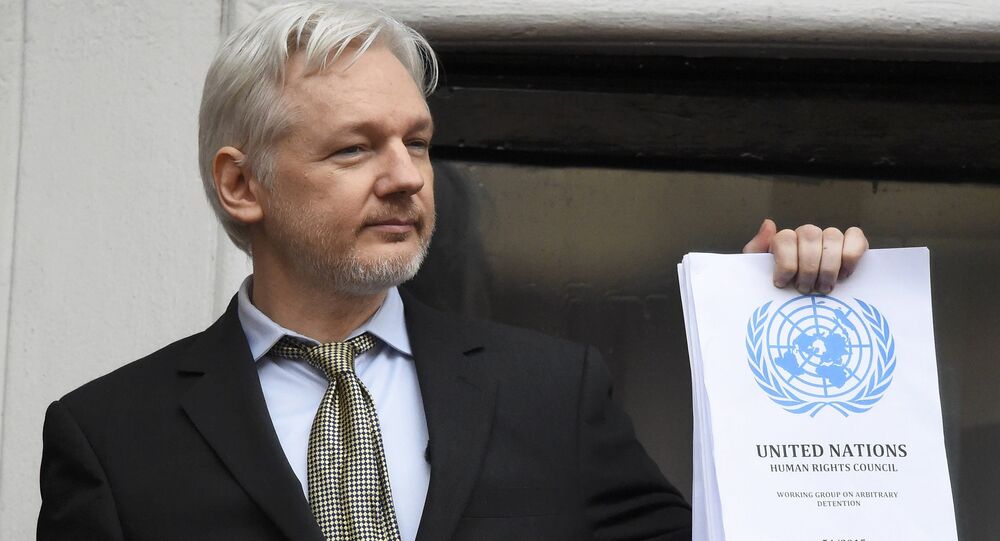 Roland Adjovi, Vice-Chair of the UN Working Group which made the conclusion that Assange was detained arbitrarily explained to Sputnik the reasoning of the group, as well as some possible consequences of its decision.

Julian Assange's status was ruled as arbitrary detention in violation of international law because it was ruled part of his previous jailing and house arrest, Roland Adjovi, Vice-Chair of the UN Working Group on Arbitrary Detention, told Radio Sputnik.

© REUTERS / Olivia Harris/Files
Assange to Crowd Outside Embassy: 'I'm Tough, I'm Hardened by This Process and I Can Take It'
Looking at the conditions of Assange's detention, the working group looked at his treatment in all three stages, and why the detention went on for so long.

"The group had two elements. First, for the ten days he was in the British prison, he was in isolation against international standards. Then the working group considered these five years of investigation, without any formal charge, without any indictment being issued against Julian Assange was a violation of due process," Adjovi added.

Based on those two parts of the judgement, the conditions and the due process, the UN working group judged the detention to be arbitrary and in violation of international treaties on human rights, which the UK and Sweden signed on to.

Adjovi said that he could not comment on UK Prime Minister David Cameron's statement that Assange would be arrested if he tries to leave. He instead pointed to a dispute resolution process for the issue.

He added that the political dimension of Assange's detention was not considered by the working group while carrying out its judgment.