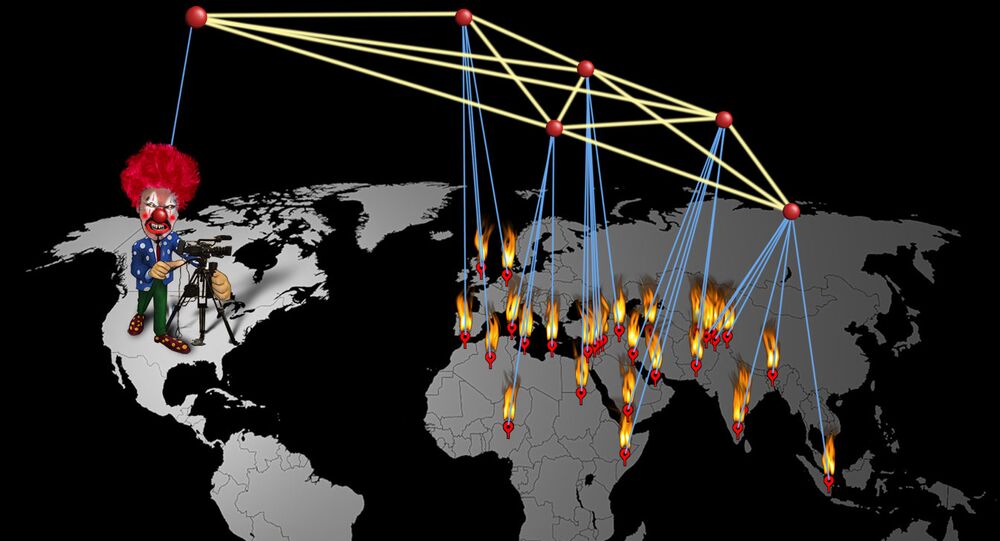 US European Command (USEUCOM) has recently unveiled its updated security strategy document 'Theater Strategy', where it labelled “revanchist Russia” as its top priority threat; however a UK-based journalist and blogger thinks that the document would actually make more sense, if you swap the words Russia with US.

© AFP 2021 / TARIK TINAZAY
Obstinacy Worthy of a Better Cause: US Keeps Labelling Russia as Its Enemy
“The 12 page document by General Philip M. Breedlove, USAF Commander, has a distinct early 1950s feel about it. That’s not surprising, because the present propaganda war against Russia is as strong — and unrelenting — as in the McCarthyite era,” Neil Clark writes in his blog for the RT English-language website.

In an ironic assessment of the document, the author suggests that it could be well put “in line for all the top literary prizes in 2016, as a work of fiction.”

“For in reality, the “most profound negative change in the European security environment since the end of the Cold War” has been the neocon-inspired Drang nach Osten. It’s Washington — and its aggressive policies — that’s made Europe and indeed the world in general less secure, not Moscow,” he states.

He cites as evidence NATO's expansion to the East, willfully disregarding earlier promises not to, and the disintegration of the Warsaw Pact.
“Money spent on weapons could be spent on more worthwhile things such as hospitals, schools and public libraries,” he says.

© Flickr / U.S. Army Europe Images
Pentagon's European Spending Spree: The Real Deal or Just Blowing Smoke?
Countries that didn’t wish to join the NATO club, he adds, were targeted with sanctions (Belarus) — or sanctions and bombing (Yugoslavia).
“In 1999, NATO — established as a defensive military alliance in 1949 — not only broke international law when it attacked the Federal Republic of Yugoslavia, but also contravened Article One of its own constitution.”

Russia was fine when it was acquiescing in all of this, but as soon as it began to stand up for itself and try and defend its own legitimate interests, the Cold War restarted, the author states referring to conflict in Ukraine and the 2008 conflict with Georgia, orchestrated by the West.

Clarke notes that all the above clearly contradicts the claims of the newly updated strategy that “Russia is the cause of much concern due to its increasingly aggressive behavior in Eastern Europe and militarization in the Arctic.”

He writes that the double standards over ‘national interests’ which the updated Theater Strategy highlights are quite remarkable.

It seems that while the US can claim that a European continent that is thousands of miles away from the US is its “key terrain” and essential to defending its “national interests”- Russia has absolutely no right to respond when the US carries out regime change on its own doorstep.