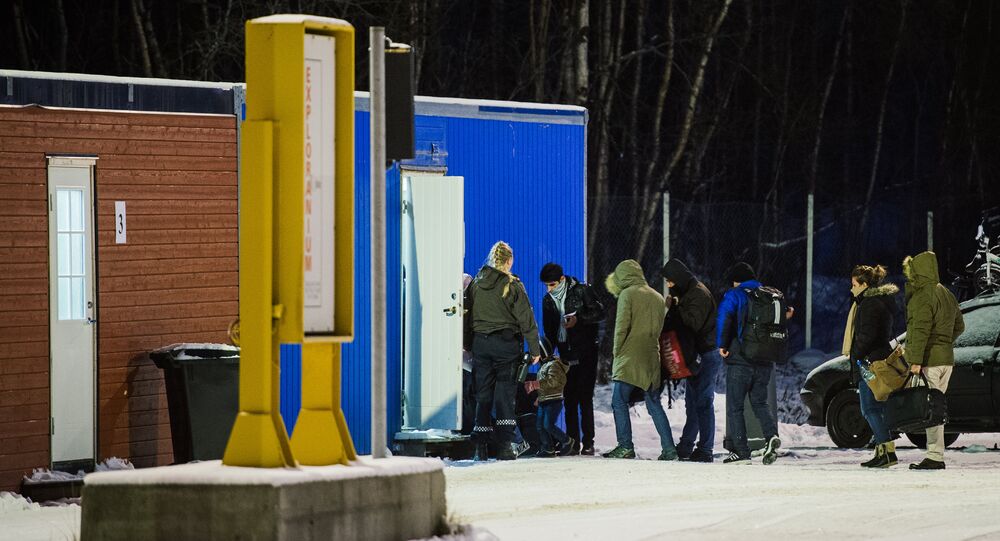 Russia and Norway have agreed that at least 200 failed asylum seekers from the Middle East and North Africa who had crossed the Russian border with Norway north of the Arctic Circle will be flown to Moscow.

© AFP 2020 / Jonathan Nackstrand
Moscow May Re-Admit Refugees From Norway Who Have Legal Status in Russia
Russia has agreed to receive at least 200 to 300 failed asylum seekers from Norway. The rejected refugees entered Norway at the Storskog border crossing but were then refused the right to remain in the country, the Norwegian Ministry of Justice told Norway's NRK newspaper on Wednesday.

On January 22 the Russian authorities had stopped taking back failed asylum seekers from Norway via the Storskog border crossing for security reasons.

On January 26, Russian Foreign Minister Sergey Lavrov told a press conference that Russia refuses to receive those individuals who gained a Russian visa under false pretenses in order to migrate to Norway.

"These are people who traveled to Russia with the stated aim of working or visiting relatives; it was not stated that their aim was to travel to Norway. These people made false claims about the purpose of their visit to Russia. We don't want to take those people back, they broke our laws, and we have agreed with the Norwegian authorities to take pause and work on a procedure that will allow us to resolve this problem in the interests of Russia and Norway."

"We have an agreement about readmission between Russia and Norway and our Federal Migration Service is discussing the possibility of making a speedy addition to that agreement with our Norwegian colleagues which solves the practical problems that arise from such unscrupulous travelers," Lavrov said.

On Wednesday a delegation from the Norwegian Justice and Foreign Ministries met with representatives of the Russian Migration Service to discuss the issue.

Thor Arne Aas, Director General of the Norwegian Ministry of Justice, told Norway's Afterposten that as a result of the meeting Russia agreed to take back between 200 and 300 failed asylum seekers who have a valid Russian visa or right to reside in Russia.

© AFP 2020 / Jonathan Nackstrand
Over 800 Asylum Seekers in Norway Withdraw Applications
Norway wants Russia to take 700 failed asylum seekers who they believe have a right to remain in Russia, and Russia agreed to consider the readmission of those individuals on a case by case basis.

Norway agreed to Russia's request not to bus the migrants back across the border at Storskog, but rather to send them by plane to Moscow. Russia agreed that Russian border guards will stop migrants and refugees from trying to enter Norway without a valid Schengen visa.

During 2015 around 5,500 people, mainly Syrians but also asylum seekers from Iraq, Afghanistan and some North African countries, crossed the border at Storskog and claimed asylum in Norway. Many of them traveled across on bicycles because the border crossing station allows vehicle transit but prohibits crossing the border on foot.