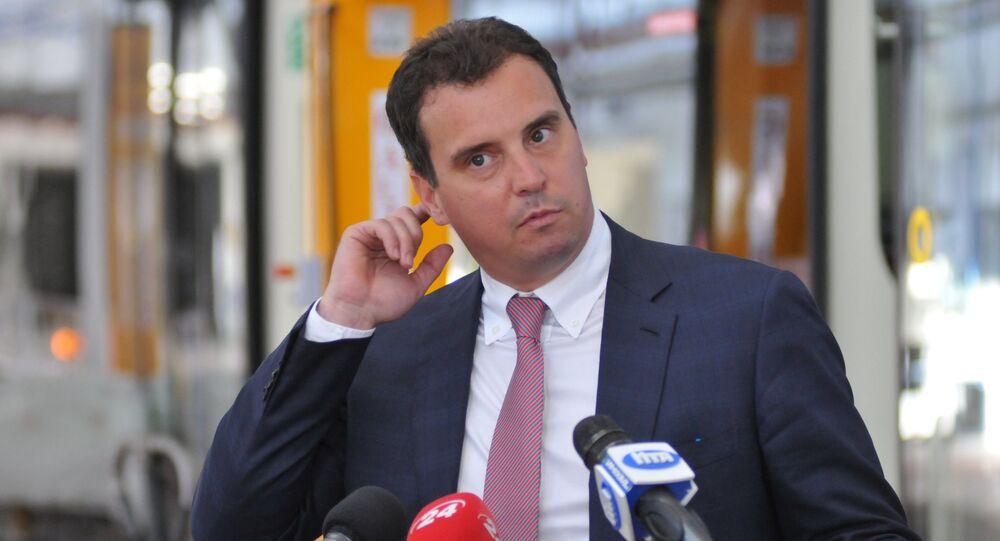 © AFP 2021 / SERGEI SUPINSKY
New French Film on Ukraine May Change Anti-Russia Stance
"We are deeply disappointed by the resignation of Minister for Economic Development and Trade, Aivaras Abromavicius, who has delivered real reform results for Ukraine,” said a statement posted on the official website of the Swedish embassy in Kiev.

"It is important that Ukraine's leaders set aside their parochial differences, put the vested interests that have hindered the country's progress for decades squarely in the past, and press forward on vital reforms," the authors of the statement concluded.

The statement was signed by the ambassadors of the US, the UK, Germany, France, Italy, Japan, Sweden, Switzerland, Canada and Lithuania.
Earlier, the Ukraine’s Minister of Economy Aivarus Abromavicius announced his resignation, citing  increased attempts at the political level to block vital reforms carried out by his agency.

"It is not merely the absence of support on the political level, these are direct actions aimed at paralyzing our work," Abromavicius said during a press conference in Kiev.

According to BBC, the minister's resignation was also caused by his unwillingness to 'cover' the rampant government corruption in the country.

The former Ukraine’s Vice Prime Minister Serhiy Arbuzov also remarked that this resignation may be a sign of a deep political crisis within the country.

"It’s just as I predicted many months before – the members of the ‘Maidan’ team are fleeing the sinking ship, unwilling to take personal responsibility for collective actions like the collapse of the economy, the deteriorating standards of living and armed gangs on the streets of the Ukrainian cities," Arbuzov told RIA Novosti.

At the same time, he added, these events are not the end of the ‘Maidan’ experiment – they merely herald the changes among the people who carried it out.