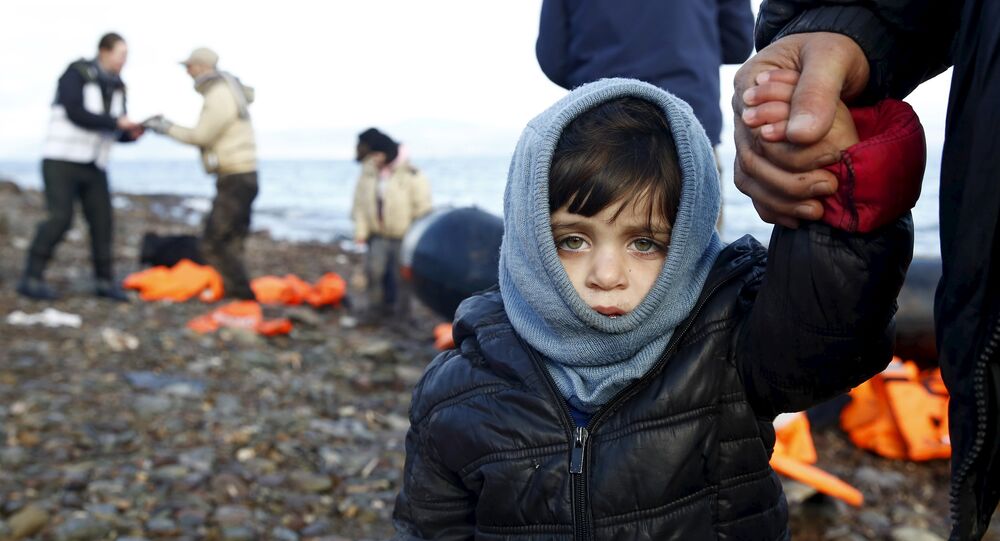 A group of world leading economists have slated Britain's response to the refugee crisis, describing it as "misguided" and "morally unacceptable."

More than 120 economists, including a former foreign office minister and United Nations deputy secretary general, have put their names to an open letter to UK Prime Minister David Cameron calling for Britain to take its "fair and proportionate share" of refugees.

How the UK compares to the rest of Europe on the refugee crisis https://t.co/BGM4GsVysF pic.twitter.com/UFaRK6o6Ir

The British Conservative government has agreed to resettle 20,000 Syrian refugee camps — but only from camps bordering Syria. Only 1,000 have arrived in the UK so far.

"The benefits of having migrants must be considered all of the time," Guy Standing, Professor of Development Studies at SOAS, University of London told Sputnik.

"Research in the UK and Europe shows that the costs of migration to the economy are much less than the benefits. They work harder; they're more productive and contribute energy and ideas to society.

"The posturing by the British government is something close to disgusting — it is disgusting," Professor Standing told Sputnik.

Professor Standing, one of the signatories, told Sputnik that countries that have allowed large numbers of migrants to enter in the past have benefited "enormously."

"The influx of refugees from East Africa in the 1970s was both beneficial for migrants and refugees — and the British economy.

"This is a long term test for all of us in Europe, including Russia and Eastern Europe. We're talking about a tiny number of refugees. We've always allowed more into Britain in the past — we cannot regard ourselves as a feeble economy.

"It's one of the saddest chapters of our civilization in our lifetime. It's tragic," said Professor Standing.

Professor Standing points out that it isn't just a moral and humanitarian issue — but an economic one too.

"From an economics perspective, the policy doesn't make sense. It's playing dirty politics to appeal to far right voters to avoid UKIP gaining more ground. The politicians should feel ashamed — but they don't."

The public however, according to Professor Standing is in danger of becoming saturated by tales of human suffering.

"There is a real danger all us can be so saturated by stories of human suffering that people will lose the ability to feel any empathy or express any sympathy."

@HackneyAbbott how many homeless kids already in the UK? will these new arrivals leapfrog them into a new home?

"We are witnessing enormous tragedies. These disappearing children, the orphans, the breakup of families and the suffering is on such a scale that we must keep it at the forefront of our minds."

It's estimated that around 300,000 people have been killed and ten million displaced since the start of the Syrian crisis.

"To think that the UK can only take 4000 a year is despicable and shameful," Professor Standing told Sputnik, calling the numbers that Britain has agreed to settle "an insult."

In the open letter to David Cameron, economists say the offer to resettle 20,000 Syrians is too low.

"Britain took in over 80,000 asylum seekers in 2002," Professor Standing explains. "Nobody noticed that it had an adverse effect, they've been absorbed.

"The small numbers the government has agreed to settle are an insult. They don't compare to other EU countries. Britain seems to be behaving worse than all of our European neighbors and we're seeing a nasty trend all around."

© AFP 2021 / Stefan Rousseau
Look Who's Talking! UK Expects Lebanon to Do More for Syrian Refugees
The letter states that refugees should be taken in because they are "morally and legally entitled to international protection, not because of the economic advantages they may bring."

It's the first time a group of senior economists have hit out at the UK's immigration policy. The greatest cost, according to Lawrence King, Professor of Sociology and Political Economy at the University of Cambridge, will be to the refugees' well-being.

The cause, says Professor King who also signed the letter, was the occupation of Iraq by the US and the UK.

"This is a legacy of hypocrisy […] The root of the crisis was the occupation of Iraq by the US and the UK — this was probably the single biggest cause of today's refugee crisis. Britain has a historic responsibility — as does the US — but they are shirking the consequences of past military intervention," Professor King told Sputnik.

Europeans will — according to Professor Standing — pay the price of the refugee crisis with their reputations.

"I think the long-term damage will be to our reputations as Europeans. It's going to be huge and I think we will have ramifications for many years to come."