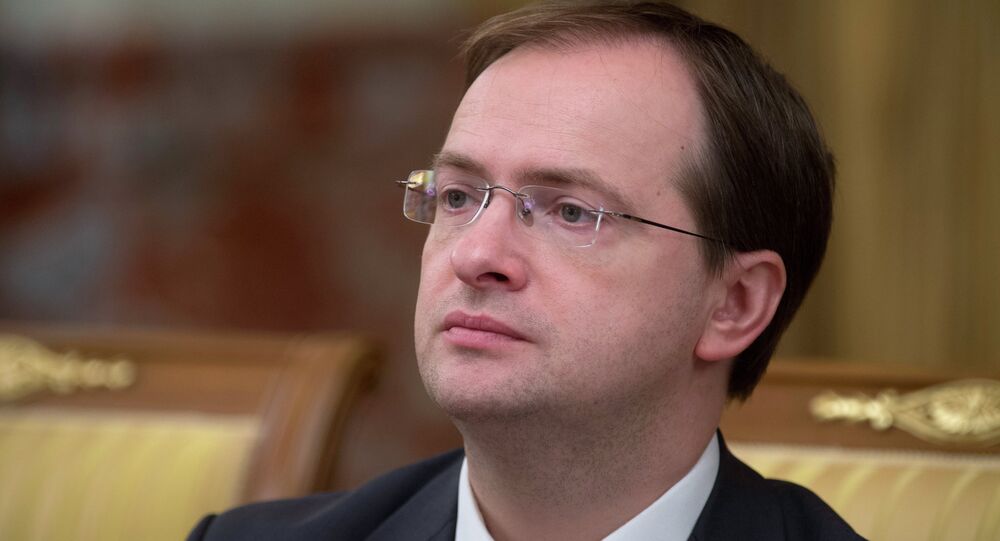 The producer of the Polish TVP television channel, Marek Czunkiewicz, has been fired after sending a letter of apology to Russian Culture Minister Vladimir Medinsky for a disrespectful interview by the broadcaster's anchor, local media reported Saturday.

MOSCOW (Sputnik) — During the interview that the minister gave to TVP, the presenter, Maria Przelomiec, repeatedly interrupted Medinsky, not giving him an opportunity to respond to the questions. While discussing a monument to Soviet general Ivan Chernyakhovsky, which was dismantled in the northern Polish town of Pieniezno in September, Przelomiec said Chernyakhovsky had killed the leaders of the Polish Home Army.

Medinsky refuted the accusations but was not given enough time to expand on the issue.

Mariusz Pilis, the head of the Polish Television Information Agency, a branch of TVP, stated that Czunkiewicz' apology letter did not reflect the official position of TVP, according to Rzeczpospolita newspaper.

© Sputnik / Morozov
Diplomatic Drama: 70 Years Later, Poland & Russia Still at Odds Over WW2 History
Medinsky visited Poland on International Holocaust Memorial Day, January 27. The date to commemorate the millions of victims of Nazi Germany was chosen to coincide with the liberation of the largest Nazi concentration camp network, Auschwitz-Birkenau, by the Soviet Army in 1945.

Relations between Moscow and Warsaw have been strained amid repeated demolition and dismantling of Soviet monuments in the country and attempts by some Polish officials to distort history and to belittle Soviet soldiers' contribution to the victory over Nazism in World War II.