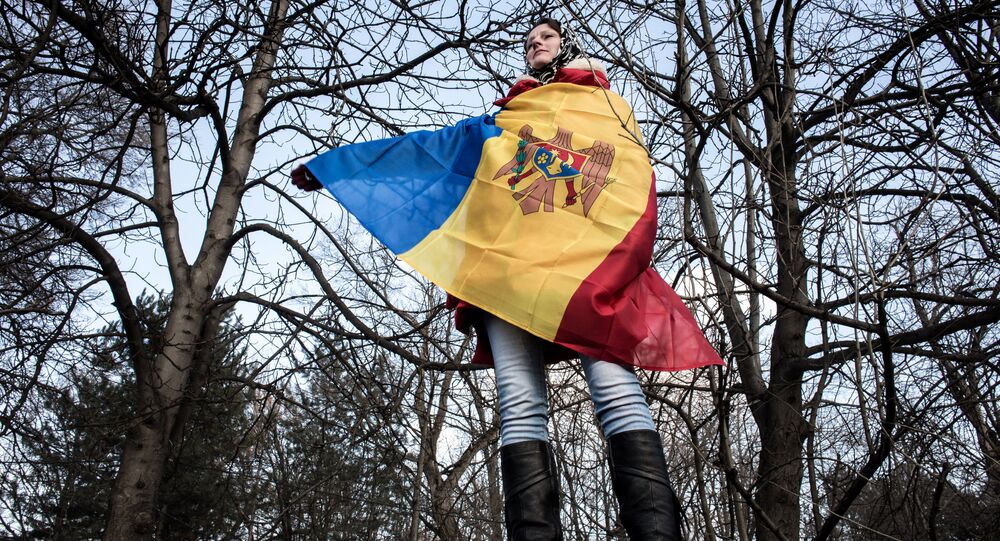 As the political crisis in the former Soviet Republic of Moldova escalates, with the country's disgraced pro-EU government lurching from one crisis to the next, Russian analysts are pondering how exactly Moscow should react, especially given the fact that the mass protests threatening the government have been characterized as 'pro-Russian'.

Since last week, Chisinau, the capital of the Republic of Moldova, an ex-Soviet republic with a population of 3.5 million situated between Ukraine and Romania, has been rocked by mass protests attended by upwards of 100,000 people.

Organized by the eurosceptic Party of Socialists and the left-populist Our Party of businessman Renato Usatii, as well as the pro-EU Dignity and Truth Platform Party (which demands a complete reset of the country's corruption-mired political system), protesters are calling for the dissolution of parliament and snap elections.

© Sputnik
Moldova Protesters Deliver Ultimatum to Gov't to Fulfill Opposition Demands
The anti-government protests, which had gripped the Moldovan capital for months, came to a head last week following parliament's approval of Prime Minister Pavel Filip and his cabinet on Wednesday. In response, protesters stormed the parliament building, and police began using tear gas against the protesters, resulting in dozens of injuries.

Preceding Wednesday's clashes, for months, activists had demanded the resignation of the president, the prime minister and the chief prosecutor, and early parliamentary elections, together with substantive anti-corruption reforms.

Moldova entered the new year without a government and mired in a deep political crisis, following a corruption scandal which forced the ruling pro-EU government of Prime Minister Valeriu Strelet to resign in late October, and that of his predecessor, Chiril Gaburici, in June of 2015. The crisis began in early 2015, when it was discovered that over $1 billion, equivalent to about 15% of the country's GDP, had disappeared from three Moldovan banks in 2014 following parliamentary elections.

Regarding the protests themselves, last week, presidential press secretary Dmitri Peskov told reporters that Moscow's official position has been to call on all parties to refrain from violence.

"The Kremlin, of course, is closely following all developments in Moldova. And of course, we call on all parties to respect the rule of law, to remain calm, and hope that all forces supporting either side will refrain from any violent actions," Peskov said.

The niceties of diplomatic language aside, it's obvious that Moscow is following developments in Moldova closely, not least because the protests could result in a shift in the country's geopolitical orientation.

Commenting on the situation in an analysis for Russian business magazine Expert, journalist and political analyst Gevorg Mirzayan laid out what's at stake.

So far, the journalist writes, "the ruling coalition has refused protesters' demands [for early elections]. And not just because, judging by the polls, it will lose power. According to the same polls, if early elections were to take place, Moldova may change its foreign policy orientation. Given the population's discontent over the work of the right-wing Europe- and Romania-oriented government, Moldovans might vote for representatives of the left, which are considered pro-Russian, and who seek to develop political and economic ties with Moscow."

© Sputnik
Protesters in Moldova Establish National Salvation Council, Block Traffic
"This is also why the European Union and the United States are also against early elections…with Victoria Nuland speaking on the need for Moldova to form a 'pro-European government'."

"As for Moscow's position," Mirzayan notes, "it has not yet been determined. There is nothing strange about this, if one understands some of the details of the situation, and geography."

The situation, the analyst suggests, calls to mind Romania's entry into the First World War on the side of the Allied Powers, which ended up not strengthening, but over-extending and eventually critically weakening, Russia's position on the Eastern Front.

"Yes, the coming to power of pro-Russian or 'conditionally pro-Russian' forces in Moldova would be a public relations coup. Russian officials and diplomats would be able to speak of a country which has experienced all the 'charms' of European integration, and has decided to return to orienting themselves toward the tried and proven path toward Moscow, and toward the long-established Russian markets."

Moreover, their victory "would help the Kremlin defuse the crisis over Transnistria. It's worth recalling that today, in spite of existing agreements, Moldovan authorities have factually enforced a blockade of the unrecognized republic, not only preventing trade, but preventing citizens with Russian passports onto the territory."

"However," the analyst warns, "on the other hand, the question arises of what Russia will be able to do" to help Moldova. "After all, the country is sandwiched between two countries – Ukraine and Romania. The former's reaction to pro-Russian forces in Chisinau would not be difficult to guess – a sharp hardening of relations and an economic blockade of Moldova from the east would be almost inevitable."

© REUTERS / Viktor Dimitrov
Police in Moldova's Capital Cordon Off Administrative Buildings Amid Opposition Protests
"As for Romania, here too there are several possible negative scenarios. It's doubtful that the EU will simply close its eyes on Moldova's demonstrative return to the Russian orbit, and using a deterioration of the socio-economic situation, they would attempt to convince Moldovans that they have made the wrong choice."

"As a result," Mirzayan suggests, "Moscow, which already has its hands full, will have to analyze all the options for supporting a pro-Russian government in Chisinau." Ultimately, the longer the ruling pro-EU coalition continues to discredit itself via corruption scandals and a disastrous socio-economic policy, the stronger the pro-Russian opposition will become in the long run.