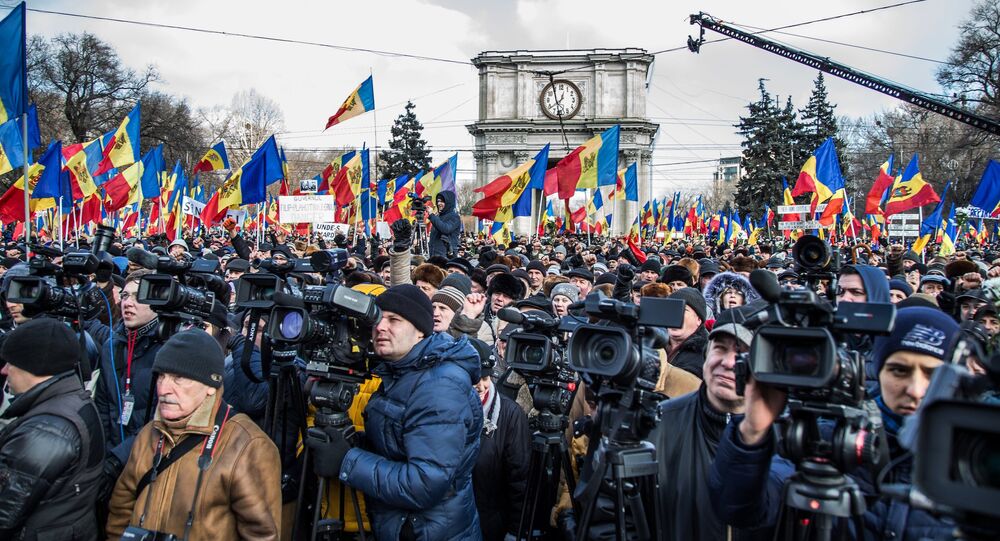 Moldova's protest-beleaguered government has begun deporting journalist in what international bodies have called an assault on media freedom. The actions appear to have partially been motivated by a smear campaign against Russian journalists as "propagandists."

Moldova has ejected at least ten journalists over the past week alone, including RIA Novosti correspondent Timur Khursandov and an AFP (Agence France Presse) stringer, amid protests against the country's pro-European Union government.

Protests against the country's government by left-wing and non-parliamentary right-wing protesters turned violent last Wednesday, after a clash with the police and dozens injured. Moldova's government has pursued a policy of controlling the information which leaves the country by preventing foreign correspondents from both Russia and EU countries from entering the country.

© Sputnik / Pavel Pakhomenko
'We Are the Power': Some 11,000 Anti-Government Protesters Gather in Moldovan Capital (VIDEO)
Flights coming in from Moscow face a "special control," with a state security service officer added to the border control. Smear campaigns against Russian journalists on charges of "propaganda" appear to have been used by the Moldovan government as a stated motivation for deporting journalists.

"What is the purpose of your visit?"

Honestly answering "I am here on an assignment to cover the events in your country" is enough to get barred from Moldova. A RIA Novosti correspondent who said that he was passed to the state security service, who then talked among themselves and checked his documents.

When asked why the check is taking so long, he was told "We are finding out the reasons for your delay."

"Really, it was clear that I would probably not be allowed into the country. After being pulled from passport control, I was taken to the luggage carousel to take my suitcase and return behind the border line," Khursandov said.

© Sputnik
Moldova Protesters Deliver Ultimatum to Gov't to Fulfill Opposition Demands
An hour later, he was was then transferred to the regular police, who escorted him to the departure zone, only saying that it was an "order from the leadership."

Moldova's border police spokeswoman later claimed to RIA Novosti that Khursandov and the AFP stringer "could not explain the purpose of their visit."

Picking Up a Shameful Torch

Russian border guards, who met Khursandov in Moscow, as mandated for deported Russians, said that such cases have become anything but rare, with the two deported journalists already the second group of the day.

"Back in the day, they were deported en masse from Ukraine, we barely had the time to meet them all. And now it's Moldova," one border guard told Khursandov.

The cases have been increasingly frequent, with an NTV television crew deported in October, and a Russian state television crew covering events in autonomy-seeking Gagauzia ejected in March.

After protests intensified, the deportations of journalists followed. Three television stations were ejected on Thursday, and a TASS photographer was not let in on Friday. One of the state television journalists was deported and banned for five years, which Moldovan officials explained by saying he was on a "blacklist."

© REUTERS / Viktor Dimitrov
Police in Moldova's Capital Cordon Off Administrative Buildings Amid Opposition Protests
On Sunday, a Christian-oriented Tsargrad satellite channel crew was ejected despite entering the country to film a segment about a local church in the Moldovan countryside, on a local bishop's invitation.

Other than the AFP photo stringer rejected on Friday alongside Khursandov, Moldova rejected Czech international broadcaster Radio Praha journalist Martin Dorazin, apparently for the sole reason of arriving from Moscow.

"I was asked about the purpose of my visit. I said I'm a journalist. They stamped my passport, but then said 'Wait, we have talk this over some more,'" Dorazin told RIA Novosti.

An hour and a half later, he was also rejected after what he said was the state security service's attention to a Russian visa in his passport.

"I realized that they didn't like that I came from Moscow, that I work in Moscow. This created some suspicion, I heard one say 'God only knows who he works for,'" Dorazin added.

© REUTERS / Viktor Dimitrov
Moldovan Opposition Urges Constitutional Court to Annul PM Appointment
The agents also told Dorazin that he needed accreditation from Moldova's Foreign Ministry, something that could only be received after physically going to the ministry building. After being told his visa was annulled, Moldovan government officials demanded that Dorazin leaves on the next flight.

"I was taken to the flight with various threats, that they could even use violent means, even though I said 'Let's be calm, I can return to Moscow on the evening flight, let's be humane,'" Dorazin told RIA Novosti.

Russia called Moldova's treatment of journalists unacceptable, and an assault against freedom of speech.

"We strongly condemn the Moldovan government's policy of limiting media activities, and enacting sanctions against journalists. We await a corresponding evaluation from specialized organizations, which react to countries' violations of internationally agreed obligations in the media sphere," the Russian Foreign Ministry said in a statement.

The Organization for Security and Cooperation in Europe's (OSCE) media freedom spokeswoman said that it is concerned about the violations of media freedom in Moldova.

.@OSCE_RFoM Mijatovic calls on authorities in #Moldova to allow free and unhindered work of journalists https://t.co/O1eDNTkhHp

"I call on the Moldovan authorities to reconsider the use of restrictive and selective measures in relation to media outlets affected by the entry ban and to allow all journalists to pursue their professional activities unhindered," Mijatović said in a press release.

According to the OSCE statement, Moldovan authorities imposed similar restrictions against Russian journalists at least seven times over the course of 2015, with the authorities citing "the need to address the issue of propaganda among the main reasons for denying journalists to enter the country."