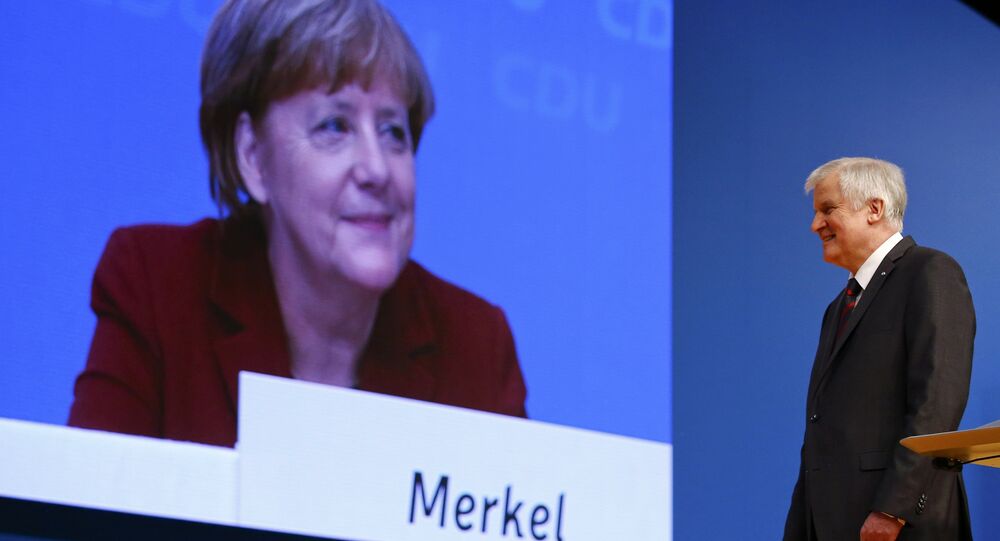 The German government's inability to resolve the current migration crisis is likely to have serious repercussions during the 2017 elections in Germany, according to Bavaria's Prime Minister Horst Seehofer.

© AP Photo / Michael Probst
Germany Hints at Reduction in Refugees as Merkel Fights to Regain Authority
The magazine Der Spiegel quoted Horst Seehofer, Bavaria's Prime Minister and head of the Christian Social Union (CSU), as saying that the CSU will face a total flop in the 2017 elections if the ongoing migration crisis is not solved.

His remarks came amid a widening split over refugee quotas between Chancellor Angela Merkel and the Bavaria-based CSU, a sister party to her Christian Democratic Union (CDU).

© REUTERS / Fabrizio Bensch
A bus (R) with refugees from the Bavarian town of Landshut is pictured after its arrival to the Chancellery building in Berlin, Germany, January 14, 2016

Merkel has repeatedly opposed such restrictions, but she remains under increasing pressure from her Bavarian allies to toughen her stance.

Seehofer has, meanwhile, warned of "dramatic repercussions" related to integration, security and the government's functionality in the event that the CSU's demands for refugee admissions caps are not met.

honestly, the lack of solidarity of the EU during the refugee crisis is just…awful. germany alone takes a third of all the refugees

Right now, Merkel faces a spate of challenges from the CSU and right-wing CDU MPs, who are calling for further restrictions on refugees, including the right of refugees to bring in family members. Merkel has more than once made it plain that she will not back such measures, and the center-left Social Democratic Party (SPD), the third coalition government partner, is opposed to them as well.

#Zakharova: We note the ineffectiveness of the #EU efforts to settle the migration crisis due to a lack of coordination

© AP Photo / Michael Sohn
Merkel Enforces Party Unity While Losing European Support on Refugees
Earlier this month, Merkel was once again forced to toughen her stand on refugees after the total number of complaints over sex attacks in Cologne on New Year's Eve — involving men of Arab or North African appearance — reached 379, according to police.

Merkel was harshly criticized both at home and abroad over her 'open door' policy on refugees, which saw over a million migrants — mainly from Syria, Afghanistan and Iraq — cross into Germany last year alone.

Europe is currently facing its biggest crisis since the formation of the EU as it struggles to cope with the biggest mass movement of people since the Second World War.

Fork It Over: Germany Confiscates Migrants' Money to Cover Expenses