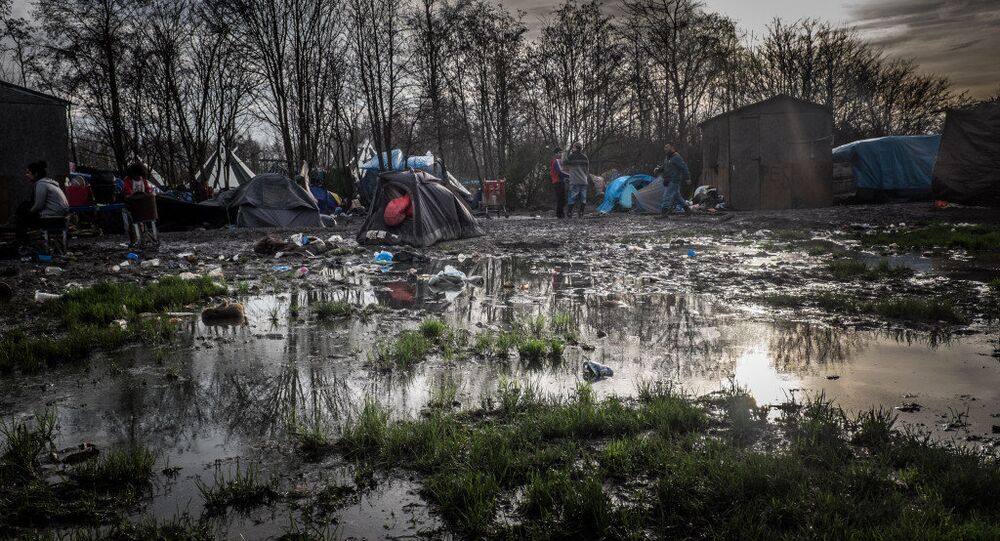 While many pages have been filled with stories from the so-called Jungle refugee camp in Calais, another refugee camp – Dunkirk – around 50 kilometers away from Calais, hasn’t been talked about very much.

"This place is for animals, not for humans. France is not good for us," one of the refugees, Omed Mohamed, told DW, while standing ankle-deep in the mixture of mud and human waste.

© REUTERS / Benoit Tessier
A migrant is reflected in a puddle as he walks past shelters in a muddy field called the Grande-Synthe jungle, near Dunkirk, northern France

Dunkirk is arguably Europe's worst refugee camp and has conditions "unseen anywhere else along the migration trail," said Angel Muller, a project coordinator for Doctors Without Borders (MSF) in Grande-Synthe, according to DW.

The camp has only two water faucets and one toilet per 115 people. Rats are said to be crawling around the tents in search of scraps of food. Needless to say, the smell around the camp can be intolerable to many, but refugees in Dunkirk have no choice.

© AFP 2020 / PHILIPPE HUGUEN
Migrants get warm around a brazier in the migrants camp of Grande-Synthe, near Dunkirk

Muller said that refugee camps in South Sudan with 80,000 people are better coordinated than the Dunkirk camp, which has 3,000 people in a rich country like France.

"It's really a shame for me [as a French citizen]," Muller told DW.

Since a local municipality clearly isn't doing much to alleviate the dire situation in the camp, refugees are able to survive only thanks to MSF and volunteers willing to help out of the goodness of their hearts, according to DW.

Volunteer Mecha den Houdyker, for example, visits the camp every weekend to clean up drainage ditches, submerged waist-deep in them, hoping to decrease the spread of disease. The drainage ditches are often used as bathrooms.

Just last week, the head of the MSF mission in France told Sputnik that the French government was not willing to spend a single cent on the construction of a new refugee camp. So MSF alone would have to construct a new camp.