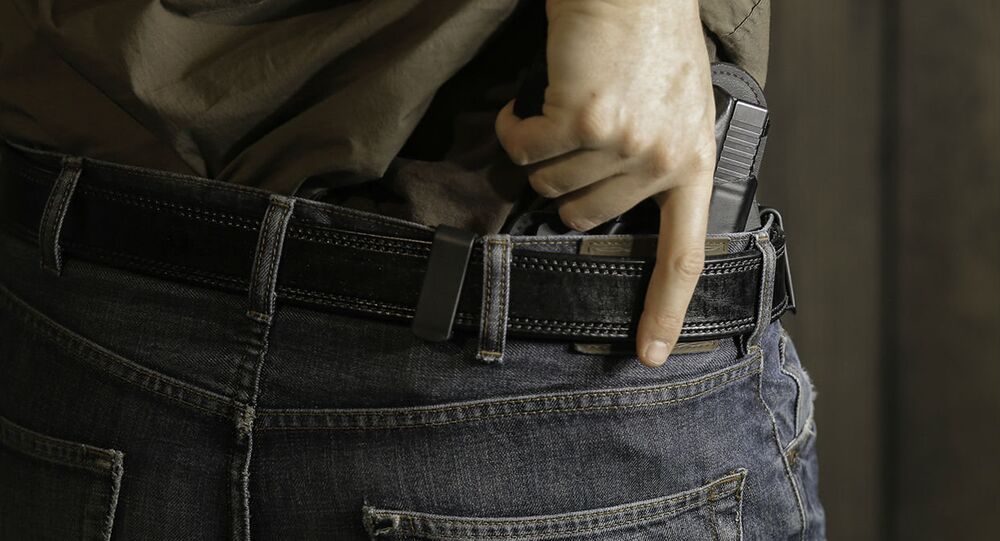 With the sales of pepper spray, air guns and other self-defense weapons in Germany skyrocketing in the wake of the New Year’s Eve assaults in Cologne and other cities, Sputnik discussed the matter with the German Rifle Association President Katja Triebel.

© AP Photo / Hermann J. Knippertz
Shell Shocked: Germans Stock Up on Tasers After Cologne Attacks
When asked about the situation at hand Katja Triebel said that pepper spray and gas pistols have been top sellers since October and their sales have gone literally through the roof since New Year’s Eve.

After the events in Cologne some politicians demanded  that police be allowed to use firearms against offenders.

“I don’t think the events in Cologne justify the use of firearms. As a woman I believe that rape is terrible trauma to the victim, but most of the sexual assaults that happened that night were not about rape, women were groped. This is absolutely disgusting, but I still don’t imagine police using firearms in Cologne because many innocent people could be hit by stray or ricocheting bullets,” Katja Triebel emphasized.

When asked if people in Germany can simply walk into a gun store and buy a Kalashnikov assault rifle, she said that was impossible.  To buy a firearm in Germany one needs to be a sportsman, hunter or collector. One can also buy a weapon for reasons of self-defense, but obtaining a license is not easy.

Even court marshals are not allowed to acquire a firearm and can only carry service pistols they are issued in the line of duty.

When asked what kinds of self-defense weapons people can buy without a license, Katja Triebel said that various types of pepper spray are available to anyone aged 14 and over, but you can only use it to defend yourself against, say, an angry dog or wild boar.

In all other cases police will consider this as a violation of the existing gun laws.

In the wake of the recent terrorist attacks in Paris the European Commission wants to toughen gun laws across the continent.

Katja Triebel does not think this will happen as Interior Ministers of several East European countries are opposed to the proposed ban on the sale of semiautomatic weapons.

A similar bill is now being discussed by the German parliament because if the European Commission has its way, the ban would affect legal gun owners only but would do nothing to curb the illegal sale of firearms.

The proponents of the proposed ban point to the recurrent cases of shooting sprees and gun-related accidents happening in the United States.

“Well, there are fifty states there, each with its own set of gun laws…  I can’t recall a single legislative initiative that effectively prevented the illegal use of firearms in America,” Katja Triebel said.

Criminals, members of outlawed political parties and organizations must not be allowed to buy firearms, just like teenagers and people suffering from mental disorder.

“Members of the so-called 'risk groups' must not have access to lethal weapons, but we also know that many of them are still able to buy firearms illegally. That’s why the police should focus their attention on exactly such violators, who simultaneously are potential victims, instead of imposing additional restrictions on law-abiding citizens,” Katja Triebel said in conclusion.