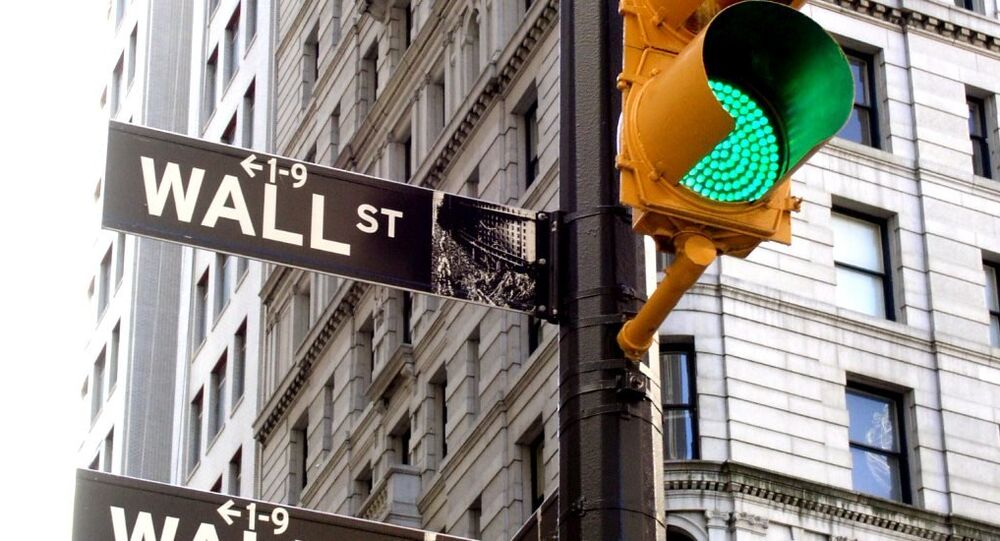 Supporters of Britain's exit from the EU have been outraged by a revelation that two Wall Street banking giants, Goldman Sachs and JPMorgan have donated six-figure sums to the coffers of Britain Stronger in Europe, a cross-party group leading the 'In' campaign.

Britain Stronger in Europe, which is led by former M&S Chairman Lord Stuart Rose, is expected to become the official pro-Brussels campaign group once David Cameron has concluded his talks with other European leaders. The donations will help the group generate pro-Brussels spin in the run-up to the British referendum on whether to stay in or leave the EU.

The news which Goldman Sachs and JPMorgan as well as the pro-EU campaigners declined to comment on, was leaked at the World Economic Forum in Davos where the British Prime Minister David Cameron has been making the case for staying in a "reformed EU." Before that, Cameron held a Business Advisory Group (BAG) meeting during which he called on its members to speak out in support of his renegotiation efforts.

In a speech at the Davos Forum, Cameron said the "voice of business" must be heard in the run-up to the referendum on the UK's membership of the EU — which is said to take place before the end of 2017.

But business is split in its attitude towards the EU and is pushing for an earlier vote to end the controversy and uncertainty as soon as possible.

Threats to UK or Tax Advantages to Banks

Goldman Sachs and JPMorgan who employ thousands of staff at its European headquarters in London benefit from EU "passporting" rules that allow them to do business across the 28-member bloc, which has a single market of about 500 million people. The same applies to other US corporations with presence in the UK.

Former Goldman Sachs chief said it was "essential" for the UK to join the euro #wrongthenwrongnow pic.twitter.com/ZohqLIfpNe

Goldman's support for the UK's membership of the EU is long-standing.

In 2013, the co-chief executives of Goldman Sachs International wrote in The Times that Brexit would be contrary to Britain's national interest.

"Our location in London allows us to use the professional expertise in the City to serve broader European and global markets," Richard Gnodde and Michael Sherwood wrote.

"And from discussions with peers and clients we know our situation is far from unique.

Their sentiments were echoed by Morgan Stanley president Colm Kelleher, who told the Financial Times banking summit last November that "were Great Britain to leave the EU, you would see significant backlash against London as a global financial center."

Last November it emerged that David Harding, founder of Winton Capital Management, was joining the board of the cross-party campaign to keep Britain in the EU and was understood to be donating several million pounds.

On the other hand, a number of high-profile City figures have adopted the opposing position, including Crispin Odey, the hedge fund manager, and Helena Morrissey, the boss of Newton Investment Management, who believe the risks of Brexit have been overstated.

"I know one global bank that is spending US$75m, because you've got to think about [your] real estate footprint, moving people, tax implications," he said.

How much of this is scaremongering can be deduced from the advantages the global banks have been getting through their presence in the UK.

© Flickr / Images Money
UK Taxpayers Lose Billions in Contributions to Brussels - Report
The banks paid little or no tax in the country despite reporting billions of dollars in sales and profits, it was revealed through a Reuters investigation. Combined, the banks with a total workforce of 33,000, earned revenues of US$31bn (£20.9bn, €28.4bn) and raked US$5.3bn in profits from the UK in 2014. However, the total corporation tax they paid for the period was a meagre US$31m or 0.001% of their revenues.

The findings are derived from the banks' filings which have become available after a 2013 change to the European Union rules that made it mandatory for banks to publish country-by-country profit and tax breakdowns.

The filings also revealed that while some banks did not pay taxes because they reported losses in London, a few reported profits in smaller regions that had a lower tax jurisdiction.

UK workers get rights, security and more jobs and opportunities through being in the EU #StrongerIN pic.twitter.com/zirlO8pPAE

The Establishment of International Bankers

Goldman Sachs became a figure of huge controversy over its involvement in the US subprime mortgage scandal, which caused the 2008 financial crash. The news of the bank's donation to the 'In' campaign came on the same day that the bank reported a slump in profits for the fourth quarter of last year, triggered by a US$5bn settlement for mis-selling mortgage-backed securities before the 2008 financial crisis.

And the bank's controversial involvement in the Greek debt crisis was not lost on the critics of its interference with UK politics.

In a series of tweets criticizing the donation, Vote Leave, the group campaigning for a Brexit, highlighted Goldman Sach's previous involvement in European controversies including the Greek debt crisis.

JP Morgan warned that the UK economy would suffer if we didn't scrap the pound #wrongthenwrongnow pic.twitter.com/5bwp2jpWn5

The group tweeted a quote from Peter Sutherland, the former EU Commissioner and Chairman of the investment bank, in which he said that Britain's failure to join the euro would "reduce" its influence.

Goldman Sachs is reported to have systematically helped the Greek government mask the true facts concerning its national debt between 1998 and 2009. In September 2009, Goldman Sachs, among others, created a special credit default swap (CDS) index to cover the high risk of Greece's national debt. The interest rates of Greek national bonds have soared to a very high level, leading the Greek economy very close to bankruptcy in March and May 2010 and again in June 2011.

Lucas Papademos, Greece's former prime minister, ran the Central Bank of Greece at the time of the controversial derivatives deals with Goldman Sachs that enabled Greece to hide the size of its debt.

Petros Christodoulou, General Manager of the Public Debt Management Agency of Greece is a former employee of Goldman Sachs.

Mario Monti, Italy's former prime minister and finance minister, who headed the new government that took over after Berlusconi's resignation, is an international adviser to Goldman Sachs. So is Otmar Issing, former board member of the Bundesbank and the Executive Board of the European Bank.

Mario Draghi, the new head of the European Central Bank, is the former managing director of Goldman Sachs International.

Antonio Borges, Head of the European Department of the International Monetary Fund in 2010-2011 and responsible for most of enterprise privatizations in Portugal since 2011, is the former Vice Chairman of Goldman Sachs International.

Carlos Moedas, a former Goldman Sachs employee, is the current Secretary of State to the Prime Minister of Portugal and Director of ESAME, the agency created to monitor and control the implementation of the structural reforms agreed by the government of Portugal and the Troika composed of the European Commission, the European Central Bank and the International Monetary Fund.

This is what you get when you replace democratic accountability with a totalitarian monster state, built upon the old school tie system and crony appointments.

Arron Banks, the millionaire backing the UK Independence Party (UKIP), and the man behind the Leave.EU group, told Reuters the group would have turned down any Goldman Sachs donation.

"This comes as no surprise to those of us who have said all along that the referendum will be a campaign of the British people against the establishment of international bankers, multinational corporate tax dodgers and out-of-touch politicians… If Goldman Sachs had offered Leave.EU six figures we would have told them where to stuff it."