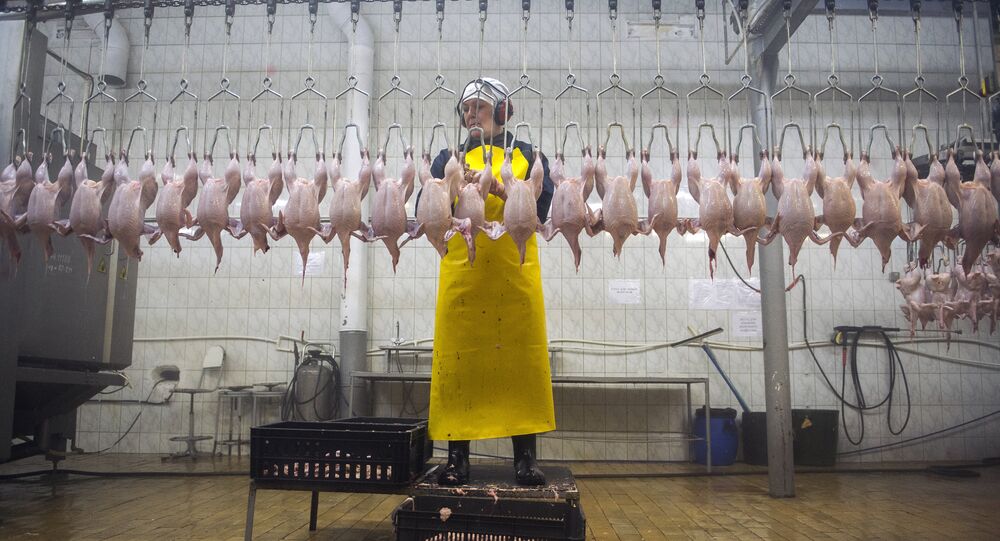 The European Union's free trade agreement with Ukraine turned out to be a "defrauding of Ukraine," according to Ukrainian President Petro Poroshenko's associate agriculture tycoon Yuriy Kosyuk.

In an interview to US government broadcaster Voice of America's Ukrainian service, Kosyuk said that the new free trade agreement will not help his company, as its import quota for chicken is a mere fraction of his company's production.

Nicknamed Ukraine's "chicken oligarch," Kosyuk controls nearly two thirds of Ukraine's chicken production and is an advisor to Poroshenko. Until December 2014, he was the deputy head of Poroshenko's administration.

"Europe talks of the Free Trade Area with Ukraine, and at the same time a load of exceptions and limitations are put on the export of Ukrainian goods. Because of this, the free trade area is only one-way, into Ukraine," Kosyuk told Voice of America.

Kosyuk also blamed the Netherlands' upcoming referendum on the Ukrainian association with the EU on a conspiracy of Dutch agricultural producers.

"I am convinced that the referendum Holland has made up regarding ratifying the EU's Association Agreement with Ukraine is one of the ways bywhich Dutch manufacturers, at least agricultural ones, are trying to shield themselves from Ukraine. And we know who is doing this"

Ukraine's membership in the Commonwealth of Independent States (CIS) free trade area, which covers much of the Soviet Union, was suspended after Ukraine joined the EU's free trade area on January 1, 2016.

Like many in Ukrainian business circles, Kosyuk initially favored the protests and coup which ousted Ukraine's former President Viktor Yanukovych over his break from the Association Agreement with the EU in 2013.

During protests in the lead-up to the coup, an infographic was circulated among activists, detailing trade with the EU, as an argument that the country's trade with the union can be an alternative to trade with Russia. The infographic showed Ukraine's exports to the EU in 2012, which appear to essentially mirror the quota policy.

© AP Photo / Emilio Morenatti
Kiev Authorities Turning Ukraine Into a Full-Fledged European 'Banana Republic'
Kosyuk said that he was unable to succeed in the chicken business in Russia because as far as three years ago, Russia already produced more chicken than it consumed. The grain branch of his business divested from Russia in June 2015, exchanging its Russian holdings for land in Ukraine which then belonged to a Russian company.

The agricultural tycoon also said that he remains pessimistic about Ukraine's economic recovery.

"There will be no economic growth, it is a lie. I think that the economy will decline this year. We see the attitudes in business, why would there be growth? There are several economic drivers. The internal consumer, when consuming, can move the economy upwards. But the internal consumer is becoming poorer and has less and less money. The second driver is external markets, but they have remained the way they have been. The third driver is foreign investment. But foreign investment will not come to Ukraine in the short term," Kosyuk said.