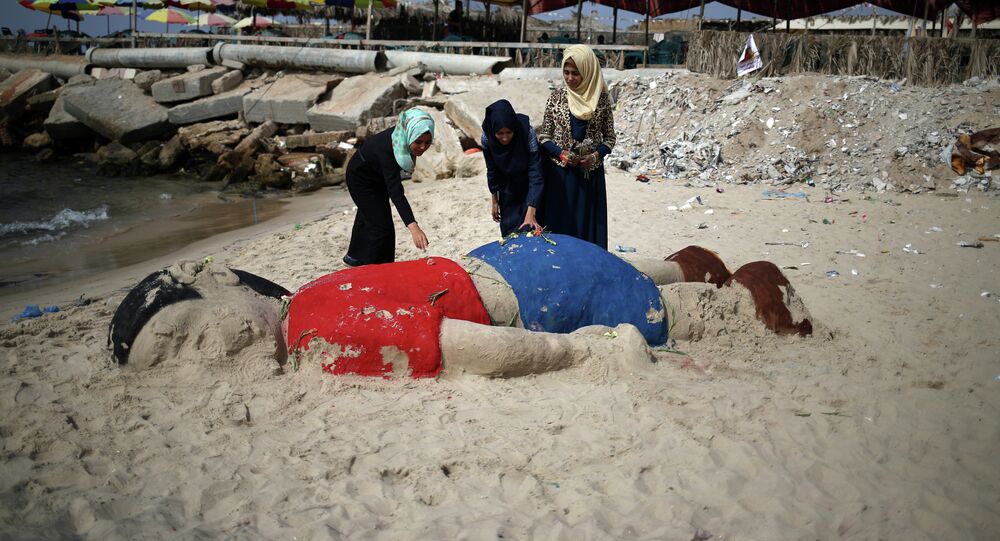 The image of a lifeless toddler washed up on a beach lying face down on the Turkish coast shocked the world last year; little Aylan Kurdi drowned in the Mediterranean Sea with his mother and older brother in an attempt to establish a better life in Canada.

© AFP 2020 / MARTIN BUREAU
'Charlie Hebdo's Cartoon is Cowardly, Not Heroic' - Russian House Speaker
The French satirical magazine Charlie Hebdo had published cartoons poking fun at the boy’s death before. However, it seems like the magazine feels like it hasn’t squeezed enough dark humor out of the lifeless body of the toddler.

The most recent caricature by Charlie Hebdo shows the migrant attacks on women living in Cologne that took place on New Year's night, but brings back Aylan like a running gag.

The caricature depicts a girl who is running away from men whose appearances resemble a cross between a pig and monkey. In the upper left corner of the image, the author drew Aylan Kurdi. The inscription under the caricature clearly hints that if the baby had survived and grown up he would be a rapist.

Disgusting cartoon in Charlie Hebdo ("what would've become of Aylan had he grown up? A groper") via @faizaz pic.twitter.com/iB4myFb1ke

​The recent cartoon has elicited a fresh storm of criticism from social media users.

Sputnik contacted the boy's father, Abdullah Kurdi and asked him to comment on the magazine’s most recent caricature.

"To be honest, after seeing this picture, I could not hold back my tears. I cannot even describe the feeling of bitterness that I experienced at that moment. What they did is horrible; it is an outrage to the memory of my son. Aylan was only two years old when his life was cut short."

The editorial staff should show respect to Aylan, to me and to my family. But the opposite has happened. This magazine should have treated the memory of the victims with respect — especially children,” Kurdi said.

He went on to say that previously the magazine had published insulting cartoons of the Prophet Mohammed and even Allah.

"If they dared to make a mockery of the most sacred, it is not surprising that they have published a caricature of my child.” “I appeal to this magazine and to the world, and urge everyone to respect the memory of all the dead children. Do not reopen the wounds of their loved ones as they continue to bleed," Kurdi said.