Calais Migrants Told to Leave to Make Way for Bulldozers

French police have given refugees and migrants living in the so-called Jungle camp in Calais two days to leave the site. Authorities want the 2,000 inhabitants to vacate their make-shift shelters and tents to make way for bulldozers.

The French government wants to dismantle a third of the camp and place permanent shipping containers there instead. However, many migrants living in the camp are unwilling to leave.

"We, the united people of the Jungle, Calais, respectfully decline the demands of the French government with regards to reducing the size of the jungle. We have decided to remain where we are and will peacefully resist the government's plans to destroy our homes. We plead with the French authorities and the international communities that you understand our situation and respect our fundamental human rights," a statement from different groups direct from the camp says.

Many migrants are concerned that once inside the shipping container camp they will not be able to leave. People will have to be fingerprinted each time they go in and out of the new settlement which refugees claim resembles a detention center.

The new camp also has no communal area compared to the informal jungle camp, which had communal kitchens, churches and mosques. 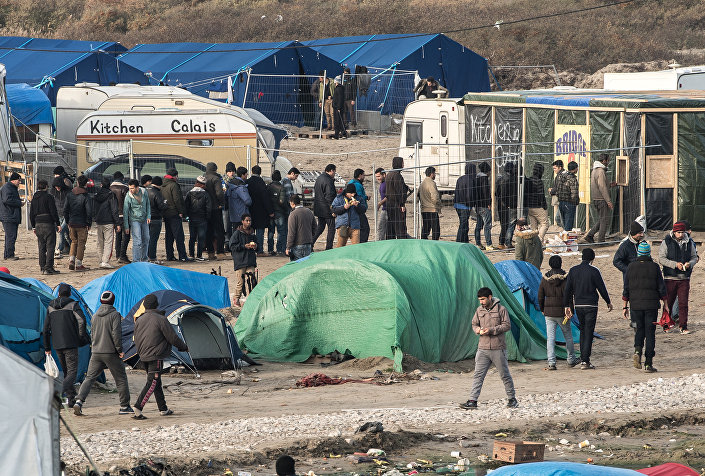 L'auberge des migrants International, an organization in Calais providing help for migrants living in the camp, has carried out what it says is a "basic survey" of a 200 meter area earmarked for demolition.

"We estimate in the region of 1700 including over 300 women and 60 children, some with disabilities and a considerable number of injured and sick people live in an area marked by the police… to be bulldozed by Friday", said the volunteers.

As inhabitants of the Jungle camp in Calais face eviction, French authorities have granted humanitarian organization Medecins Sans Frontieres (MSF) permission to build another camp for 2,500 people on the Grande Synthe site in Dunkirk.

Work is set to start on the site which has been described as "squalid" with 2,500 stranded in appalling conditions.

"Conditions in Grande Synthe are some of the worst that I have seen in 20 years of humanitarian work. Hundreds of families from Iraq Kurdistan, including many young children, are stranded in rivers of mud with just flimsy tents and blankets for protection from the cold. These deplorable conditions are already causing health problems and, when temperatures drop further, people could start dying of hypothermia," said Vickie Hawkins, MSF UK executive director.

This is how most of the #migrants and #refugees in #GrandeSynthe keep the French winter at bay, they burn trash… pic.twitter.com/3jYJuDyHEo

The Grande Synthe camp on the outskirts of Calais has grown considerably in recent months and is now home to thousands of migrants.

France to Open Refugee Camp for 2,500 People in Four Weeks