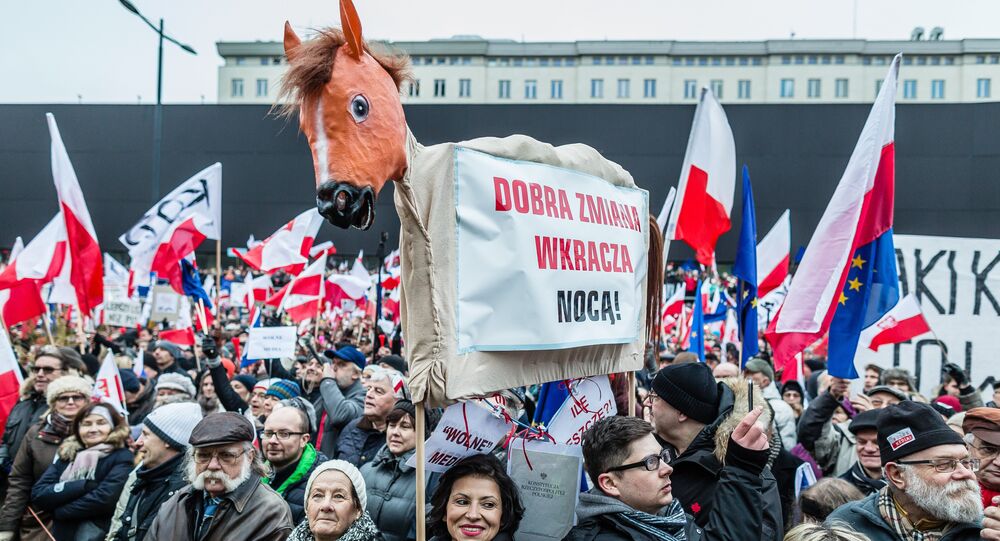 EU Plays Down Spat With Poland Over Fears of Inflaming Euroskeptics

European Commissioners are meeting in Brussels to thrash out a solution to the increasing tension between Warsaw and the EU over the Polish government's changes to the constitutional court and its attempts to take control of state media.

There has been growing concern within the EU ever since the Law and Justice Party (PiS) was swept to power in the October 2015 general election. As the first party to win an absolute majority since 1989, the PiS — led by Prime Minister Beata Szydlo — has moved quickly to assert its political authority.

European Commissioners discuss the developments of the Constitutional Court and the media law in Poland. #whatever pic.twitter.com/U7rknfDfBe

Its first move was to appoint five judges to the Constitutional Tribunal, which is supposed to make independent rulings, leading to protests accusing the Szydlo government of political interference in constitutional affairs. The move is widely seen as paving the way for the government to push through legislation with less opposition or oversight.

The European Commission is investigating whether Warsaw is in breach of the commission's 'rule of law mechanism' which seeks to is rein in EU member governments whose policies and legislation are seen to pose a "systematic threat" to EU values. Although the mechanism was passed last year, it has never been invoked, so this could be the first time is tested on a member state which is seen to be behaving undemocratically.

The second major issue between Brussels and Warsaw is the new media law that was rushed through the Polish parliament before Christmas, which allows the government to appoint the heads of the Polish state media, leading to protests that the move was effectively removing the independence of the broadcasters.

In a 45-minute call to Szydlo, European Commission President Jean-Claude Juncker sought to play down the affair. Sources within the EU say that — in spite of being in breach of EU principles — Poland is unlikely to be subjected to major sanctions for fear of fueling nationalist and anti-EU sentiment within Poland.

A group of international journalists last week launched a challenge at the Council of Europe over the new law — passed hurriedly before Christmas by the new Warsaw administration — that gives it the power to directly appoint the heads of public broadcasters.

In a letter — signed by the Association of European Journalists (AEJ) and the International Federation of Journalists (IFJ) and others — to the Council of Europe Platform to Promote the Protection of Journalism and the Safety of Journalists, the journalists said: "The legislation gives a government minister exclusive powers to appoint and dismiss all members of the Supervisory and Management Boards of TVP and PR, making them wholly dependent on the goodwill and favor of the government.

"The Polish government's plans directly contradict the commitments made by the Committee of Ministers of the Council of Europe in its 2012 Declaration on Public Service Media (PSM) Governance; that Declaration stated that PSM must remain independent of political or economic interference, and should be accountable and transparent as they have the obligation to serve the public in all its diversity," the letter said. The Council of Europe is investigating the media complaint.

The European Commission last week sent a letter to the Polish government warning that it may be in breach of EU principles and could be made subject to a special monitoring procedure or even lose voting powers. The European Parliament is due to debate the issue next week.

Journalists to Protest Polish Media Law in Brussels on January 13