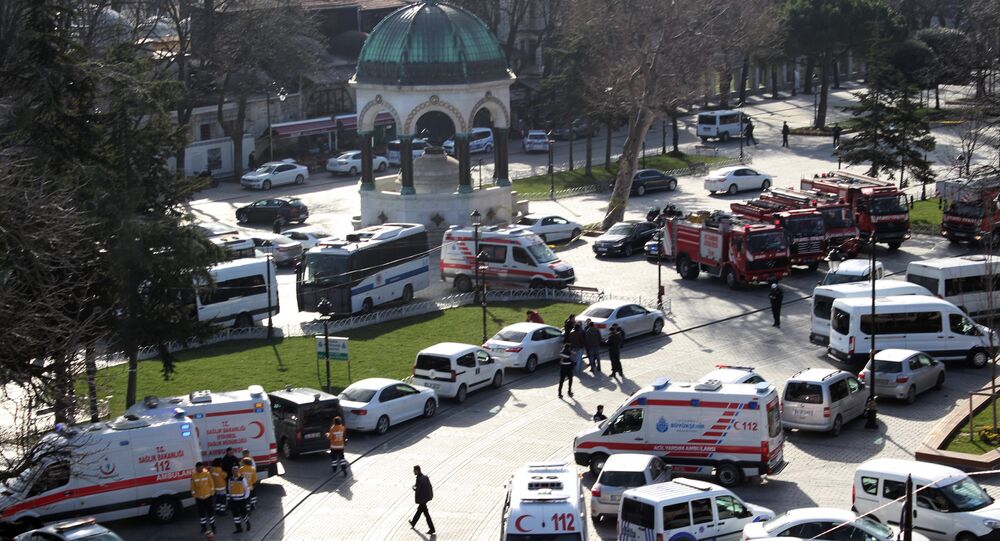 Turkish PM Ahmet Davutoglu blamed Daesh for the terrorist attack in central Istanbul on Tuesday which claimed the lives of at least 10 people and injured 15. The attack took place near major tourist sites, 9 of the victims are reported to be German citizens and one is Peruvian.

© AP Photo / Emrah Gurel
At Least 10 Killed, 15 Injured in Explosion in Central Istanbul
PM Davutoglu said a suicide bomber linked to Daesh had crossed into Turkey from Syria, but was not on the country's terror watch list. Right after the attack Ankara imposed a ban on the media coverage of the accident.

According to Turkish Anadolu news agency the ban was imposed to restrict the dissemination of information about the explosion that shook Istanbul earlier that day. The ban on the distribution of information will affect all kinds of news, interviews, analyses and other article formats in the printed press, on television, on the radio, via social networks and on the Internet, Anadolu news agency reported.

Gareth Jenkins, an Istanbul-based researcher with the Silk Road Studies Program at John Hopkins University, spoke with Radio Sputnik sharing his thoughts regarding the media censorship. According to him the Turkish authorities have become extremely authoritarian and many people have started to assume that by imposing these bans Ankara is trying to either cover its collaboration with Daesh or the incompetence of its security forces.

“The explosion was very large right in the city center. It was heard by very many people. For many months now there was a sense of trepidation in many cities across Turkey and it has certainly increased. A sense of fear has been reinforced and I think it’s not the last attack,” Jenkins said.

The researcher mentioned that this attack will be a serious blow to Turkish tourism as foreign citizens were hurt.

Talking about the ban on broadcasting that has been imposed by Ahmet Davutoglu following the incident, Jenkins said that he thinks it’s crazy. “The ban was imposed 75 minutes after the attack itself and there doesn’t seem to be any rational explanation for this ban.”

© AFP 2020 / ADEM ALTAN
Almost 800 Journalists Fired, 156 Detained in Turkey in 2015
He said that in the past there have been media censorship when there were attacks in which there seemed to be some sort of complicity or shortcomings of the security forces like back in 2013 and 2015 when there were suicide bombings on the Syrian border.

“The assumption is that they are not really trying to protect the public but are trying to protect the complicity or the incompetence of the security forces. The Turkish government still doesn’t understand that they really need to learn how to manage information. This broadcast ban came just after the first official statement so we had well over an hour during which there was panic caused by rumors and speculation. The ban just makes citizens panic a lot more,” Jenkins told Sputnik.

“I have been in Turkey for 26 years and I haven’t seen this level of self-censorship in all this time and it is getting worse,” Jenkins concluded.