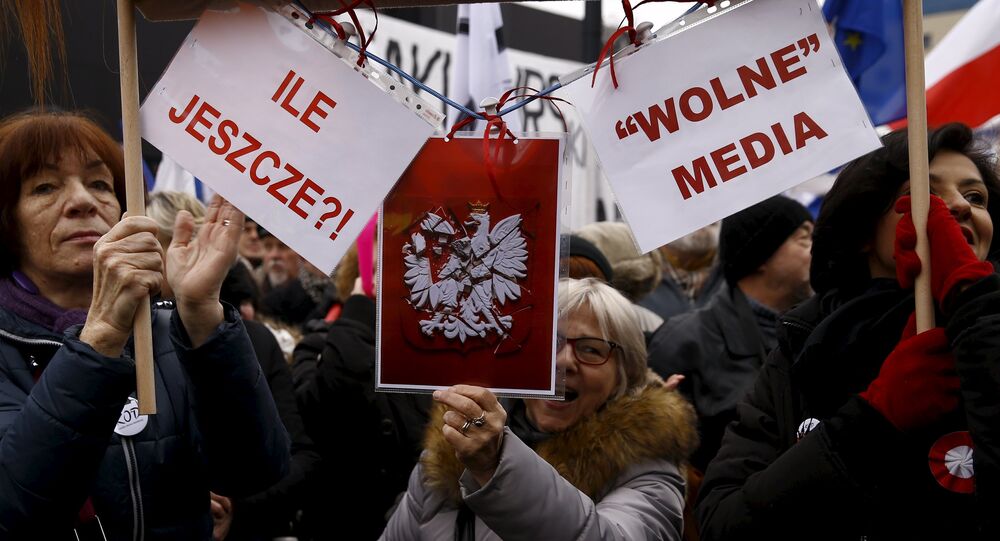 German lawmaker from the left-wing Die Linke party Andrej Hunko said that EU sanctions against Poland are impossible to achieve due to Hungary opposing the move, which requires unanimity within the bloc.

On Monday, European Commission spokesman Margaritis Schinas said that EU commissioners would discuss on January 19 further measures with regard to the newly adopted law in Poland, which places broadcasters under the direct control of the country’s government, leading to concerns over press freedom in the country.

"The reactions of EU-Commission and especially those of leading German politicians are not helpful. It feeds the PiS-government with further arguments, supports the escalation of anti-German emotions [in Poland] and will probably not change their course at all," Hunko said.

© AFP 2021 / JOE KLAMAR
Poland's New Gov't Undermines Free Press, Rule of Law – US Rights Group
According to Hunko, EU sanctions against Poland are impossible to achieve due to Hungary opposing the move, which requires unanimity within the bloc.

Over the weekend, the leader of the ruling German CDU party, Volker Kauder, suggested that EU nations should consider imposing sanctions on Poland if it is determined that European values are being violated.