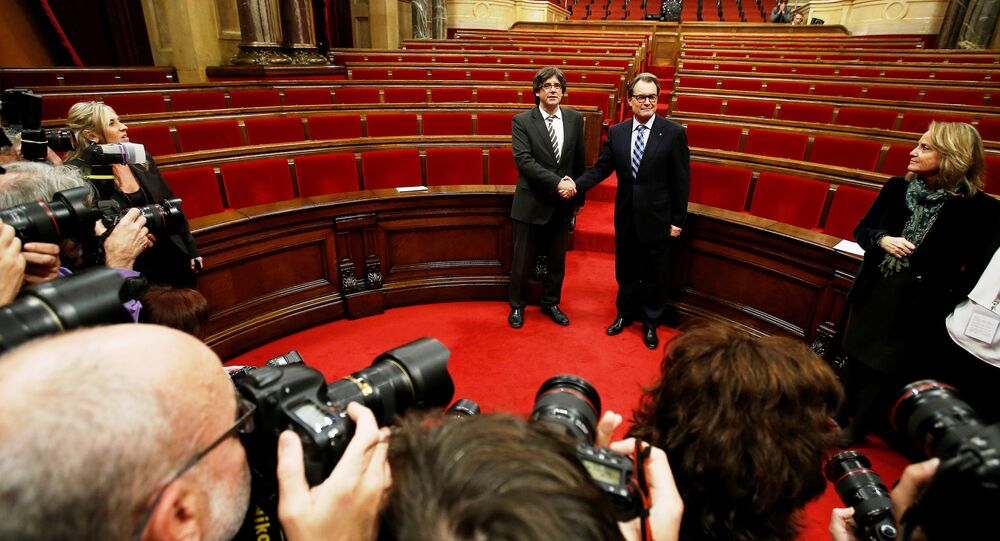 Spanish politics has been plunged into more uncertainty with Catalonian lawmakers electing a new president and outlining plans for independence within 18 months. The development is sure to complicate things further as the major parties try to put an end to the current stalemate.

After months of political wrangling between Catalonia's pro-independence parties, the mayor of Girona, Carles Puigdemont, has been named to take over from acting head of Catalonia's parliament, Artur Mas.

#CarlesPuigdemont is due to take office as President of the Government of #Catalonia tomorrow at 7pm. @KRLS pic.twitter.com/0dcEtiRUou

Puigdemont will lead the majority separatist Catalan parliament, and will spearhead the 18-month road map to independence.

Under the plans, Catalan authorities will approve their own constitution and begin establishing institutions such as an army, central bank, judiciary and other features necessary for an independent state.

While the push for independence has been fiercely opposed by Spain's former government under Mariano Rajoy's Popular Party (PP), developments in Catalonia are also set to heavily impact on the make-up of Spain's next government, with the country still in a deadlock, following the December 20 elections.

Despite winning the election with 123 seats in the lower house, the PP fell well short of an overall majority. Rajoy's chances of retaining power were hampered even more when the proposed coalition with the center-right newcomers Cuidadanos also failed to secure the 176 required to form government.

This means that the despite returning their worst election result since the re-establishment of democracy in 1975 with 90 seats, Spain's center-left Socialist party (PSOE) are now in the driving seat to try and form government.

Following the news of Puigdemont's appointment as president of Catalonia, the PP renewed calls for a grand coalition between them and their traditional foes the Socialists, with senior official Fernando Martínez-Maillo saying: "Now there are no excuses.

"When the new legislature opens next Wednesday, we should reach an agreement among us all to form the broadest government possible of the main parties — the People's party, the Socialists, and also, logically, [newcomer centrists] Ciudadanos, to, among other things, defend Spain's unity," he said.

However, the PP's calls have fallen on deaf ears, with Socialist leader Pedro Sanchez reiterating that he would not support the re-election of Rajoy under a grand coalition.

Instead of turning to the PP, Sanchez said he would seek to establish a "progressive" alliance with anti-austerity newcomers Podemos, who scored an impressive 69 seats, and other small Leftist parties.

The Tricky Question of Independence

While there have been messages of support from both the Socialists and Podemos, suggesting that a coalition between the two could work, there is one major issue preventing the parties from coming together — the issue of Catalan independence.

Podemos, working in conjunction with smaller affiliates in regional areas, have promised Catalans a referendum on independence as part of their election pledge.

While wanting the region to remain part of Spain, the Leftists say that Catalonia is entitled to a vote on its future.

However the Socialists, who say they will not call into question Spanish unity by allowing for an independence vote, have emphatically rebuffed this.

As the parties negotiate and try to find some common ground to form a coalition, there are suggestions that the stalemate may not be broken, and that new elections may need to be called.

The recent developments in the Catalonian regional parliament have once again brought the issue of regional independence to the forefront of Spanish politics, with its effects being felt not just in the region itself, but all over Spain.

Spain's Podemos Leader Refuses to Ally With Any Other Party