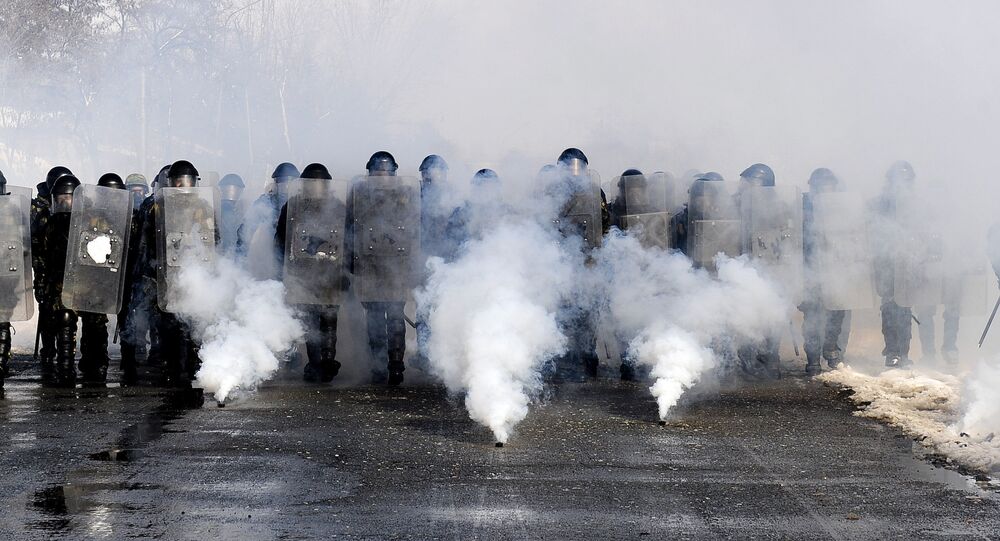 Albanian radicals threw "Molotov cocktails" in the yard of a government building and police cars. Law enforcement dispersed a group of demonstrators from the government quarter in the side streets.

© Sputnik / Maksim Bogovid
Serbia May Ignore Demand for Closer Ties With Kosovo at EU Entry Talks
Kosovo opposition activists on Saturday showered stones and "Molotov cocktails" on to Parliament — the legislative headquarters of the self-proclaimed republic — along with police cars during a rally in Pristina. Several policemen were injured; law enforcement officers are currently trying to push the protesters out of the government quarter, according to Kosovo media.

Another action by three major opposition parties — "Self-Determination", "Alliance for the Future of Kosovo" and "Initiative for Kosovo" — began at 2 p.m. local time. Albanian radicals started setting fire to the parliament building as legislators met inside. Police put out "Molotov cocktails" thrown into the yard and police cars, but police officers were injured by thrown stones.

Over the past four months, opposition activists have been blocking any meetings of the Legislative Assembly of Kosovo. They are protesting against the agreement with Serbia on the establishment of the Community of Serb province communities (MTR). Under the agreement, the MTR should be entitled to self-government, its own flag and other attributes of autonomy. Albanian radicals also contest the summer 2015 signed an agreement with Montenegro on the determination of the state border line.

"We call on all citizens of Kosovo to join us…We are protesting against the aggrieving agreements. We demand to bring to justice to those who have violated the constitution, and we insist on their resignation," Ramush Haradinaj, the leader of the "Agliana for the future of Kosovo" party was quote by RTK media as saying.

In November, a court based in Pristina issued orders to arrest opposition leaders. More than a dozen activists, including the leader of the "Self-Determination" party Albin Kurti and Donika Kadai-Buyupi, the head of the parliamentary group "Alliance for the Future of Kosovo," are currently in custody. Their supporters have repeatedly said that the protests would end until Prime Minister Mustafa withdraws his signature from the agreement with Belgrade and Podgorica.

In late October, the self-proclaimed republic has transferred an agreement with Serbia for review by the Constitutional Court. According to the court's decision released on December 23, some parts of the deal between Belgrade and Pristina on the formation of the MTR, signed by the parties in Brussels, did not quite correspond to the Constitution of Kosovo, but the formation of the MTR could be continued. President of the unrecognized republic Atifete Jahjaga and Prime Isa Mustafa urged Kosovo's political forces to accept the decision of the Constitutional Court, triggering a new wave of protests.