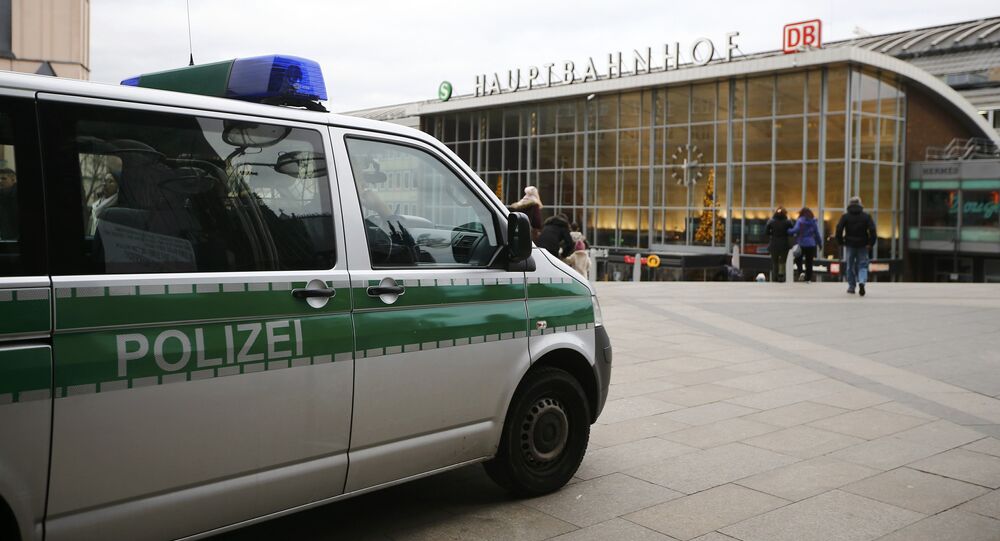 German Police Under Orders to Keep Refugee Crimes Off the Radar

The German police have been instructed not to announce crimes allegedly committed by migrants and asylum seekers, the German press reported on Friday.

© AFP 2021 / Markus Boehm / dpa
All by Myself: Düsseldorf Residents Create Own Militias After Cologne Assaults
The German police have been under instructions to cover up crimes alleged to have been committed by migrants and asylum seekers, reported German newspaper Das Bild on Friday.

"The terrible attacks of sex mobs in Cologne and other German cities have shaken the country. Now ever more crimes by refugees and migrants are coming to light," wrote Das Bild.

As well as allegations from more than 100 women in Cologne that they were harassed, robbed or sexually assaulted on New Year's Eve by gangs of men of Arab and North African appearance, the newspaper reports similar events in other German cities, reports of which came to light days only days later.

On New Year's Eve in Bielefeld an "aggressive sex-mob" of 500 men forced their way into a nightclub and attacked several women, reports Bild. In Baden-Wurttemburg four Syrian asylum seekers aged between 14 and 21 are accused of raping two girls, 14 and 15 years old on New Year's Eve, which was only reported on January 7 after questioning from journalists.

'The sex mob scandal and it consequences: are the police forbidden from telling the truth?' reported Bild on Friday.

​"That a 20-year-old Iraqi and his friends groped a young girl on New Year's Eve in Stuttgart only came out when a police source turned directly to Bild," reported the newspaper.

In Cologne, despite police receiving the first complaints from victims before midnight on December 31, on January 5 local police chief Wolfgang Albers and mayor Henriette Reker still maintained that there was no evidence that asylum seekers were involved in the crimes.

© REUTERS / Wolfgang Rattay
'Beyond Description': Leaked Police Report Reveals Horrific Details of Cologne Sex Attacks
On January 7 police chief Albers was dismissed after it emerged that his force already knew that asylum seekers were largely responsible for the attacks. When announcing the decision, Interior Minister of Nordrhein-Westfalens Ralf Jager said he wanted the police to regain the confidence of the public.

"In fact, a report from the riot police dated January 2 shows that details were taken from 71 people – most of whom were asylum seekers. It is not yet clear whether these people were involved in crimes," Bild reported on Friday.

A police source in Frankfurt explained to Bild why alleged crimes committed by migrants and refugees were slow to come to light.

"Offenses which are committed by criminal suspects who have a foreign nationality and are registered in a reception center we immediately put to one side."

"There are strict instructions from the authorities not to report about offenses committed by refugees. Only direct requests from the media about such acts should be answered," said the police officer.

A spokesman for the Hessen Interior Ministry confirmed the policy.

"The press office managers were advised that right wing extremists could exploit the issue of refugees in order to stoke sentiment against people seeking protection," said the spokesman.

The attacks against women in German towns and cities at New Year come after some similar reports from asylum centers in Germany last year.

In April 2015 Bayerische Rundfunk reported incidences of sexual assault and forced prostitution at an asylum center in Bavaria, which police refused to confirm.

​In October Bild reported that 15 women and children at an asylum center in Hessen had reported being sexually assaulted. Prior to that, in September local welfare organizations wrote to representatives of Hessen's Regional Assembly raising concern about rape, sexual assault and forced prostitution at the center.

"These are not isolated cases," they warned, citing mixed accommodation and sanitary facilities as some of the factors that put women and children at risk.

According to Saxony's Interior Minister, between January 1 and November 30 2015 there were "1006 incidents of brutality and crimes against personal liberty" reported at asylum centers there. These include three cases of manslaughter, 11 of attempted murder and six cases of sexual abuse of children, reported Bild.