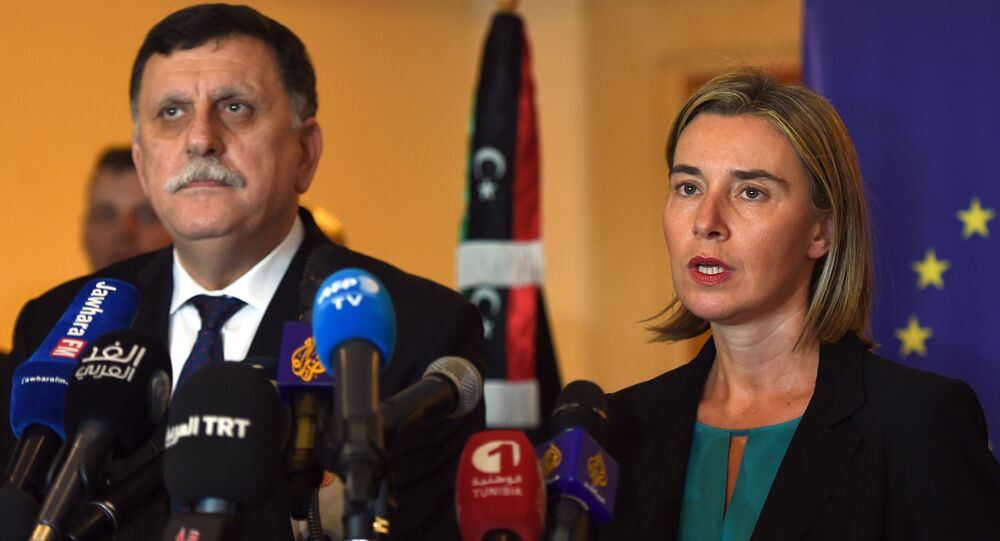 Three weeks after Libya’s warring factions signed an agreement to form a unity government, EU Foreign Affairs chief Federica Mogherini is in the country trying to build support for the new leaders. The move comes amid concerns over a lack of NATO support for Libya’s fight against Daesh.

During her visit, Mogherini plans to meet the newly announced Libyan Prime Minister designate Fayez al-Sarraj and Presidency Council members to "start working with them on the concrete EU support to the Government of National Accord and to the Libyan people".

The meeting comes after rival parties signed a UN-brokered agreement to form a national unity government on December 17.

Libya’s internationally recognized government – that had been forced to flee from the capital Tripoli to the eastern city of Tobruk – last month came to an agreement with Islamist-backed rebels known as the Libyan Dawn, who had seized the capital and set up an alternative parliament in 2014.

The attack in #Libya shows how urgent it is to set aside divisions and work together to fight terrorism, united https://t.co/OovsoSBAAf

It is hoped the agreement will help end a four-year civil war in the country and can provide Libyans with a united front against Daesh, who have taken control of large swathes of territory in the country.

Many have supported the EU’s decision to become actively involved in generating support for the new government, however there are concerns that others in the West may be less likely to help in the fight against Daesh.

© AP Photo / Mohammad Hannon
Libya Post Gaddafi: Enslaved Women, Abducted Children and Illegal Oil Trade
While the 2011 NATO-led military intervention in Libya is widely seen to have been the trigger that plunged the country into a four-year-long civil war, many have been critical of the military alliance’s lack of follow up assistance, as jihadists and extremist groups have been able to take control of significant parts of the country.

Following the removal of former leader Muammar Gaddafi, who was killed by rebel groups working alongside NATO forces, many criticized NATO for not having a satisfactory exit plan to ensure a stable transition into democracy for the country.

NATO Secretary General Jens Stoltenberg described the December 17 unity government deal as "a significant step on the road to bring peace and stability to the people of Libya".

However the military alliance is yet to back the fledgling government and commit supplies to help the fight against terrorists operating in Libya.

Egyptian President Abdel Fattah El-Sisi has been among those critical of NATO and the US for not supporting the Tobruk-based Libyan government throughout the civil war, saying earlier this year that "there is a legitimate [Libyan] government and that government is denied the weapons it needs to confront terrorists".

© REUTERS / Esam Omran Al-Fetori
One of the members of the military protecting a demonstration against candidates for a national unity government proposed by U.N. envoy for Libya Bernardino Leon, is pictured in Benghazi, Libya October 23, 2015.

El-Sisi said that while he supported the NATO intervention to overthrow Gaddafi in 2011, the West failed to implement a proper strategy in the aftermath.

"The NATO operation in Libya was not complete, which led the North African country to fall under the control of militant and extremist groups. We abandoned the Libyan people to extremist militias."