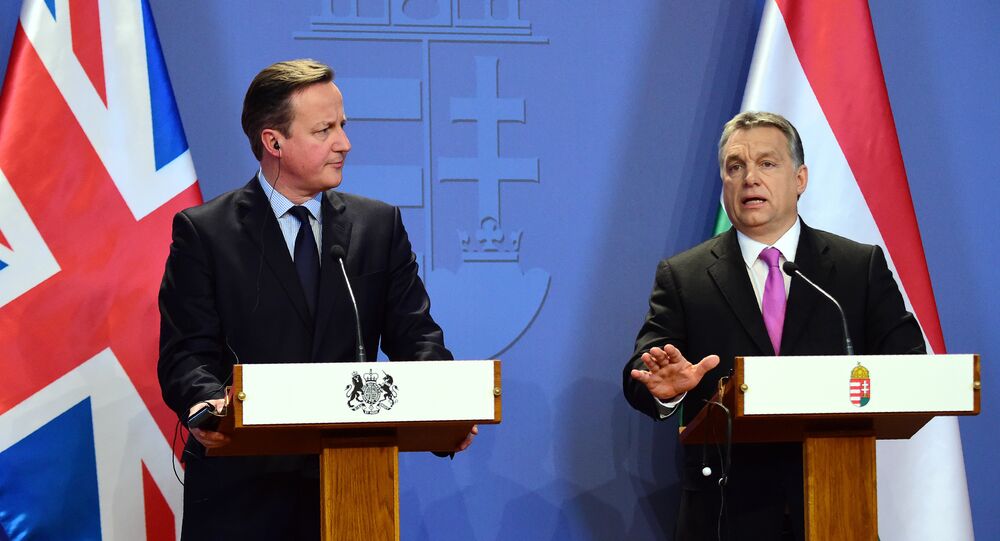 Hungarian Prime Minister Viktor Orban on Thursday called for respect of his country's workers, who were not "parasites" but contributed to the UK economy, amid British Prime Minister David Cameron's proposals to limit work benefits for migrants.

MOSCOW (Sputnik) — A four-year ban on in-work benefits for EU migrants in the UK is one of the major stumbling blocks to the ongoing reform negotiations between the European Union and the United KIngdom. Cameron is seeking to renegotiate the conditions of his country's EU membership before the so-called Brexit referendum.

"We are citizens of a state that belongs to the European Union, who can take jobs anywhere, freely, within the European Union. We do not want to go to the UK and take away something from them. We don't want to be parasites," Orban said during his meeting with Cameron, as quoted by the BBC.

© AP Photo / Valentina Petrova
UK PM Cameron Gives Ministers Free Vote on EU Referendum
Orban said Hungarians "should get respect and they should not suffer discrimination" as they were contributing to the UK economy.

On Wednesday, Cameron embarked on a trip to Germany and Hungary as part of his efforts to reach an agreement with the European Union.

Cameron pledged in the election campaign that led to his Conservative Party's victory in the May parliamentary elections to hold a nationwide in/out referendum by the end of 2017 on the United Kingdom's membership of the European Union.