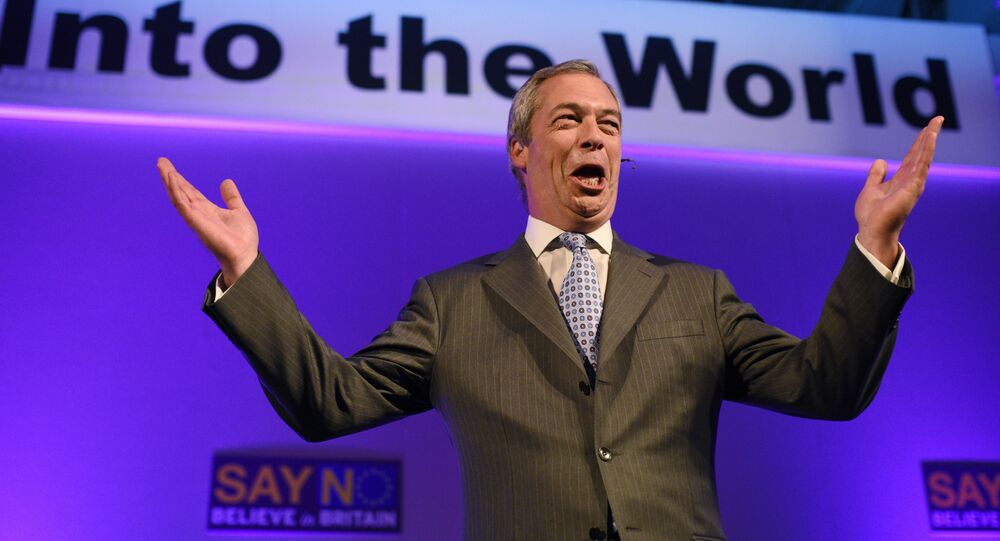 As British Prime Minister David Cameron continues his tour of Europe to try and drum up support for his EU reform plans, back in the UK, politicians on all sides of the spectrum have laid down their traditional quarrels and joined forces to campaign for a Brexit from the bloc.

Renowned Euroskeptic and leader of UKIP, Nigel Farage, has joined forces with Labour MP Kate Hoey and from Cameron's own Conservative party, Tom Pursglove, to say that party politics is "irrelevant compared with this greater cause" of persuading people to vote in favor of leaving the EU.

In The Daily Telegraph, the trio wrote that the issue of EU membership is "the most important political question of our lifetime" and that the referendum on the matter "will determine whether we want to be in a United States of Europe with an EU army, flag and anthem or whether we wish to be a self-governing, independent, United Kingdom."

Issue of EU membership much bigger than party politics. All who want UK to leave the EU must work together. https://t.co/BHUKRbtt6k

​Putting aside traditional party rivalry, the trio added: "Whatever differences there may have been between the parties during the European elections and the general election, these are irrelevant compared with this greater cause.

"We must join forces to make the case across the country — face to face, at the grassroots level, with the people — for Britain being better outside the European Union."

What is your reason for wanting to stay in (or leave) the EU? pic.twitter.com/5WZglBKOFZ

​Cameron Heading to Europe for Support

The extra push for a Brexit comes amid Cameron's increased efforts to gain support from European leaders over his EU reform proposals.

The Prime Minister is to meet government officials in Germany and Hungary this week as he seeks support for some of his more controversial plans.

© AFP 2020 / Ben Stansall
Pro-Europe Lobby in Britain Says Anti-EU Claims Are 'Impossible Fantasy'
In particular, the PM's efforts to try and prevent EU migrants from accessing some in-work benefits during their first four years in the UK has been met with unanimous opposition by fellow member states.

While Cameron's chances of winning support for the proposals appeared to be on the rocks following the EU leaders' summit in December, he has received encouragement in recent days, with Dutch Prime Minister Mark Rutte — a strong ally of Mr Cameron's — saying he was "relatively optimistic" that Britain and the EU could strike a deal at the bloc's February summit.

This followed comments from high ranking German politician Manfred Weber, who said Britain "will for sure find support" from Germany over the plans to restrict EU migrant benefit payments.

"Let us stay ambitious Europeans. We can solve problems better together than alone" @ManfredWeber #bringingresults pic.twitter.com/9FB6I0FrVF

​"This is really a wide European issue of justice," Weber told the Guardian.

"There can be a link with Cameron's initiatives. It's a European issue. Cameron is really creating the necessary pressure on this topic."

While Cameron has not ruled out campaigning for a Brexit himself, he has said that his preferred option is for Britain to remain in the bloc under a reformed EU.

However Farage, Hoey and Pursglove say Cameron's proposed changes are insignificant, and will not have a real impact on the nature in which the UK operates.

"It is perfectly clear, no matter which party you represent, that the Prime Minister's renegotiation is of very little consequence. Nothing major nor fundamental is even on the table, nor up for debate," they wrote.

No-one knows what leaving the EU really looks like — least of all those campaigning for Britain to leave https://t.co/Ovj3qMO4jb

​​While no date has been announced for the referendum on British membership of the European Union, the Prime Minister has announced that it will be held before the end of 2017, and possibly as early as the summer of 2016.