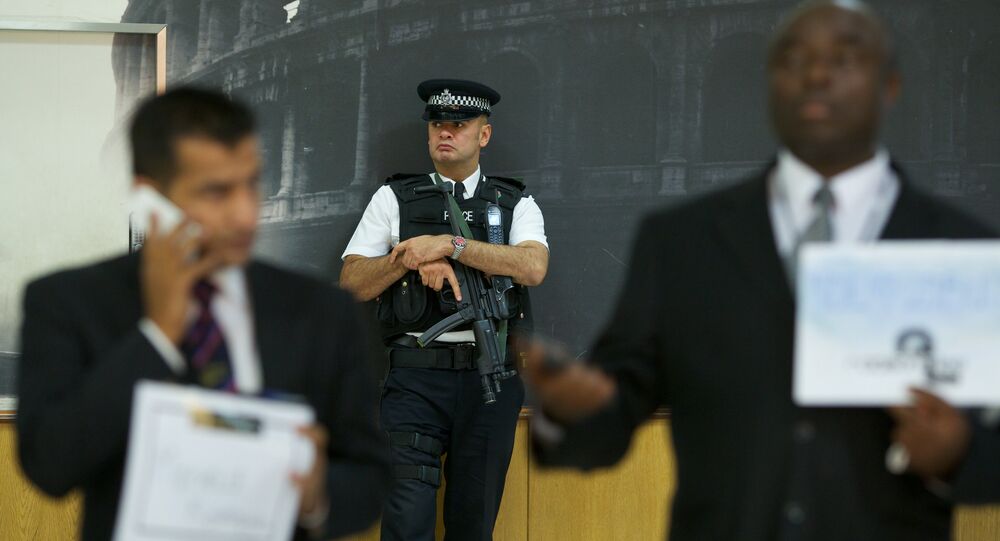 UK intelligence and border protection authorities have been accused of committing "glaring security failures" after it was revealed that five British Islamists linked to a banned extremist group were able to leave the UK despite being on bail or subject to travel bans.

According to UK newspaper the Independent, five men — three of whom have since been killed in drone strikes — all managed to escape from the UK over the past 20 months, despite being under investigation by authorities or having already surrendered their passports.

© REUTERS / Paul Hackett
New Jihadi John: Suspected Daesh Militant Slipped Through UK Security
The revelations have increased scrutiny on national intelligence and security agencies, and comes just days after it was revealed that British Islamist Siddartha Dhar — the man suspected to have featured in a recent Daesh propaganda video — managed to evade border protection authorities when he left the country in 2014.

The 32-year-old managed to leave the UK despite being released on bail for being involved in a terrorist organization.

It's thought that Dhar — who has been dubbed the new 'Jihadi John' — and the five other men who managed to escape the UK all had links to banned extremist group Al Muhajiroun.

Al Muhajiroun are responsible for the majority of radicalised converts in the UK. Woolwich and other terror incidents due to them. #FACTS

Labour MP Keith Vaz, chairman of the House of Commons' Home Affairs select committee, said he would raise the issue with Prime Minister David Cameron, describing the latest revelations as an example of a "glaring security failure."

"The number of cases where extremists and individuals known to the authorities have left the UK after being told to hand in their passports, or who are subject to a travel ban, is astounding. There is no point in the government trumpeting their 'achievement' of 100% exit checks when the people of greatest concern are able to leave with ease," Vaz said.

The revelations have raised questions over the Britain's plan for preventing terror suspects from fleeing the country.

We allow up to 800 jihadis to return to UK but lefties want to ban @realDonaldTrump from coming to the UK How daft can you get? #Crazy

​Many suspects are freed on bail by courts, which makes it difficult for intelligence agencies to track the alleged terrorists. Questions have turned to how these people were then able to evade border checks at airports and ports.

Nick Lowles, co-ordinator for the organization Hope Not Hate, said:

"We have a situation where at least four individuals who were on active bail and must have been known to the authorities as a flight risk have managed to leave Britain. Given all six were linked to banned organizations like Al Muhajiroun, there must be very serious concerns about the apparent ease with which individuals who wish Britain harm are leaving the country."

​The government has defended its actions on preventing suspected extremists from leaving on bail, pointing to new powers that allow police to temporarily seize the passports of people suspected of intending on engaging in terrorism abroad.