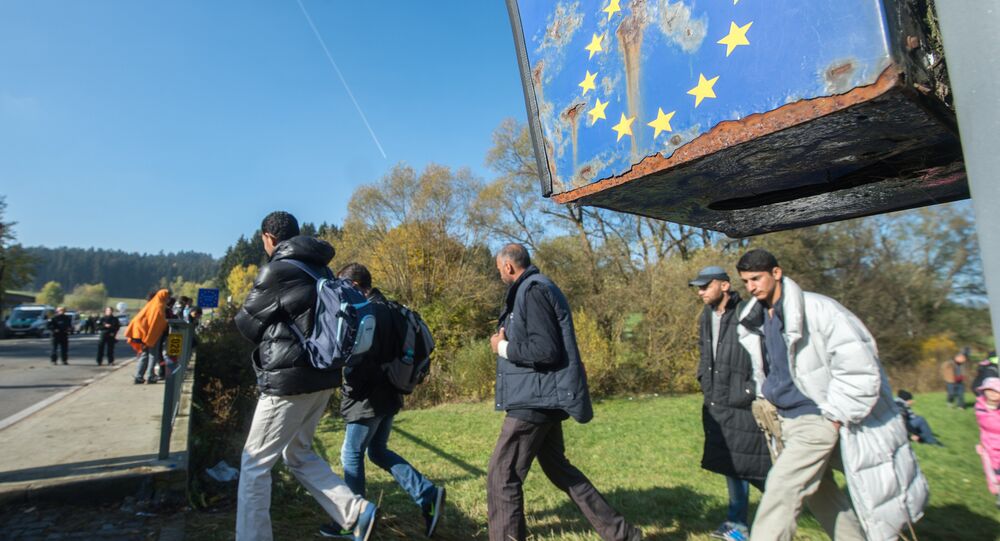 In 2016, Europe will be the ground zero of world's major geopolitical changes, analyst Nouriel Roubini wrote. In his article, he outlined the main risks it may face in the near future.

© AP Photo / Petros Karadjias
European Project Rushing Headlong Into the Abyss - French Newspaper
At the cusp of 2016, the world faces a number of multiplying geopolitical and geo-economic risks, including rising tensions in the Middle East, territorial disputes in China, and the conflict in Ukraine, Nouriel Roubini, a professor at NYU’s Stern School of Business, wrote in his article for Project Syndicate.

What is more, there is the chance of another epidemic, as outbreaks of SARS, MERS and Ebola have appeared in recent years.

Another threat is cyber-warfare, as well as non-state actors seeding chaos from the Middle East to North and Sub-Saharan Africa.

"Yet it is Europe that may turn out to be the ground zero of geopolitics in 2016," he assumed.

Roubini analyzed the actual crises which pose threats to Europe and outlined the main risks which are likely to change the European geopolitical landscape in the near future.

To begin with, a Greek exit from the Eurozone may have been only postponed, not prevented, as pension and other reforms put the country on a collision course with its European creditors, the article read.

According to the author, the so-called "Grexit" could launch the collapse of the European monetary union as investors would wonder which member country will be the next to leave.

© AFP 2021 / Carl Court
Over 50% of UK Residents Favor Brexit - Poll
If a Grexit occurs this would make the UK’s exit from the EU more likely. Compared to a year ago, the probability of a Brexit has increased.

There have been several reasons for this, Roubini noted. The recent terrorist attacks and the migrant crisis in Europe have intensified the UK’s isolationist drive. Under Jeremy Corbyn’s leadership, the Labour Party is more Euroskeptic. Moreover, Prime Minister David Cameron "has painted himself in the corner" by demanding EU reforms that even Germany would not accept.

"To many in Britain, the EU looks like a sinking ship," the analyst wrote.

At the same time, the Brexit scenario would pose a threat to British unity. Scotland may decide to leave the UK, and this would be the end of Britain, the article read.

"This could inspire other separatist movements – perhaps starting in Catalonia – to push even more forcefully for independence. And the EU’s Nordic members may decide that with the UK gone, they, too, would be better off leaving," Roubini assumed.

© REUTERS / Ognen Teofilovski
Europeans Fear Immigration More Than Terrorism - Survey
Another serious threat is terrorism, particularly the growing number of homegrown jihadists. This means the question for Europe is not whether another attack will occur but when and where it will happen, the author underscored. Repeated attacks could sharply reduce business and consumer confidence and slow down Europe’s fragile economic recovery.

The migrant influx also poses a threat to Europe. But the issue is not the million refugees entering Europe in 2015, the article read.

"It is the 20 million more who are displaced, desperate, and seeking to escape violence, civil war, state failure, desertification, and economic collapse in large parts of the Middle East and Africa. If Europe is unable to find a coordinated solution to this problem and enforce a common external border, the Schengen Agreement will collapse and internal borders between the EU member states will reappear," Roubini explained.

What is more, a very important trend of European domestic affairs, according to the analyst, is the rise of populist left and right parties with their shared hostility to free trade, migration, Muslims and globalization.

Currently, leftist parties are in power in such countries as Greece, Portugal and Spain, Anti-migrant and anti-Muslim parties are becoming more popular in Europe’s core, including the Netherlands, Denmark, Finland, and Sweden.

"In short, the distance between what Europe needs and what Europeans want is growing, and that gap could spell deep trouble in 2016," the analyst warned.

According to him, as threats are multiplying across Europe countries are increasingly turning to a national approach, instead of working out Europe-wide solutions to the crises.

Greece Not to Agree to Creditors Unreasonable Austerity Demands - Tsipras