Images of discarded sleeping bags and people curled up asleep on street corners has become synonymous with the refugee crisis in Europe, as thousands of people struggle to find shelter in refugee camps.

However, the number of people forced to sleep on the streets of one of Europe's richest cities has more than doubled in the last five years. In London, more than 7,500 people were found to be sleeping rough in 2015, compared to 3,673 in 2009 and 2010.

The reason, according to homeless charity, Crisis, is due to government cuts to welfare, a shortage of housing and a "longstanding legal injustice" where homeless people are simply not considered a priority.

"I am homeless, not heartless. Thanks for caring." #Streetart #London pic.twitter.com/YKv7ZROdr7

"Worryingly, the number of people who've previously slept rough and are returning to the streets is rising."

Figures released earlier in the year by the Department for Communities and Local Government showed that across the UK, 2,744 people were forced to sleep rough for at least one night in 2014. That's an increase of 14 percent on the previous year.

Here’s what we're hoping government will resolve to make right for homeless people in 2016 https://t.co/DYFj3bqZkH pic.twitter.com/vglJS14MvW

​Meanwhile, the reason for the rise in homelessness in London has been described by Sadiq Khan, Labour's London mayoral candidate, as being caused by a "toxic mix of government failures."

8,000 beds under Clapham North in a WW2 shelter, left unused since the War! Why cant it be used to house the homeless? #London #Homeless

Khan is referring to the cuts to social housing benefits and grants and the lack of affordable housing in the capital.

"Homelessness is becoming an increasingly visible scar on London's streets once again just as it did under the Tories in the 1980s," Khan told The Guardian. 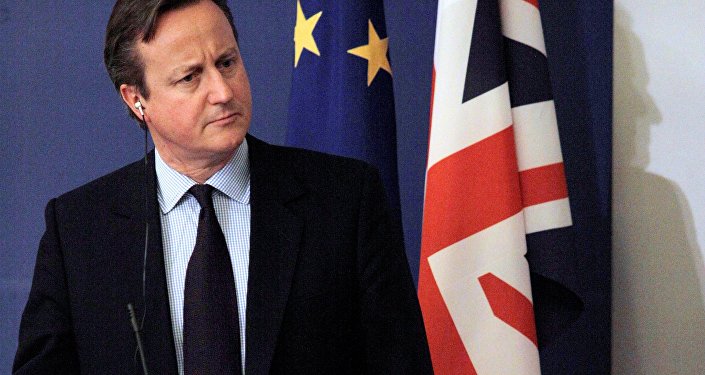 © AP Photo / Valentina Petrova
UK Prime Minister Vows to Combat Poverty During Remaining Term in Office
It's also emerged that a youth centre in London that tries to source emergency accommodation for vulnerable young people in a crisis now frequently hands out travel tickets for night buses to young people if they can't find them shelter. Instead, they spend the night looping the city on a bus.

And it is predicted to get worse. The British government intends to cut housing benefit payments for 18 — 21 year olds in 2017. This means that every young person leaving the care of a local authority, or a foster home at 18 would instantly be homeless, where previously they were viewed as a priority.

UK Apathy Towards Housing Crisis in Breach of Human Rights